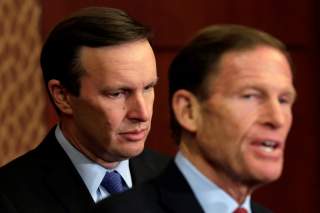 Sen. Chris Murphy and allies appeared in front of the Capitol on Thursday to push legislation that would hamstring President Donald Trump’s ability to unilaterally first-strike North Korea without Congressional authorization. Appearing with Murphy were a gathering of anti-war protestors, including Code Pink activists, and colleagues Sen. Ed Markey, the war hero Sen. Tammy Duckworth, and Rep. Sheila Jackson Lee, a star of Trump-era politics, among others. Co-sponsoring the Senate bill with Murphy is Sen. Cory Booker; both Murphy and Booker are widely believed to have future designs on the White House-- and Sen. Bernie Sanders is on the bill, as well.

The legislation “will make it very clear that, absent an attack or an imminent threat, the president has to come to Congress for prior authorization” to launch a strike on the Kim regime, Murphy told reporters on a call earlier this week. “I think that if we were able to get this very simple resolution on the floor of the Senate, it would pass. … I worry that the president’s enthusiasm will not be checked by the advisors around him.”

Matthew Bunn at Harvard tells me: “Basically, there are no formal procedures to prevent the President from using nuclear weapons.  In principle, he has sole power to order a nuclear attack,” but notes: “There are, however, a number of human beings in the command chain who would have to implement such an order.”

An advisor to the U.S. Army tells me such a situation -- a Pentagon Saturday night massacre -- would be “unprecedented.”

But Thomas J. Byrne, president of the Korea Society, isn’t that worried, recent presidential bluster aside. “The Democratic Senators and Congressmen seem to be in line with Secretary James Mattis and the South Korean Defense Minister, Song Young-Moo,” based on language the two issued last week in Seoul that was “clearly defensive, deterrent and diplomatic,” Byrne told me, writing en route to Beijing.

“I don’t think it’s likely,” Anthony Ruggiero of the Foundation for the Defense of Democracies, a think tank well-connected with the administration, says of a U.S. first strike. Ruggiero tells me: “I think that would be a hard argument to make, including South Korea, whose made it very clear any preemptive or preventive military strike would have to be done with their approval.”

Byrne and others see politics at play. “It seems to me the Democratic lawmakers are political posturing,” Byrne tells me.

“Will never pass. Pointless. It’s showboat politics,” a senior fellow at a national security think tank remarks to me. An aide to a prominent Democratic senator singles out Cory Booker’s involvement: “Most things Booker gets on are automatically not serious.” Says the U.S. Navy advisor: “I’m still convinced this stuff is posturing on both sides. Trump is echoing Nixon’s madman theory.”

But others are worried. “I think there is broad concern about the danger of war,” says Harvard’s Bunn. “President Trump’s warlike rhetoric, undermining of diplomatic approaches -- ‘[Secretary of State Rex]  Tillerson is ‘wasting his time’ -- and general unpredictability have got people rattled. I’ve had people in California call me and ask if they should get their family out of the city.”

Harry Kazianis of the Center for the National Interest isn’t attempting to read the president’s mind, but points out the folly of any hypothetical first strike. “Pentagon sources I have spoken to have been clear--we don't know where all of North Korea's nuclear weapons and missiles are,” Kazianis tells me. “If we were to launch even the most devastating military strike, the chances are high we would have left at least a few nuclear weapons behind.”

And Kim Jong Un would have every incentive to use them for revenge: Seoul, Tokyo, Guam, Los Angeles.

But FDD’S Ruggiero thinks Murphy’s legislation could compromise U.S. national security interests. Ruggiero hones in on the legislation’s language -- prohibiting a strike “absent an imminent threat to the United States.”

“That does not cover our allies,” Ruggiero says. “So, if there was an imminent threat to South Korea or Japan. Under this authority, would the president have to get congressional approval?”

Could this even pass? Murphy says if this can get a floor vote in Mitch McConnell’s chamber, it would even get some Republican support to push it over the top. Sens. Jeff Flake and Bob Corker, the foreign relations chair, have openly called into question the president’s fitness in recent weeks. Requests for comment into their offices went unanswered.

But universal Democratic support isn’t assured, either, despite the president’s pariah status on the left. “It would set a dangerous president if this was passed,” an aide to one of the most hawkish Democratic senators tells me, noting the member is undecided, but that lawmaker “has always been on the side that president shouldn’t be handicapped when it comes to military force.”

There are other efforts underway to curtail the military authority of the president, as well. Markey and Rep. Ted Lieu have legislation that would prohibit the president from using nuclear weapons unless it was authorized by Congress, or if a nuclear attack on the United States or its allies was actually underway. Says Bunn: “Most Presidents would argue that this is contrary to their power as Commander in Chief.  Like the North Korea legislation, this is not likely to become law in the current environment – though there’s a strong case to be made that it’s the right direction to go.”

And on Monday night, Mattis and Tillerson appeared before the Senate Foreign Relations Committee to defend the existing Authorizations for Use of Military Force (AUMF), in effect the president’s charter for continued war against extremism in the Middle East. Tillerson noted that while they would welcome a renewed statement of support for their efforts, it is not necessary, and that a new AUMF that curtailed their autonomy would be potentially calamitous.

But the status quo is not going to cut it for Democrats and even some in the president’s own party who view him as reckless, to put it mildly. And Murphy doesn’t trust Tillerson, oft-hailed by the president’s critics as “one of the adults in the room.”

Murphy told me earlier this year that the former Exxon chief seeks to “neuter” his own department. “I think he took this job knowing that he was going to oversee the dramatic weakening of this department … he's been fairly enthusiastic in that endeavor.”

Critics of the president are clearly disturbed by many of the messages coming out of this White House. But absent a Democratic takeover of Congress in 2018, are their efforts to assert greater authority anything more than political statements-- or auditions to take on Trump in 2020?