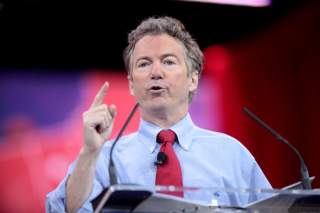 Economics was the subject of last night’s Republican debate in Milwaukee, hosted by the Fox Business Channel and Wall Street Journal. But foreign policy stole the show—specifically, Rand Paul’s brand of conservative realism, which the Kentucky senator unsparingly deployed against Marco Rubio and Jeb Bush. Paul questioned how Rubio could claim to be a conservative when he was for lavish government spending on defense. “I know that Rand is a committed isolationist,” an irritated Rubio shot back.

But Paul was not to be silenced. “How is it conservative,” he asked again, “to add a trillion dollars in military expenditures? You cannot be a conservative if you're going to keep promoting new programs that you're not going to pay for.” Rubio insisted that “the world is a safer place when America is the strongest military power in the world.” Paul refused to concede: “No. I don't think we're any safer—I do not think we are any safer from bankruptcy court. … This is the most important thing we're going to talk about tonight. Can you be a conservative, and be liberal on military spending? Can you be for unlimited military spending, and say, ‘Oh, I'm going to make the country safe?’ No, we need a safe country, but, you know, we spend more on our military than the next ten countries combined?”

Rubio seemed confused by the exchange—taken aback that anyone would question his platitudes, least of all on foreign policy. But Rubio was not Paul’s only target last night. After Jeb Bush and Carly Fiorina called for a no-fly zone in Syria, with Fiorina adding, “I would not be talking to Vladimir Putin right now,” Paul took the opportunity to reply, “I think it's particularly naive, particularly foolish to think that we're not going to talk to Russia. The idea of a no-fly zone, realize that this is also something that Hillary Clinton agrees with several on our side with, you're asking for a no-fly zone in an area in which Russia already flies.”

“So, when you think it's going to be a good idea to have a no-fly zone over Iraq, realize that means you are saying we are going to shoot down Russian planes. If you're ready for that, be ready to send your sons and daughters to another war in Iraq.”

He had received some applause during his clash with Rubio—though less than Rubio did. But the audience was enthusiastically with Paul when he warned against getting involved in another Middle East conflict and concluded, “You can be strong without being involved in every civil war around the world.”

“But if you're not going to respond in a no-fly zone strategy,” Neil Cavuto, one of the moderators, asked, “what would yours be?”

“That's how ISIS grew. We pushed back Assad, and ISIS was allowed to grow in the vacuum. So the first thing you do is don't arm your enemies.” All this might not have been as nuanced as old foreign-policy hands would like, but by contrast with the boasts and bromides of the others, Senator Paul could just as well have been Hans Morgenthau.

Paul was not the only candidate to question his fellow Republicans’ eagerness to get involved in Syria and Iraq, however. Jeb Bush sought to justify a no-fly zone by observing that “If you're a Christian, increasingly in Lebanon, or Iraq, or Syria, you're going to be beheaded.” But he sounded lost and halting as he continued, “And, if you're a moderate Islamist, you're not going to be able to survive either.” Donald Trump shot back, “Assad is a bad guy, but we have no idea who the so-called rebels—I read about the rebels, nobody even knows who they are. I spoke to a general two weeks ago, he said—he was very up on exactly what we're talking about. He said, ‘You know, Mr. Trump? We're giving hundreds of millions of dollars of equipment to these people, we have no idea who they are.’”

“Look at Libya. Look at Iraq,” he continued. “Look at the mess we have after spending $2 trillion dollars, thousands of lives, wounded warriors all over the place—who I love, OK?” Trump loves them so much, in fact, that he proposed America should have kept control of Iraq’s oil and “We should've given big chunks to the people that lost their arms, their legs, and their families, and their sons, and daughters, because right now, you know who has a lot of that oil? Iran, and ISIS.”

Trump the insurgent frontrunner and Bush the former establishment shoo-in for the nomination also differed over Vladimir Putin’s role in the Middle East. As far as Trump was concerned, “if Putin wants to go and knock the hell out of ISIS, I am all for it, 100 percent, and I can't understand how anybody would be against it.” Bush, on the other hand, insisted that “the idea that it's a good idea for Putin to be in Syria, let ISIS take out Assad, and then Putin will take out ISIS? I mean, that's like a board game, that's like playing Monopoly or something. That's not how the real world works.”

Not all of the candidates’ clashes were on foreign policy, to be sure. Early in the night Trump cited the example of Dwight Eisenhower’s immigration policies to show that repatriating illegal immigrants is indeed possible. Bush vehemently objected: “Twelve million illegal immigrants, to send them back, 500,000 a month, is just not—not possible.” What’s more, “they're doing high-fives in the Clinton campaign right now when they hear this. … What we need to do is allow people to earn legal status where they pay a fine, where they work, where they don't commit crimes, where they learn English, and over an extended period of time, they earn legal status.”

John Kasich also objected to Trump’s suggestion, while Rubio—whose involvement in the Senate’s “Gang of Eight” that pushed comprehensive immigration reform in 2013 is a potential flashpoint of opposition to him among grassroots conservatives—was not asked about the subject by Fox’s moderators.

Trump got a question about the Trans-Pacific Partnership trade deal, and much as he seemed to be unfamiliar with the H1-B visa program in the last debate, here he opposed the TPP without seeming to know which other countries were party to it. His comments focused on China’s unfair trade practices and currency manipulation. After Trump finished, Rand Paul had a suggestion for moderator Gerard Baker: “Hey, Gerard, you know, we might want to point out China is not part of this deal.”

Paul used his own opportunity to talk about TPP to cite it as an example of excessive presidential power: “I think, really, one of the big problems we have in our country is, over the last century, really, so much power has gravitated to the executive branch. Really, Congress is kind of a bystander. We don't write the rules. We don't make the laws. The executive branch does. So even in trade—and I am for trade—I think we should be careful about giving so much power to the presidency.” These remarks earned Paul some of his warmest applause of the night.

On other economic matters at the heart of last night’s debate, differences tended to be small. The candidates wanted lower taxes, a simpler tax code, fewer or no IRS agents, and professed opposition to bank bailouts and hikes in the minimum wage—though Kasich acknowledged that Ohio had raised the minimum wage during his governorship. Most candidates excoriated the Federal Reserve as well, with Ted Cruz going beyond his rivals in calling for “keeping our money tied to a stable level of gold.”

Rubio continues to be the darling of the media and neoconservatives, and they were quick to declare him the winner of the debate. As usual, Rubio emphasized his biography and vague talk of a “New American Century” more than detailed policies. If he won the night, he did so by default: his chief rival for the establishment Republican vote, Jeb Bush, failed to distinguish himself—at this stage, he’s just an older, paler, less confident Rubio. John Kasich was most notable last night for interrupting other candidates, and while Carly Fiorina seemed as composed as always during the debate, she was not a focus of attention as Rubio was during the foreign-policy contretemps. Of the moderate or establishment candidates, Rubio fared best.

Cruz also had a good night, but probably not good enough to propel him ahead of Ben Carson in the race to be the religious right’s standard-bearer. Carson made no mistakes that might cost him significant support among the 24 percent or so of Republicans who have been backing him in recent polls, and Donald Trump likewise avoided any missteps that might suddenly affect his numbers.