Conservatives: It's Time to School Obama on His Community-College Ploy 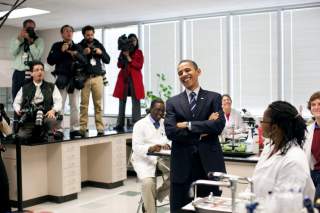 At this point, you’ve likely heard of President Obama’s proposal to make two years of community college free to all students “willing to work for it.” The federal government will kick in three-quarters of the average cost of community-college tuition—at an estimated price tag of $60 billion over ten years—with participating states picking up the difference. The administration says the proposal is modeled in part on a similar initiative in Tennessee, championed by Republican Governor Bill Haslam.

Conservatives have justifiably criticized the proposal on a range of fronts. Rep. John Kline, the Chairman of the House Education and Workforce Committee, pointed out the implications for our nation’s deficit—or for programs that we might have cut to pay for this initiative—saying “unless the president has a responsible plan to meet our existing commitments, he shouldn’t be making new promises the American people can’t afford.”

Sen. Lamar Alexander, the Chairman of the Senate Health, Education, Labor and Pensions Committee, highlighted what should have been obvious to more commentators and journalists covering this issue: There is a big difference between a state implementing an initiative and the federal government nationalizing it. In other words, a federal system of government means that a single Republican governor implementing an idea at the state level should not—and clearly will not—automatically translate into bipartisan support for making that idea federal policy. And there’s always the fact that the Tennessee Promise program has only just begun, meaning we don’t know a thing yet about how it affected student outcomes.

Neal McCluskey at the Cato Institute argued that the distressing performance of community colleges—the graduation rate for first-time, full-time students in the sector hovers around 20 percent—provides good reason to be skeptical. In light of the fact that families earning less than $65,000 a year actually pay no tuition out of pocket, after accounting for existing grants and scholarships, simply spending more money is unlikely to markedly change outcomes for these students. In fact, as McCluskey argues, another infusion of federal money could weaken the incentives of all of the actors in the system—students and schools—even further.

These critiques are important, but none of them fully captures the degree to which the president’s proposal represents a tectonic shift in federal policy. The federal financial-aid system for students pursuing higher education has always allowed students to take their grants and loans to an institution of their choosing. In contrast, President Obama’s free community-college initiative represents the first attempt by a president in decades to move away from that model at the federal level and back to one built on public monopolies.

This is likely an indication of where the politics of higher education is leading. This proposal did not emerge in a vacuum. In fact, dissatisfaction with the status quo in higher education has been growing rapidly amongst the general public, with 57 percent of younger voters indicating they see student debt as a major problem, according to one poll. Likewise, a Rasmussen poll found that 47 percent of survey respondents support President Obama’s community-college initiative (with the caveat that support drops significantly if the proposal is accompanied by a tax increase necessary to cover its costs, a circumstance that we all know will never occur in reality).

Therefore, for conservatives, President Obama’s proposal should be seen as both a warning and an opportunity. It is a warning in the sense that the public might be receptive to larger-scale reforms that move America’s higher education system in a much more government-centric direction. It is true that the government’s intervention in the market is the root of many of the distortions that frustrate students and their families. The federal government’s penchant for handing out loans to students and families with few questions asked creates little incentive for colleges to keep their tuition low, for example. But unless conservatives can advance viable proposals to effectively reform the system, they may find that President Obama’s community-college initiative is only the start of a shift toward a more centralized, federally controlled public option.

And, in that regard, this moment represents an opportunity for conservatives as well. In recent years, a number of conservative policy makers have advanced thoughtful ideas about how to improve the functioning of our nation’s higher-education system. This includes Sen. Mike Lee’s work to break down antiquated regulatory barriers to innovative programs—such as the coding academies that have emerged in a number of cities in the United States—that could likely offer students a higher-quality education at potentially a lower price. It includes Sen. Marco Rubio’s work to streamline the federal-loan system, expand private financing options for students, and provide students and parents with better information about the outcomes of programs they’re considering. Lastly, Rep. Paul Ryan’s call for schools to face a financial consequence when their students default on their loans—giving them “skin in the game”—would bring a much-needed dose of market discipline to a system that sorely lacks it.

But aside from details about policy, this proposal represents an opportunity for conservatives to draw brighter lines in the higher-education debate, to outline two competing visions of what our nation’s higher-education system should look like in the twenty-first century. In his speech announcing his free community-college proposal, President Obama said “at a time when jobs are changing, and higher wages call for higher skills, we’ve got to make sure workers have a chance to get those skills.” Conservatives should second the president’s point about the importance of postsecondary education, while asking whether those workers would be better served by a centrally managed “public option”—built on a system that is demonstrably failing many students currently—or a more dynamic array of providers where each is given a more direct stake in the success of its students.

In order to credibly advance that latter vision, however, conservatives must act now to make it a reality.

Kevin James is a research fellow with the Center on Higher Education Reform at the American Enterprise Institute (AEI), where he researches and writes about higher education financing, quality assurance in colleges and universities, and traditionally underrepresented populations’ access to higher education.Before joining AEI, James worked on a variety of issues as a legislative aide to Representative Tom Petri (R-WI), a senior member of the US House of Representatives Education and Workforce Committee.