Conspiracy Theories Won’t Save America from a War with China 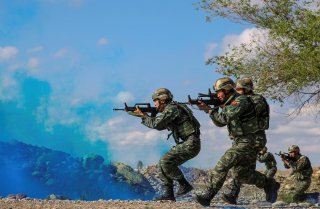 The idea that the United States ought to be getting out of its old wars and not getting into new ones is hot these days. An ideologically diverse coalition has chalked up important wins in the halls of Congress, in the executive branch, in the think tank world, and at the grassroots. Much work remains, but restrainers are playing a strong hand.

Yet some would have us abandon all this for a rat’s nest of conspiracy theories instead. In the world of the conspiracists, the failures of U.S. foreign policy stem not from profound misjudgments, ideological enthusiasms, and the low-accountability chumminess of Washington’s foreign policy elites, but from a network of hidden hands pulling the wool over the world’s eyes. Atrocities abroad are seen as false flags designed to get the American people in a fighting mood; every outspoken victim is a Nayirah until proven otherwise. We saw this in the repeated attempts to find Bashar al-Assad innocent of gassing his own people and see it today in the bizarre effort to paint China’s Xinjiang concentration camps as big vocational schools.

In the world of conspiracists, the indulgence with which Washington treats bloody dictators among its friends is inverted and then doubled, such that the bloody dictators among our enemies become profoundly misunderstood leaders whose worst crimes were really frame-ups by those same dark forces. While rightly criticizing the tendency of some national security journalists to serve as stenographers for the national security apparatus, many of the conspiracists will happily stenograph for other states’ national-security apparatuses—those of Venezuela, Syria, and Russia being favorites.

Worse, the conspiracists offer poor tools for those of us who want to end the endless wars. Implicit in the idea that restrainers must downplay China’s actions against the Uighurs or the possibility that Assad would use gas is a tacit acceptance of the liberal interventionist assumption that such events should dictate our foreign policy. Yet the choice of war or peace cannot hinge solely on technical questions about a particular event. The conspiracists make an error much like the former Bush administration officials who suggest that the blame for the Iraq war is on bad intelligence, not their own bad decisions. Strategists operate in a complex and difficult world where good intentions do not automatically yield good outcomes. Justice is not the only virtue of a statesman. It may be the case that a foreign government commits an atrocity and that it also would be imprudent for the United States to invade, bombard, or sanction. A foreign country may acquire weapons of mass destruction without it being wise, at any point, to attack.

The insufficiency of simple justice is clear in several of the cases today. Washington has few levers it can pull that will lead Beijing to end its destruction of Uighur identity, and pulling some of those levers could come at a high price in other areas. Similarly, the removal of the Assad regime might only redirect the brutality in Syria, as was the case with regime change in Libya and Iraq. Such arguments are more powerful than what the conspiracists offer—not only are they grounded in reality, but they also attack the primacist perspective head-on. America’s confrontational foreign policy has failed. What argument is stronger than failure?

By admitting that other states do bad things, restrainers place themselves squarely in the realist tradition, which expects to see ruthlessness in desperate situations. The realist tradition, unlike conspiracism, is rich with resources for those people who favor a more restrained foreign policy. It sees other states as wily in the face of international pressure, able to resist, and willing to form unlikely partnerships. Thus, realism tends to be skeptical of campaigns to squeeze recalcitrant nations out of the international system. Because realists tend to be very focused on hard power and accordingly to study its application, many are attuned to the limits and uncertainties of using force. And because realism defines the national interest in narrow terms, it counsels against many proposed conflicts. (For example, realism does not see the situation of the Uighurs as one which affects American safety.) This is especially true for the United States, which many realists see as a highly secure state that can sit out most fights. At the bottom, realism is a tragic sensibility: it warns that human action cannot eradicate the world’s ugliness and that those who try may add to it.

Of course, not all restrainers are realists. But some of the other strong currents within Team Restraint are similarly well-equipped to pose objections to new wars without relying on conspiracy theories. Progressives, especially those in the solidarist camp, can highlight the suffering our adventures have inflicted on those abroad and the many uses of American wealth that would be better than new conflicts. Libertarians can point to the truth of Randolph Bourne’s old warning that “war is the health of the state.” Constitutional conservatives can insist that any new war be initiated by constitutional means—that is, by an act of Congress. People all across the political spectrum can appeal to the failures of the last three decades. And even in cases like Nayirah or the second Gulf of Tonkin incident where there really is a man behind the curtain, there is often more than enough in front of the curtain to make the case against a new war.

Conspiracism offers restrainers only error and embarrassment. It pulls us off the solid strategic foundations upon which we can build our case and leaves us to instead rely on grainy videos, fringe science, and the word of dictators. We can do so much better.