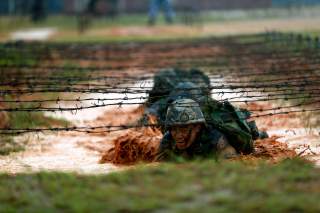 President Donald Trump recently tweeted that, although China was not as helpful as we would like them to be regarding North Korea, “at least they tried.” Contrary to the president’s optimism, China is not trying to cooperate with global efforts to constrain the Democratic People’s Republic of Korea’s (DPRK) nuclear and missile programs. Instead, Beijing continues to support the Kim regime, provide military assistance to DPRK’s nuclear and missile programs, and remains the DPRK’s largest trading power. That is, China wants the international community to believe it’s helping global efforts to stabilize the region, but has little interest in actually doing so. As such, the United States should recognize that any efforts it makes to constrain the DPRK will be futile without full cooperation by the Chinese.

First, it is important to understand why China continues to support the Kim regime and the DPRK’s missile program. After the Korean War Armistice in 1951, China provided resources and assistance to support North Korean reconstruction efforts. This outreach cemented China’s role as a close friend and partner of the ‘hermit kingdom.’ The subsequent Sino-North Korean Mutual Aid and Cooperation Friendship Treaties of 1961, 1981 and 2001 provide legal basis for China’s commitment to supporting the DPRK until at least 2021. Beijing’s commitment to the DPRK is thus legally codified and based on historical grounds—which makes it difficult for China to shift strategy regarding the DPRK.

In addition to previous Sino-DPRK ties, China has little motivation to switch its approach towards the DPRK because it continues to benefit from some aspects of the DPRK’s nuclear and missile programs. The DPRK not only acts as a buffer state between Chinese and U.S. forces in South Korea, but it also provides enough instability to deter further U.S. military action in the region without China having to directly challenge the United States. The Chinese perspective views the United States’ alliances with (or at least support for) Japan, South Korea, the Philippines, Australia and Taiwan as part of a larger U.S. containment strategy aimed at stifling China’s rise as a military and economic power. Thus, in Beijing's view, a unified and democratic Korea would bring United States military power along its Northeastern border and empower the United States and its allies to become more aggressive toward Chinese behavior in East Asia.

It is not in China’s interest, however, for the DPRK’s nuclear and missile programs to become powerful enough that Pyongyang directly provokes the United States into enhancing its presence in the region, as has been the case in the past few years. In the past two years, the DPRK has increased its number of nuclear tests per year and the 2017 DPRK military parade showed off large intercontinental ballistic missile (ICBM) containers that could carry multiple nuclear warheads, which can potentially reach U.S. territory. In response to these provocations, the United States has enhanced its deterrence posture by deploying the Terminal High Altitude Area Defense (THAAD) battery in South Korea and reaffirming its military commitments with allies in the region, leading to increased Chinese uncertainty and distrust of the United States. Yet regional stability remains a core Chinese interest and Chinese leaders have repeatedly expressed their desire for a stable and peaceful Korean peninsula. There is thus some conversation around the notion that Beijing’s tolerance for the DPRK may be starting to wane as China takes a more hard-lined approach to DPRK’s nuclear tests and development of an ICBM.

Recently China has taken several steps that suggest it may be ready to take a stronger stance against the DPRK. Most notably, China has condemned the DPRK nuclear and missile programs at the United Nations Security Council (UNSC), banned coal imports from the DPRK, and threatened to stop petroleum exports. However, these steps are not as productive in constraining DPRK behavior as China makes it out to be.

First, while China may have supported (or, at the very least, refrained from vetoing) a UNSC resolution calling for expanded sanctions against the DPRK in June 2017, the sanctions were the minimum measures the UNSC could’ve taken. Moreover, while China also supported a UNSC resolution in April 2017 condemning DPRK missile tests, the resolution was vetoed by the Russian Federation for seemingly no reason, hinting that perhaps China knew the resolution would not pass. These actions suggest that while China is willing to act as though it is cooperating with multilateral Western efforts to constrain the DPRK, it remains unwilling to implement resolutions that pressure the DPRK to limit its nuclear and missile program.

Secondly, despite Beijing’s announcement that it had officially cut coal imports from the DPRK on February 19, 2017, Chinese imports from the DPRK still increased by 18.4 percent in the first quarter of 2017. This increase in imports suggests that China did not cut DPRK coal imports as part of a strategy to damage the DPRK economy in retaliation for its April 2017 missile test. Instead, the restriction of coal imports aligns with broader Chinese efforts to reduce its manufacturing reliance on coal-power and the country’s slowing growth. For example, this year China shut down the construction of fifteen coal power plants and stopped approving new projects until 2018. Beijing’s utilization of coal-fired power capacity also hit its lowest utilization rates since 1978. That is, China may not have halted DPRK coal imports because it wanted to ‘teach the DPRK a lesson’, but simply because the country no longer has a domestic demand for coal. Furthermore, Chinese threats regarding petroleum exports have similar explanations.

Lastly, China continues to support the DPRK through other channels. On one hand, Beijing provides direct support to the DPRK nuclear and missile programs. For example, the DPRK military parade in April 2017 revealed ICBM carrier trucks made by Chinese state-owned truck manufacturers Sinotruck and the Sanjian Special Vehicle Corporation. These trucks provide DPRK ICBMs the mobility needed to conduct surprise strikes from undisclosed locations in North Korea or to maneuver around potential U.S. counter-attacks, a crucial component to survivability of DPRK missile and nuclear capabilities. Moreover, an Institute for Science and International Security report published in April 2017 reveals a history of Chinese-owned state companies allegedly violating the Nuclear Suppliers Group and Missile Technology Control Regime trade control laws to supply sophisticated machine tools, metals, and chemicals used for ICBM and nuclear-weapons production to the DPRK.

On the other hand, China provides the DPRK the means to keep its economy afloat and maneuver around sanctions. A recent unpublished UN report from February 2017 notes that China aids DPRK’s economy by purchasing its gold and iron ore and continues to allow DPRK banks and firms access to international financial markets through Chinese-based front companies. Beijing also continues to defend the DPRK from media narratives calling for harsher action. For example, after President Trump called on China to implement tougher economic sanctions against the DPRK in April 2017, the Chinese Foreign Ministry cautioned that the United States should not expect China to “squeeze” the DPRK to the “point of instability.” Moreover, Chinese media brushed off DPRK criticisms of China after it halted coal imports and continues to report on the “dangers” of the United States strong stance against the DPRK.

Any actions the United States and the international community take against the DPRK will thus likely be ineffective without full Chinese cooperation. The first step to bringing China into the international efforts is for Washington to figure out exactly what actions Beijing needs to take to adequately constrain the DPRK nuclear and missile programs. Does China need to implement stronger economic sanctions so that the DPRK has no choice but to stop its nuclear and missile ambitions? Should China stop providing raw materials to support DPRK nuclear ambitions to slow the its program until the United States can reopen disarmament talks? Should China increase its deterrence to make the DPRK see that the instability caused by its missile program outweigh the costs of military pride? Or should China better utilize coercive diplomacy to bring the DPRK to the negotiating table?

Once the United States understands exactly how China can be most effective in restraining DPRK nuclear and missile programs, Washington should seek options that convince Beijing to implement these policies. Some methods may be to ask China to freeze DPRK officials’ bank accounts in China to bring the DPRK to the negotiating table, slap financial penalties on Chinese companies that violate trade control agreements to stop providing DPRK with resources crucial to its missile and nuclear programs, or implement secondary sanctions against Chinese companies providing fronts for DPRK businesses. Regardless of what strategy the current administration chooses, it is clear the United States needs China’s help on the issue of North Korea and needs to recognize that, currently, China is not cooperating.

Annie Kowalewski most recently served as a Joseph S. Nye National Security Intern at the Center for a New American Security (CNAS).