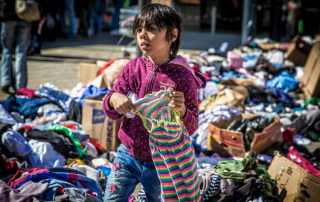 MORE THAN two hundred thousand people have died in the Syrian civil war, and the conflict has produced mass refugee flows and internal displacement. The Islamic State controls large swaths of territory and has taken the war into Iraq, leading to thousands of deaths there. The Obama administration has responded by bombing the Islamic State and, less successfully, trying to build up various rivals to it, particularly in Iraq, but has refrained from a more massive and risky intervention that could either end the civil war altogether or embroil the United States further in a bloody and unwinnable conflict.

Given the dismal record of U.S. interventions in the Middle East, the administration’s caution is warranted. But its cautious approach also rests on the convenient assumption that the conflict will remain contained within Syria’s borders. In fact, civil wars like the one in Syria often shake the foundations of regional orders. They create massive refugee flows, spawn terrorist groups and radicalize neighboring populations. Neighboring states fear these consequences and provide arms to fighters or even intervene with their own military forces in order to secure their interests. Such interventions often worsen the bloodletting and, by changing a local conflict into a regional one, spread the conflict even further.

For both strategic and humanitarian reasons, Washington should focus on more than just the Islamic State. It should also work to contain the violence in Iraq and Syria and the resulting spillover. This involves helping neighboring states police their borders, manage refugees and fight terrorism. It also means discouraging shortsighted interventions. These efforts to reduce the risk of spillover are by no means foolproof (and some will achieve at best limited results), yet they are necessary complements to other U.S. and allied strategies toward Syria and Iraq. If Washington plans to up its intervention in Syria and Iraq by intervening militarily or more aggressively backing the Syrian opposition, it will still take years to achieve lasting success. Containment is necessary in the interim. If, instead, the price of greater intervention is deemed too high, containing spillover is perhaps even more necessary to limit the damage. Moreover, containment is relatively cheap compared with the alternatives, and some of the measures do not require heroic efforts to achieve.

CIVIL WARS often spill over into neighboring states. This problem is particularly acute for more massive civil wars that have large death tolls and produce vast refugee flows. Since the end of the Cold War, conflicts in locales as diverse as Afghanistan, the Balkans, the Congo and Somalia erupted in neighboring states, leading to problems ranging from terrorism to new civil wars.

The conflicts in Syria and Iraq are especially prone to this phenomenon. Politics in the Arab world has long crossed borders, as a common Arab identity is strong while the national one is weak in many states. As political Islam has risen in influence, a shared sense of religious identity has become another source of unity that crosses borders. Sectarianism is an important part of the conflicts, and this has agitated both Sunnis and Shias around the Muslim world. Neighboring states have responded to popular anger along sectarian lines—and have exploited sectarianism to deflect domestic tension.

The conflicts also are at the center of the Arab world, a region of deep strategic interest to many states. Iran is propping up the Syrian regime with massive aid and its own forces. In addition, the Syrian regime has invited in nonstate Shia groups from Iraq and Lebanon to join the fray. Tehran is also working directly with Shia militias in Iraq, fighting the Islamic State but also spreading fear among Iraqi Sunnis that the Shia groups will, as many did in the past, serve as death squads and agents of Iranian influence. Russia, meanwhile, has long assisted Assad’s regime, and as of the fall of 2015 appears to be increasing its on-the-ground support.

The Syrian opposition receives support from Turkey and Arab states like Saudi Arabia and Qatar. These states all oppose Syrian president Bashar al-Assad, but they frequently back different opposition factions and contribute to the rebels’ lack of unity. Of more concern, in February 2015, the head of the National Counterterrorism Center testified that over twenty thousand foreign fighters from at least ninety countries had gone to Iraq and Syria to fight with Sunni groups like the Islamic State, with over 3,400 from the United States and Western Europe. The majority of the rest emanate from the Arab and broader Muslim world.

REFUGEES REPRESENT one form of spillover. Refugees are both a humanitarian and a security challenge. Violence or the fear of violence often drives refugees from their homes, leaving them politicized and vengeful. In their host countries, they are often poorly integrated and have few economic or political opportunities. Not surprisingly, many return to the fray, and the refugee camps themselves can become bases for militant groups of all stripes. Rival groups and threatened states may strike at the camps to stop this or take revenge, expanding the conflict. In Afghanistan, the Taliban emerged out of the Afghan refugee population in Pakistan, and refugees from Rwanda played an important role in sparking the Congolese war, the deadliest conflict since World War II. The Palestinian refugee flows of 1948 and 1967 spawned an array of dangerous terrorist groups, spread instability to neighboring states and led to proxy wars with the Palestinians themselves both victims and instigators.

The Syria conflict is the world’s largest current generator of refugees, and there is no comprehensive plan with appropriate resources for managing them. According to the United Nations High Commissioner for Refugees, by August 2015 the Syria conflict had produced four million refugees, with over 1.1 million going to Lebanon, over 1.9 million to Turkey, over 620,000 to Jordan and over 240,000 to Iraq (many of whom are now fleeing anew as the Islamic State spreads its area of control). The latest fighting in Iraq has led to three million more Iraqis being displaced as of June 2015. Many of the refugees are in camps, but in Turkey, Jordan and Lebanon many have also settled in urban areas. In Lebanon, Syrian refugee camps have at times served as bases for jihadist groups fighting in Syria. In the fall of 2015, the refugee crisis spread beyond the Middle East, with tens of thousands of refugees seeking refuge in Europe and roiling politics there.

Neighboring states, especially poor ones like Jordan and Lebanon, risk being overwhelmed. Many are not able to police the refugee camps or integrate the refugees living outside the camps in urban areas. Refugees are placing an intense burden on their host countries’ domestic services. Jordan, long hospitable to the influx of people, recently ended health care to Syrian refugees outside camps. Lebanon has attempted to solve the strain caused by the refugees by closing its borders to most Syrian asylum seekers. Host countries also have security concerns. In Jordan, most refugees enter through border crossings in areas under Islamic State control, causing infiltration concerns. The camps are likely to exist for years or even decades.

TERRORIST GROUPS thrive because of civil wars. Hezbollah grew out of the Lebanese civil war, and Al Qaeda nurtured itself during the Afghan civil wars in the late 1990s. Movements associated with or inspired by Al Qaeda in places as diverse as Pakistan, Iraq, Yemen, Algeria and Mali all also flourished in civil wars. Al Qaeda in Iraq used Syria as a base area to rebuild; when war broke out there, it joined the fray, eventually splitting into the Islamic State and Jabhat al-Nusra. These are two of the most important rebel groups in Syria today, and the Islamic State has returned in force to Iraq, controlling major cities like Mosul as well as many Sunni areas.

Neighbors are already suffering from terrorism. Over the past year, Sunni jihadists, many of whom are affiliated with Jabhat al-Nusra, have attacked Shia interests in Lebanon on multiple occasions. The conflict has also reinvigorated Lebanese Sunni jihadist groups. The Islamic State has attempted attacks in Jordan and claimed responsibility for the bombing of Shia mosques in Saudi Arabia and Kuwait. Its affiliate groups have carried out operations in Egypt, Libya and beyond.

Jihadist groups are particularly likely to attract foreign fighters, an important form of spillover. Highly ideological and not tied to local communities, these foreigners are often more ruthless and brutal than local fighters, and they in turn proselytize and try to radicalize groups further. Terrorism expert Peter Neumann told CBS News that Syria is the top “mobilizer for Islamists and jihadists in the last 10 or 20 years . . . more people from Europe are being mobilized than in all the other foreign conflicts that have happened for the past 20 years taken together.” If Assad falls or cannot reassert full control over his territory, some will stay on in Syria to try to transform it into what they see as a true Islamic state—one that has no room for Syria’s religious diversity or even for moderate Sunnis. The Islamic State and other jihadists are also likely to aid like-minded groups among Syria’s neighbors, giving them a base from which to train and operate within territory the group controls. Others will return home, and counterterrorism officials fear they will bring their dangerous ideas and skills with them. In the Arab world in particular, returning foreign fighters have been important in seeding new groups in their home countries, making existing groups more radical and otherwise fostering instability.