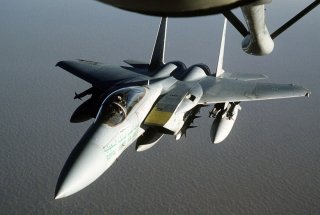 The Saudi-led international coalition operating in Yemen announced late last month it had ended the first phase of its nearly month-long campaign in the country. Though the coalition fell short of its stated goal of returning Yemen’s internationally recognized government to power, it insists that in removing the threat of spillover to Yemen’s neighbors, it has met its primary objectives.

The “mission accomplished” rhetoric may appear to be an example of moving the goalposts to claim success, but a close look at the initial campaign reveals that its ambitions were always limited to containing the conflict within Yemen’s borders.

When President Abed Mansour Hadi was forced to flee the strategic port city of Aden in March, it was clear that the forces loyal to him would be unable to stop the rebel offensive sweeping across the country. The Houthis, allied with forces loyal to former president Ali Abdullah Saleh, had seized the capital Sana’a in September and were rapidly consolidating control over much of Yemen’s heartland. As the government in Sana’a deteriorated, Saleh loyalists in Yemen’s notoriously divided military turned on Hadi, handing the rebels control of several key assets.

In taking Sana’a, the rebels seized several military installations in and around the capital, which held the military’s stockpile of Scud-B and SS-21 Scarab ballistic missiles. Correctly positioned, both of these systems could reach deep into Saudi territory or across the strait to the joint U.S.-French base in Djibouti. A spokesman for the coalition has also suggested that Saleh’s loyalists possess chemical weapons, which could be fitted to ballistic missiles, though evidence of such arms is scant.

Rebel forces also took control of warplanes, based at Sana’a International Airport, which had previously given government forces the edge over the Houthis and against a separate ongoing insurgency by al-Qaeda in the Arabian Peninsula (AQAP). Using these aircraft, rebel forces targeted Hadi in Aden, forcing his retreat. While it is likely that elements of the air force loyal to Saleh conducted the strikes against Hadi, Saudi media reports suggest that Iran has trained some Houthi pilots as well.

Flying unopposed, the rebels enjoyed a substantial strategic advantage over Hadi’s forces, but also the ability to threaten Yemen’s neighbors. Yemen has never had a particularly large or advanced air force, but its handful of MiG-29 fighters are able to carry a range of weapons including Kh-29 and Kh-31 guided missiles (apparently delivered by Russia over a decade ago), which could have been used to strike vessels in and around the country’s territorial waters.

The coalition bombing campaign focused on eroding this edge by closing off Yemeni airspace and striking multiple rebel-controlled air bases and ballistic missile sites. After the first four days of strikes on rebel bases, one Saudi officer claimed that the insurgents “no longer possess any planes and they no longer have command and control, inside or outside the air bases.” However, after weeks of heavy bombing, it appears some ballistic missile stockpiles have eluded the initial waves of air strikes. These include a Scud missile facility on the edge of Sana’a that was struck on April 21, causing a massive explosion that killed 25 and wounded hundreds.

Yemen’s ballistic missiles and fighters, however, were not the coalition’s only concern. By the start of the intervention, Houthi rebels and Saleh loyalists had already advanced far south, making their way to Aden. As they did so, U.S. and British special forces evacuated their posts at Al-Anad air base near the city, removing a vital Western outpost in the ongoing battle to contain AQAP.

As if on cue, AQAP a week later launched a successful raid into the eastern port city of al-Mukalla, freeing some 300 inmates from prison. The group has also reportedly seized a border crossing with Saudi Arabia. The coalition, nevertheless, never responded to AQAP’s gains, while the U.S. has conducted two drone strike—the first killing the group’s spiritual leader. Instead of dispatching ground troops which could reverse the rebel advance, stem AQAP’s resurgence, and attempt to restore order, the coalition—with U.S. assistance— dedicated a significant portion of its efforts to severing Iranian assistance to the Houthis and securing the strategic Bab al-Mandeb strait off of Yemen’s southwest coast.

According to officials in nearby Djibouti, the Houthis’ had reached the strait by early April and begun positioning missiles, artillery, and small armed boats on the island of Perim. Perim sits at the narrowest point of the strait and commands the fourth-busiest oil and fueling shipping bottleneck in the world. According to a Saudi source, “foreign military technicians” were supporting the Houthis on Perim, raising fears that Iran could use the island as a military outpost or supply the rebels with land-based anti-ship missiles that Tehran has previously transferred to other regional militant groups.

In response, coalition aircraft bombed Houthi positions on Perim while Saudi and Egyptian naval forces shelled the island from the sea. The United States and France have also dispatched their own ships, including minesweepers, to preserve free passage for the vital shipping lane. According to the same Saudi source, the Kingdom’s special forces landed on Perim on April 3 and have, for the time being, eliminated the Houthi and Iranian threat in the strait.

Iranian efforts to arm the Houthis through ports up and down Yemen’s Red Sea coast are well-documented. On March 20, for example, an Iranian ship docked at the Houthi-controlled port of Saleef, reportedly unloading more than 180 tons of weapons and ammunition. Other shipments included QW-1M man-portable air defense systems (MANPADS) with which rebels may have shot down at least one Yemeni aircraft in 2011. Amid reports of an Iranian flotilla headed to Yemen two weeks ago, the United States repositioned the USS Theodore Roosevelt aircraft carrier to the Gulf of Aden to deter the ships from docking at Yemeni ports.

That said, Iran could still provide its allies in Yemen with more sophisticated arms such as anti-ship missiles and long-range rockets. It could also attempt to establish a permanent base in the country for the Islamic Revolutionary Guard Corps (IRGC). Either scenario would immediately increase the threat to regional Sunni states and to ships operating in or near Yemeni waters. If, however, the coalition – with U.S. help – retains control of the waters and airspace around Yemen, these threats will be more easily contained. A coalition spokesman’s recent warning that it will continue to target the Houthis as it deems necessary is likely a hint that any heavy weaponry or Iranian aid shipments that it missed are still fair game.

Critics of the campaign have argued that the rebels still retain control of much of the country, and the bombing has done little but spark an emerging humanitarian crisis. Nonetheless, the coalition has succeeded in neutralizing threats that could have otherwise pushed the conflict beyond Yemen’s borders. Achieving the coalition’s stated goal of restoring Hadi’s government would have required a large-scale land invasion, and come at the cost of further enflaming political divisions in Yemen and across the region. Instead, having degraded the rebels’ military advantages and severed their foreign support, the coalition might have created better conditions for a negotiated political solution. However, such conditions could be harder to come by if the coalition airstrikes persist beyond containment.