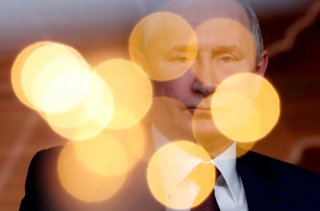 It’s deathly quiet in Moscow now like everywhere else. In a densely populated megalopolis, somewhat akin to New York City, there is little doubt that the coronavirus, also known as COVID-19, could spread like wildfire. Russian leaders seem to be taking the virus with all appropriate seriousness. By dispatching a military, medical team to Italy at the end of March, the Kremlin killed two birds with one stone: making a diplomatic overture, on the one hand, but also enabling its experts to get a first-hand look at conditions in one of the world’s most hard-hit regions, on the other.

For good reason (and again like everywhere else), nearly all of Russia’s news bandwidth is now consumed with coronavirus coverage. And yet, here and there, one can still find some Russian columnists grappling with the epochal announcement made by Russian president Vladimir Putin on March 10, 2020, that he would seek constitutional remedies allowing him to possibly serve for two additional six-year terms. For critics of Putin, particularly in the West, this move did not come as a major surprise, but rather a confirmation that backward Russia would continue in its pattern of authoritarian rule, which has led it astray so many times in the past. A brief look at some of the discussions among Russian commentators follows in this “Bear Cave” [Медвежья Пещера] series about Russian affairs.

Not surprisingly, the opposition newspaper Novaya Gazeta [Новая Газета] took an exceedingly dim view of Putin’s announcement. In a rather stunning rebuke to Putin and his many supporters, that paper published on March 22 a lengthy op-ed titled “Crowbar and Screen: Why Stalin needed the 1936 Constitution [Ломик и ширма: Для чего Сталину была нужна Конституция 1936 года],” which cleverly does not mention Putin’s name. Instead, it makes an effort at reasoning via historical analogy.

The op-ed, written by Vladimir Voronov, leaves no doubt about its target with its sarcastic opening sentence: “‘The new Constitution has led us into some kind of delight at the sight of which the heart beats so joyfully and wants to fly out of the limits of its body.’ This is not Valentina Tereshkova, but rather the collective farmer Fekla Vasilyevna Kobeleva. [That woman] did not fly into space, but wrote to the newspaper in 1936 as part of a nationwide discussion of the draft Stalin Constitution.” To clarify, Tereshkova, the first woman in space, was the Duma parliamentary deputy who dramatically called on March 10 for Putin to be allowed to continue to serve as president. The jarring reminder to Russian experts of the historically perverse absurdity of the occasional Soviet focus on constitutionalism does indeed serve as a potent rhetorical spear. Voronov relates how other Soviet newspapers served up a wide set of progressive alternatives for reforms in the 1930s, including apparently abolishing the death penalty in the USSR, proposing alternatively that “‘any restriction on the press should be considered an act of tyranny’ [всякое ограничение печати следует считать актом тирании]” and that the 1936 constitution might even enshrine the rights of Soviet citizens to travel to “all countries of the world.”

“But it all came to naught with a ‘small’ reservation: it was allowed only ‘in accordance with the interests of the working people and in order to strengthen the socialist system,’” Voronov explains. The Novaya Gazeta author skillfully reminds Russians that constitutional reforms were, therefore, also being discussed during the very darkest chapter in the USSR’s lengthy list of man-made catastrophes. He explains: “The entire first half of the 1930s was the era of continuous reorganization of the repressive machine in attempts to find the optimal shape: the leader needed a more acceptable mechanism for covering up emergency situations and the legalization of his own power.” Thus, the Stalin Constitution was to be “a brand new wrench for further tightening the nuts [в качественно новом гаечном ключе для дальнейшего закручивания гаек].” Voronov reminds readers that the dreaded NKVD was founded in 1934, but Stalin still apparently fretted that “slackness reigned in punitive bodies.” For the brutal Soviet dictator, there was an imperative to consolidate his victory over the “Trotsky-Zinoviev-Kamenev gang . . . [and] create a qualitatively new screen covering the mechanics of Stalinist autocracy.” In any case, such a screen would prove “optimal [for] . . . killing a lot of rabbits at once.”

Voronov notes that there was no real opposition, but at the same time explains that the Russian people had already by then had their fill of Stalin and the Communist regime, so that “everything was on edge.” He states unequivocally to Russian readers that “Unheard of cruelties were committed. Under severe torture, people were forced to ‘confess’ to never-committed crimes [При этом совершаются неслыханные жестокости. Под тяжелыми пытками люди вынуждены ‘сознаться’ в никогда не деланных преступлениях].” The author relates how the discussion on the Soviet constitution ended up, so often: “Collective farmer Chesnokov: ‘We do not need the Constitution, let them open the church to us.’ Chesnokov is arrested." Indeed, it is not coincidental that the most savage year of the “Great Terror” occurred in 1937, after the new constitutional reforms were adopted. Among the hardest hit by the 1937 purges was the Red Army officer corps, ensuring that it would be in a much-weakened state when it had to face the Nazi onslaught just four years later.

One might safely complete this essay at this point. Voronov’s point is brilliantly made and I am quite satisfied to help English-language readers become aware of such stellar, biting articles appearing in Russian-language media. This Voronov fan would additionally be very pleased if such articles about Stalinist atrocities appeared much more frequently in the Russian press. And yet our discussion would be incomplete without some mention of arguments on the other side with regard to Putin’s likely extension.

A glimpse of that more conservative Russian perspective was offered by a March 16 editorial in Military Review [Военное Обозрение], writing under the pen name “East Wind.” That unidentified author notes that the proposed zeroing of Putin’s term, enabling him to stand again for national elections, has “caused a wave of mass production of bile and other liquids in the opposition camp” that is said to be based primarily on “fashion” and “emotion.” With a bit of a sense of humor, an opposition joke is even related that pokes fun at septuagenarian management in late Soviet times, when this Military Review editorial quotes the trendy opposition quip: “Guys from Channel One, please turn on Swan Lake.” But this editorial states very crisply the argument for allowing Putin to continue on: “denying the fact of his popularity and experience is simply stupid [отрицать факт его популярности и опытности просто глупо].” The current Russian constitution, moreover, is said to have been concocted (in the Yeltsin Era) by Washington bureaucrats and, therefore, “did not meet the objective needs of the peoples of Russia, nor the local mentality and traditions, nor common sense.” The author with evident frustration decries the tendency among Russians to be ashamed of being Russian and to become “monkeys of Europe [oбезьяны Европы].” Finally, the editorial makes two substantive arguments. First, it is said countries with frequent changes of government do not necessarily do well (e.g. Ukraine). Second, it is also pointed out that Europe itself has many long-standing leaders. Germany, for example, has seen multiple leaders go well beyond the American norm of eight years to extend to fourteen (Konrad Adenauer), sixteen (Helmut Kohl) and now fifteen for (Angela Merkel). Good leadership in both Finland and Iceland are cited as examples of modern European leaders, who have governed to twenty years and beyond.

Few Americans will be persuaded by this argument and most have long ago decided that Putin represents an implacable foe of the United States. I have long disagreed with that conventional wisdom, but I too was deeply troubled by the March 10 announcement. In the Novaya Gazeta article summarized above, Voronov does indeed paint the sad predicament of Russian history in which vain leaders become ever more insular and even undertake monstrous and paranoid deeds for the perceived “collective good.”

And yet one must admit that contemporary Russia now faces a full panoply of interlocking crises, from the delicate situation with Turkey in Idlib to the on-going complex negotiations over Donbass. Still, these foreign policy crises are almost insignificant against the cratering price of oil and, of course, the nearly unprecedented challenge of the coronavirus. On that critical latter point, Putin has taken a number of resolute and significant steps: closing the entire border with China from an early point, suiting up in personal protective equipment to show solidarity with medical workers, and ordering Russians to “stay at home” for an extended period. In other words, the leadership in Moscow seems to understand the full gravity of the situation.

Americans should try to remain agnostic as regards the internal politics of foreign countries. At present, this is one of the continuous pitfalls of contemporary American foreign policy in practice. Who can say who should wield power in Moscow? It is the Russians, of course, who uniquely understand their specific circumstances and thus are best positioned to decide on their next leader. Admittedly, they have not been blessed with benevolent and far-sighted rulers—the likes of Lincoln, FDR, and Eisenhower. Americans should count themselves lucky, but then again, considering current trends in American politics, perhaps “those living in glass houses should not cast stones,” as the saying goes.