The Contenders for the Ukrainian Presidency 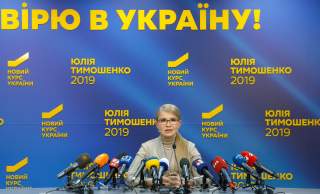 Ukraine's 2018 presidential elections should have been a major milestone in the country’s political consolidation. The “Blue/Orange” divide which had characterized the nation's politics—with successive presidents lurching between pursuing closer ties with the Euro-Atlantic world or restoring closer relations with Russia—is no longer a factor. Despite the conflict which has devastated the Donbass, severed Crimea from Ukraine’s control, and claimed thousands of lives, the silver lining of the conflict with Russia has been to remove millions of pro-Russian voters from Ukrainian politics, which, in theory, should have allowed for a higher degree of consensus on policies designed to reform Ukrainian society.

Instead, we have a free-for-all with more than forty candidates, and a comedian, Volodomyr Zelensky, leading in pre-election polls. The same populist, anti-establishment anger that has propelled other inexperienced newcomers into office across Europe is playing out in Ukraine, where the promise of a revolution of dignity that fueled the 2014 Maidan revolution has not been realized during the tenure of incumbent President Petro Poroshenko. Reflecting concerns that Poroshenko needs to do more to signal his determination to change Ukraine’s traditions of corrupt oligarchical politics, U.S. ambassador Marie Yovanovitch has taken the unusual step of publicly calling on Poroshenko to dismiss Nazar Kholodnytskyy, the chief of the special anti-corruption office who has been accused of using his position to protect, rather than prosecute, Ukraine’s oligarchs. Yovanovitch has noted, “It is increasingly clear that Ukraine’s once-in-a-generation opportunity for change, for which such a high price was paid five years ago on the Maidan, has not yet resulted in the anti-corruption or rule of law reforms that Ukrainians expect or deserve.”

Washington has invested a good deal of support in Poroshenko's government, including training and equipping the Ukrainian military, and does not want to see that investment frittered away. There is concern that Zelensky, despite his rhetoric and enthusiasm, would not be able to translate that into effective governance. And, as is par for the course in the free for all that is Ukrainian politics, Zelensky himself is accused of being a tool of the oligarch Oleh Kolomoisky, and that Kolomoisky would be the power behind the throne of the Zelensky administration.

Meanwhile, former Prime Minister Yuliya Tymoshenko, the heroine of the original Orange Revolution of 2004, and the country's most notable political prisoner during the tenure of deposed President Viktor Yanukovych, is presenting herself as the only figure capable of handling the Kremlin and leading Ukraine. Of course, she herself is accused of having brokered Russia-Ukraine gas deals in 2009, and in turn has lambasted Poroshenko as a closet agent of the Kremlin, who has not done enough to regain control of the Donbass while supposedly allowing Russia to continue to obtain weapons components from Ukrainian factories. The implication of Tymoshenko’s campaign is that she is better positioned to handle Vladimir Putin.

With Zelensky leading in the polls, but no candidate unlikely to crest the 50 percent majority for a first-round victory, which candidates emerge in the one and two positions matters a great deal. Tymoshenko, for her part, has argued that Poroshenko, following a time-honored post–Soviet political tradition, will use the powers of incumbency to secure votes through use of “administrative resources” and will set up a two-man race with Zelensky. Ukrainian voters will then choose to stick with the incumbent rather than choose a protest candidate. Tymoshenko, instead, would rather have the election be a referendum on Poroshenko's competence.

From its perspective, political turmoil in Ukraine suits Moscow’s purposes. Instead of demonstrating Ukraine’s consolidation as a democratic state, even despite Russian intervention, Ukraine’s politics still remain unsettled. Moreover, there are bills looming on the horizon as loans need to be repaid, and the initial inrush of European assistance under the association agreement is now replaced with Ukraine's assumptions of obligations. Finally, despite Washington’s promises, the Russian pipelines to bypass Ukraine are still being built, and the Franco-German compromise on allowing them to move forward guarantees that Ukraine will only have a portion of Russian energy transit revenues in the future. Meanwhile, just as pension reforms have generated political unrest in Russia, Ukraine’s own obligations to the IMF are generating opposition as subsidies are removed and prices for things like energy rise for the average consumer.

If I had to venture a prediction, it is that Poroshenko will ultimately emerge triumphant, to serve a second term—but without much popular enthusiasm and without a sweeping mandate. The question then will be whether Ukraine can succeed in achieving its European and Western aspirations.

Nikolas K. Gvosdev is the Captain Jerome E. Levy chair of economic geography and national security at the U.S. Naval War College. He is also a contributing editor to the National Interest. The views expressed here are his own.