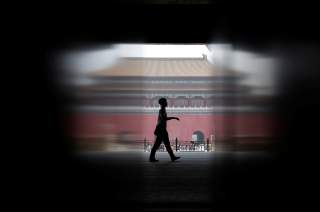 Editor’s note: This is the first article in a three-part series about China’s “Discourse Power” project.

The Chinese Communist party-state recently ordered international airlines to change their website destination lists to convey the false impression that the democratic bastion of Taiwan is part of Communist China. Faced with the possibility of losing access to one of the world’s largest and fastest growing markets for international aviation, the airlines complied.

Being able to control what comes out of foreigners’ mouths is fundamental to the Party’s current multibillion-dollar push for what it has coined its international “discourse power (huayu quan),” an effort the Chinese State Council has identified as a multifaceted strategic imperative. Translating this Foucauldian-sounding neologism huayu quan as “discourse power” reflects the Party’s internationalization of its domestic discourse-practice.

The threats to international liberal-democratic norms from the People’s Republic of China’s (PRC) push for “discourse power” are vastly underestimated because foreigners generally fail to understand the fundamental place of deliberate, persistent discourse construction within the grand Chinese political project. This starts with dismissing the mind-numbingly jingoistic official Chinese domestic political and social discourse as “propaganda” without the least appreciation of its comprehensive and centrally-coordinated workings as well as its long-term effectiveness. Those committed to liberal-democracy must understand the functioning of discourse construction within the Chinese political project (Part I); the tragedy of the Party’s largely-successful zombification of Chinese civil society to host its discourse (Part II); and how China has now turned to enlisting major purveyors of U.S. soft power—the American IT industry, media powerhouses and educational institutions—as its new host organism for its international discourse power efforts (Part III). Americans have been rightfully proud that U.S. soft power has contributed to the universalization of liberal-democratic values. Now, the Party is attempting to turn this same soft power into its host organism and enabler to de-universalize the norm of free expression itself as well as to weaken other liberal-democratic norms.

Since the 1989 Tiananmen Massacre, China has doubled-down on its use of direct state power to discursively construct a China-wide safe space whose internal logic renders the Party indispensable and inseparable from the Chinese state (thus, “party-state”). Any criticism of the Party is unpatriotic, subversive and dangerous. Understanding the existential centrality of this safe space to the Party’s domestic project is critical to understanding how it intends to accomplish the international version of “discourse power.” This requires making a clear distinction between Chinese discourse-construction and the run-of-the-mill falsehoods encountered in liberal-democratic politics at the very level of the nature of truth. It requires an awareness of the historical lessons that the party-state draws upon in setting its resolve as well as ideas of discursive legitimacy that subsist deep within Chinese sociopolitical culture. It requires knowledge of the centralized and dispersed mechanisms of discourse formation that are completely incomprehensible to foreigners but widely accepted as part of everyday Chinese life. Finally, it requires wide-eyed realism as to the diligence and fastidiousness exercised by the Party in guarding a discursive safe space as wide as China itself as well as the Party’s unwavering resolve to do what it takes—including mass murder and cultural genocide—to maintain a discursively-legitimate world for the Party.

Those committed to free-expression as a universal norm must not underestimate the paradigmatic differences between the liberal-democratic versus the Chinese party-state on individual freedom of expression. China has no historical or present commitment to free expression as intrinsically valuable let alone as an inalienable individual right fundamental to human dignity and necessary to the rational functioning of the political process; rather it uses the state’s economic and coercive power to monopolize speech and expression to “remain in power.” Other voices are allowed to speak in a confirmatory or amplifying role only. On matters of concern to the Party, it is not unlike Unity the Collective Hivemind who serves as the single brain for a whole planet of people on the animated series Rick and Morty. There may be many speakers but in reality, it is only one voice that is speaking. Within the China-wide safe space, dignity flows not from individual autonomy articulated as inalienable rights; rather, dignity comes from being one small part of a prosperous, consensus society that is only achievable under stern but loving Party leadership.

One must avoid false equivalencies between the party-state’s single-voice obfuscations and the myriad truthiness challenges that habitually arise among individual self-serving politicians or political parties within liberal-democracies. The latter’s falsehoods are (most of the time) challenged domestically by a free society (ideally) soon after they appear. By contrast, within the party-state’s discursively-constructed safe space, Tiananmen victims must still today be understood as “counterrevolutionaries.” Hardly a single one of China’s 1.3 billion people—including academics and journalists—openly challenges this view, and if put on the spot, most would mimic it.

By contrast, it is unthinkable that the U.S. government could sustain, even for a day, this sort of self-serving narrative on even something like the smaller-scale Kent State Massacre. The vigorous and critical debate taking place over migrant family separations provides another example of how discourse is formed in free societies, even in the face of strong-willed, vocal, and powerful politicians. Whereas dissent is patriotic in the liberal-democracies, China has discursively reconstructed consensus as the patriotic value par excellence. Last year, 1.3 billion Chinese subjects seemed to declare unanimously their rejection of the South China Sea Arbitral Decision. The job of a patriotic public is to not criticize the “Core of the Party Center（dang zhongyang de hexin),” but to cheer his statements. (This is Chairman Xi’s latest moniker, along with “Big Daddy Xi/Uncle Xi”.) With fewer and fewer exceptions, Chinese “public intellectuals” are merely master paraphrasers.

The power to silence and monopolize others’ expression is the power to construct “truth.” Chairman Xi’s “important speeches (zhongyao jianghua)” are memorized by small children and adults, swooned over in “news broadcasts,”as well as noted favorably by “academics” and “research institutions.” Party-state chairmen even get to add a forever phrase to the Chinese “constitution” to make it less likely that successors will diminish their legacies. (The Chinese Constitution is not a real constitution that is respected in court cases against the state by real citizens.) Unlike an American president who can hardly send out a 280-character tweet without starting a nationwide debate, Chairman Xi’s monotonous, “important” three-hour-long speech was met with universal praise across the country’s media (even as the former chairman Jiang fell asleep during it).

The party-state’s current commitment to discourse construction is both a legacy of the Leninist conception of the individual as a means to an end and, more intensely, of the lessons that it drew from the collapse of the Soviet Union, the “Color Revolutions” and the Arab Spring—the fear within corrupt, unelected parties that freedom of expression is a direct threat to their hold on power and existence. Unlike the communist parties of Eastern Europe that demurred when they faced the decision of whether to pull the trigger on their own citizens aspiring for freedom, Deng Xiaoping pulled the trigger in 1989—to the great admiration of Party revisionists today. The party-state then set out with renewed vigor to construct a safe space covering an empire in which not only would non-sanctioned large-scale protests never occur again, but they would no longer even make sense. (It is still almost always okay to riot for a little while against Japan).

China has historically put a greater emphasis on a government’s discursive legitimacy than the West, emphasizing that things must be named correctly (ming zheng) for them to be talked about sensibly (yanshun). The phrase is not concerned with objective truth, but is a surprisingly post-modern-sounding admonition to be discursively consistent.

The Party faced a conundrum after 1989. It had to give up Communism as economic practice if it intended to extract much of the Chinese population from destitution, the basis for its performative legitimacy. But, as confirmed by the trend throughout the 1990s and early 2000s, the Party seemed to be losing legitimacy as a result. To address the inconsistency that arose between a Communist Party (ming bu zheng) presiding over a non-Communist economic and social system (yan bu shun), the Party boldly constructed a comprehensive narrative that naturalized an unelected Communist Party without Communism both as legitimate and indispensable to China’s economic development and future greatness.

Foreign scholars have tended to overemphasize the Party’s reliance on “performative legitimacy” while overlooking the Party’s careful attention to discursive legitimacy or dismissing it as hackneyed “propaganda.” We should, however, take seriously that all young children and college students memorize phrases espousing the party line, and patriotic (and smart) academics loyally repeat them. These party-state dogmas include relentlessly insisting that the party-state follows “socialism with Chinese characteristics in the New Age” and (has always) adhered to “Communist orthodoxy” even though there is hardly anything Marxist about China’s “Communism.”