A Conversation with Bernie Sanders’s Foreign Policy Ally in Congress 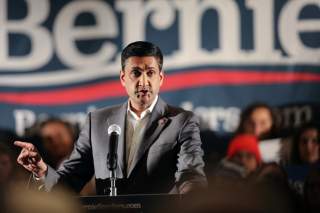 But at the same time, it’s not just the aid situation. Honduras is a political problem. You have serious repression and you have, as we’ve seen from U.S. courts, the government actually being in league with criminal organizations. Is there a way we can pressure these governments?

I think we were too quick to recognize a regime that has been brutal on human rights, and we ought to be prioritizing the human rights situation in Honduras. We have to call the OAS and Mexico and the Pope to stand up, to help guide a conversation about human rights in Honduras, and be supportive of human rights groups and nonprofit groups there.

Moving even closer to home, the presidential race seems to be anybody’s game at this point. We could end up with President Sanders, President Bloomberg, we could have the same guy in the White House a year from now. Regardless of that, there’s definitely a push for Congress to take more of a leading role in foreign policy, and I’m wondering what you think some issues for the future Congress can tackle are.

Congress needs to make sure we are authorizing war and peace. I think that is an emerging consensus, that we can’t be in dozens of battlefields around the world without congressional authorization. So the first thing is that we need to reclaim our power over war and peace.

The second thing is that we need to reclaim our power over the purse. In Germany, for example, their Bundestag has to authorize every increase in troop levels. They actually have the parliament involved in decisions of troop levels. We ought to have a greater involvement in how much we’re funding troops in different parts of the world and have much more accountability in that.

Third, we need to be more engaged in being ambassadors to the world. The reality is that America is going to have a lot of relationships to repair. That can’t just be the domain of the executive branch. I think members of Congress can play a role in showing that we’re not isolated from the rest of the world and that we’re committed to tackling common problems.

We were on a panel, and the panel was about “Westlessness,” the West versus the Rest. I asked [Canadian] Prime Minister Trudeau, “I was born in Philadelphia in 1976, the bicentenary, and I grew up in the Philadelphia suburbs learning about the American founders and American history, but my grandfather spent four years in jail with Gandhi, and that shaped my thinking as well. So does that make me simply a product of the West or some hybrid of the West and the East?”

“What does it mean to have a conception in the twenty-first century of “the West versus the Rest?” Isn’t that framework partly a twentieth-century framework, where we saw two world wars, colonialism, and a Cold War? What we need to be moving towards, and what Munich needs to be thinking about is, “how do we have multiracial, multicultural democracies that are cooperating with each other to solve global problems?” Climate change, disease, the lack of clean water for billions of people?

Trudeau, to his credit, challenged this entire framework. He said that we can’t be presumptuous enough to presume that all universal values are Western values. We ought to be speaking about universal values, and “how do we shape a world consistent with those universal values?”

So I think we need a new framework for the twenty-first century that breaks away from a century that was one of the bloodiest in human history.

And you’re optimistic, despite the rhetoric that we’re moving towards nationalism.

I am optimistic. I’m optimistic because I think the demographics are on our side. We’re not going to move towards a pluralistic world without conflict, and we’re in the battle of moving in that direction. But I’m optimistic over the long run.