Cooperation in the Caucasus: How Four Countries Could Reshape European Security 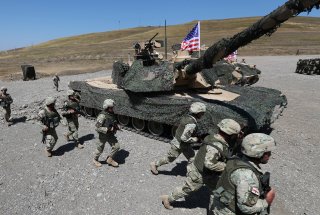 Georgia, Ukraine, Azerbaijan, and Moldova have cooperated in the GUAM regional group for over two decades since the mid-1990s. Two factors brought them together. First, the three countries had frozen conflicts engineered by Russia (Georgia, Moldova) or its proxy state (Armenia in Azerbaijan). During the 1990s, Russian irredentism threatened Ukraine’s territorial integrity and in 2014 Russia invaded and annexed Crimea and unleashed military aggression against the Donbas region of eastern Ukraine. The second was all four countries did not support participation in Russian-led integration in the CIS (Commonwealth of Independent States) and Eurasia.

The Batumi Declaration, forged on July 19, pledged Georgia, Ukraine and Moldova would work together for their “peaceful, democratic and prosperous European future.” “We reaffirm our unwavering commitment to advance further the process of our integration into the European Union through comprehensive reforms to strengthen our democratic institutions, and to progressively approximate our legislation in the relevant sectors with key elements of the EU acquis,” The Batumi Declaration stated. It also noted that Association Agreements with the EU “are key roadmaps for reforms and their continuous implementation constitutes the groundwork for strengthening political association and further deepening of economic and sectoral integration of the three Associated Partners with the European Union.”

The Batumi Declaration re-stated the need for a “European perspective” for Georgia, Ukraine, and Moldova as the best means to provide incentives for them to pursue reforms. Article 49 of the EU’s Treaty of Rome, they believed, classifies them as “European” states and they therefore believe they “may apply to become members of the European Union.”

The Batumi Declaration is in a long line of similar statements over the last two decades by GUAM members and is unlikely to change the reality of NATO and the EU remaining cool towards them joining. Article 68 of the June NATO summit Communique reiterated that Georgia and Ukraine would receive Membership Action Plans, a promise with no timetable or deadline made at every NATO summit since 2008. Meanwhile, the EU’s Eastern Partnership was always premised on providing integration—but never membership—to former Soviet states.

While the US, Canada, UK, Eastern Europe, and the Baltic states support NATO providing Maps for Georgia and Ukraine, opposition remains particularly strong from Germany and France. With the UK no longer a member, further widening of the EU is unlikely to be pursued by Brussels with greater emphasis on the deepening of European Union structures.

Taking the above realities into account, NATO and the EU need to think outside the box with respect to how GUAM’s four members can be anchored within the Euro-Atlantic community of states. As Ukraine’s Minister of Foreign Affairs Dmytro Kuleba recently wrote that “Western capitals also have an opportunity to make inroads in other countries where Moscow historically has held sway. Georgia’s neighbors in the Caucasus, Armenia, and Azerbaijan, deserve special consideration. Getting these relationships right can go a long way toward enhancing trust between the West and Turkey, an important NATO ally.” Kuleba pointed to the “alliance between Azerbaijan and Turkey” as “giving the West an opening to limit Russia’s influence.”

A window of opportunity has opened to do this by two recent developments in the South Caucasus. The first is the signing of the Shusha Declaration by Turkey and Azerbaijan which de facto created a strategic and military partnership between the two countries. The second is a discussion about the opening of a Turkish military base in Azerbaijan.

Both developments present NATO and EU policymakers with a new dynamic in the South Caucasus and more broadly on the eastern flank of NATO and the EU’s Eastern Partnership. Turkey, a long-time NATO member with its second-largest army, is de facto providing a security umbrella over Azerbaijan. After the closure of U.S. bases in Uzbekistan in 2005 and Kyrgyzstan in 2014, a Turkish military base in Azerbaijan would be the only non-Russian military base in Eurasia, a region the Kremlin has long viewed as its exclusive sphere of influence, and NATO would in effect have its first military base in Eurasia.

Georgia, Ukraine, Azerbaijan, and Moldova, with the active support of Turkey—and possibly Poland—could be anchored into the Euro-Atlantic community in a GUAM+ format which would bolster security on NATO’s eastern and south-eastern flanks and the EU’s Eastern Partnership. In this large area, Russia is seeking to integrate Belarus closer into a military alliance which would be a threat to its NATO and non-NATO neighbors while Iran, which has always held irredentist claims towards Azerbaijan, will become emboldened in its anti-Westernism by the likely fall of Afghanistan to the Taliban.

In the same manner, as the Shusha Declaration indirectly provides a NATO umbrella over Azerbaijan, a GUAM+ format could provide a NATO umbrella over Georgia, Ukraine, and Moldova. The United States is increasing its military presence in Poland by redeploying from Germany with Poland becoming the center of gravity of NATO forces in central-eastern Europe. Poland has always viewed Ukrainian independence as vital to its national security. Poland and Ukraine are increasing their security cooperation with Turkey, and both are purchasing Turkish Unmanned Aerial Vehicle aircraft, also known as drones.

Turkey and Poland have emerged as influential players in their respective regions and their cooperation with GUAM+ would bring important advantages to all seven countries. A GUAM+ format would enhance regional security cooperation on NATO’s eastern flank and the EU’s Eastern Partnership at a time when relations are in free fall with Belarus.

Although GUAM+ countries approach Russia based on their specific national interests they have common goals in managing Russia as an existential security challenge. Vladimir Putin’s recent article on the “unity of Russians and Ukrainians” shows the danger of continuing to allow a security vacuum. Although Russia has had to accept the new reality of growing Turkish influence in the South Caucasus and more grudgingly  Ukraine, it is worth stressing that Turkey and Russia have divergent national interests in South Caucasus and Eurasia more broadly. Turkey, for example, has always voted at the UN to denounce Russia’s annexation of Crimea.

GUAM’s military-technological cooperation with Turkey and Poland could alter the balance between offensive and defensive structure of forces in the region. Such a change would drastically increase the costs to Russia of military aggression against Georgia and Ukraine and, if a future crisis led to Russian hybrid deployment against them, the three Baltic members of NATO. GUAM+ could focus on three objectives of support for the territorial integrity of states, security cooperation, and economic integration.

NATO’s June summit Communique reiterated “support for the territorial integrity and sovereignty of Ukraine, Georgia, and the Republic of Moldova within their internationally recognised borders” and called upon “Russia to withdraw the forces it has stationed in all three countries without their consent.” NATO also condemned and would “not recognize Russia’s illegal and illegitimate annexation of Crimea.”

The Batumi Declaration signed by Georgia, Ukraine and Moldova, expressed “gratitude for EU’s firm support to their sovereignty and territorial integrity.” The Declaration declared they were “committed to cooperate with the European Union on common security and defence policy (CSDP), including on countering hybrid threats, strengthening cyber resilience, fighting disinformation, developing cooperation platforms with the EU’s relevant agencies and services.”

NATO, the United States, and the EU have been long absent from the South Caucasus, and other frozen conflicts and ongoing wars in Eurasia, allowing Russia to establish a near-hegemonic domination and play a destabilizing role. In the security realm, the first major focus could be on bolstering the deterrence capabilities of the participating countries. NATO could outsource some collaborative defense projects to Turkey which it could use to bolster the defence capabilities of GUAM members.

GUAM+ members could seek to increase their visibility in the Black Sea, where Turkey is a strategically important country, and the Caspian Sea. Russia has been allowed to close the Azov Sea to Ukraine without any real push back from NATO, the United States and EU. Russia will likely seek to undermine the rebuilding of Ukraine’s navy, which is being undertaken with U.S. and British support after it was either destroyed or its vessels stolen during Russia’s 2014 invasion of Crimea.

The second focus could be on military cooperation with the goal of developing capabilities to deter threats from cyber, informational, and other areas. All of the different facets of hybrid warfare are practiced by Russia and Iran who see pro-Western countries in Eurasia, such as the four members of GUAM, as potential areas for proxy wars against the West.