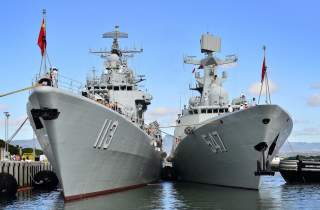 Yesterday, a friend of mine came to me and said he’d heard about China’s seizure of a U.S. Navy drone in the South China Sea. I was delighted that he was interested in this news. I told him it was a big event—bigger than it first appeared. It was qualitatively different from all the other encounters to date between China and the United States in the South China Sea. And I tried to explain to him the significance of the event, how it would affect all of us, and why.

About ten minutes into my talk, my friend got impatient and said, “I have to run in ten minutes. I appreciate all the details you just told me, but I’m not a South China Sea expert; I won’t remember most of them. I probably don’t need to. I just want to understand: what is the situation, what is the problem, and what do you think is the best solution?”

I took his challenge, and here is what I told my friend.

One day, he was robbed at plain sight under his nose on the main street of the neighborhood. He yelled at the robber, “You have violated the law. The equipment is mine. I demand its return.”

The next day, the robber, who owned the biggest house on the street, gave the equipment back to the policeman and said, “I don’t want to see this thing at my doorstep. It threatens my security. By the way, you’ve cried too loud. That’s not good.”

Both the robber and the policeman walked home, but a few onlookers stayed on to discuss what happened. Pointing to the site of the robbery, one of the onlookers said, “It’s a thousand feet from the robber’s house and on the other side of the street. How can he say it’s his doorstep?”

Another onlooker added, “He has drawn a long dashed line on the street to mark the area within which he claims he has historical rights. But the site of the robbery is outside this area.”

A third onlooker commented, “Looks like the policeman waved some big stick. Otherwise, how could the robber return his equipment so quickly?”

But the first onlooker disagreed: “All I saw is the policeman made some verbal protest. And I don’t think he can do anything to force the robber. Remember: last year, when the robber built seven checkpoints in the middle of the street, all the policeman did was increase the number of patrols and ask the robber not to arm the outposts. But last week, some of us looked into them and saw big guns inside. Did you notice that the policeman didn’t call it a robbery? He called it a theft.”

“I don’t think the robber wanted the equipment,” a fourth onlooker joined in. “He returned it because he already got what he wanted. He wanted to rob the policeman of his title, not his equipment.”

Back home, the policeman told his family about what happened. He asked his brothers, “What should I do?”

His elder brother counseled, “Next time you should carry a gun—a big gun—and you won’t be robbed.”

But his younger brother begged for caution. “Look, the robber was violating the law, but he was reasonable enough. He returned your equipment immediately. You have to be very careful with guns. Don’t let any shooting happen. He has a big house nearby and a large family there. If you shoot him, his family will shoot you, and you may be killed. We don’t want you to be killed.”

While the policeman’s family continued to argue back and forth, two residents in the neighborhood talked by phone. The resident on the odd-numbered side said, “The policeman was either unwilling or unable to do his job. We can’t rely on him. We need a new policeman. But none of us can do this job.” Pausing for a moment, he got excited. “But I have a great idea. We should turn the robber into the new policeman. I think he is greedy, but he is also jealous of the policeman. Praise him, make him feel proud of his new job as a policeman, and he’ll be nice to us.”

“But the robber won’t be a normal policeman,” the resident on the even-numbered side countered. “He’ll be a robber-policeman. He’ll make his ‘historical rights’ the new law.”

“Well, if not he, then who can be the new policeman?” the odd-numbered resident asked. “We have no other choice.”

That night, the even-numbered resident called the policeman at his home. But he was not home, so his elder brother took the phone: “I don’t want my brother to be a policeman anymore.”

The resident was shocked, “What? You want the robber to rule our neighborhood?”

“Well, but it’s your neighborhood, not ours. You folks have to take care of yours. We don’t provide a free lunch anymore,” the elder brother responded.

“Look,” the resident tried to explain. “It’s not just our neighborhood, it’s also a main transportation route for your family’s company. So it’s in your interest that it’s safe. We wish we could do the policeman’s job, but we are too weak and the robber too strong. Plus, we all shop at his store.”

“You can’t have your cake and eat it,” the elder brother commented. “We also trade with him. He is our biggest supplier. But he often cheats. He is very unfair. And it’s unfair, too, that my brother has to be the policeman.”

This is the situation right now, and it contains the root of the problem at hand. Now, here’s what the problem is.

Back in the neighborhood, the robber continued to build and arm his outposts and conduct the occasional robbery with impunity. Some people called what he did “unlawful construction and militarization” and “robbery,” but he said he had the right to do things that make him feel secure.

He treated the entire neighborhood as his own backyard. The residents had no other choice but to give in to him. Giving gifts and deference became their standard behavior in relations with him. Anybody who hurt his feelings would be punished ten times harder. He forbade people from calling him “robber”; he smiled when they called him “uncle.”

Some residents asked him to be the new policeman. He said, “I don’t want to be a policeman. That is a title from the colonial era. We’ve sent the policeman home. Our neighborhood is now free of foreign colonial masters. We’re our real masters now. Historically, we’re a family and I’m your uncle. We’ll live as a family and I’ll exercise the right and duty of an uncle.”

The policeman—the old policeman—continued to patrol the street. One day, when he was not on patrol, he was robbed again. But this time, the robber did not return the equipment to the policeman.

The policeman went home and brought back a big gun. Meanwhile, the robber, whom the neighborhood’s residents now called “uncle,” phoned the houses on the street and asked them to fulfill their duty as “nieces” and “nephews.”

When the policeman arrived, he saw a crowd of the residents protesting on the street. They shouted at him, “Get out of here. Your weapon is threatening the security of our neighborhood.”

“I’m not threatening you,” the policeman explained. “I want to get back my equipment, which was stolen by the guy from the big house.”

“Go talk to our uncle,” the residents said. “But you have to leave your weapons before entering our neighborhood.”

The policeman ignored the demand, waving his big gun and entered the street. He went to the house of the robber, but the door was closed. He turned to the checkpoints that the robber built on the street and looked into them, only to see big guns pointing at him. On the street, the residents yelled louder, asking the policeman to leave.

“If you are the policeman, what are you going to do?” I asked my friend.

By now, my friend’s time was up; he had to go. So I could not tell him the third part of the story, which was about the solution to the problem above. But he said he would come back after the holidays, and in the meantime, he would also give some thought to the matter. He will also think about the solution to the problem, and will share his thoughts with me when we meet next time. So stay tuned.

Alexander L. Vuving is professor at the Daniel K. Inouye Asia-Pacific Center for Security Studies. The views expressed in this article are his own and do not reflect those of his employers. He tweets @Alex_Vuving.