The Coronavirus Casts Doubt on the U.S.-Mexico Trade Deal 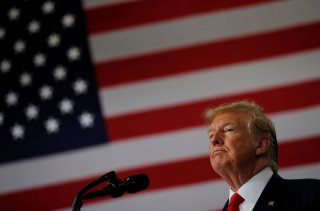 The U.S.-Mexico-Canada Agreement (USMCA) is set to enter into force on July 1—three years after President Donald Trump first demanded revisions to NAFTA.

Reaching a new deal was not easy. Back in 2018, both Trump and Prime Minister Justin Trudeau threatened to abandon talks because of significant disagreements over market access and dispute resolution. Those disagreements were eventually resolved in a deal signed in December of 2019 and the stage was set for a new round of economic cooperation.

The problems start with growing skepticism over globalization. The pandemic lays bare the vulnerabilities of an interdependent world economy. For decades, production spread across the world so widely that very little of what we buy is produced in one country. Under normal circumstances, this allows for lower-cost production and cheaper prices for consumers. However, when market shocks can snap the delicate links in global supply chains.

That is exactly what we’ve seen during the coronavirus outbreak. Governments took dramatic steps to curb the spread of disease, including factory closures, transportation restrictions, and public lockdowns. These measures slowed production within countries and reduced the flow of goods between them. The effects are severe enough that the World Trade Organization estimated that total global trade could fall by as much as one-third in 2020.

The most prominent example of supply shortages is personal protective equipment (PPE) for frontline medical workers. Nearly half of facemasks are produced in China. China’s restrictions on PPE exports, implemented during their own battle with the coronavirus, meant less supply for other countries.

Frustrations with a lack of vital goods have led to increased calls for trade protection, rather than liberalization. This includes recent comments by United States Trade Representative (USTR) head Robert Lighthizer, who testified that tariffs were an appropriate response to the pandemic, arguing that “the things we need to fight the pandemic should be made in America.”

Given these circumstances, it is no wonder that there are questions over the timing of USMCA implementation.

Before the pandemic, USMCA members accounted for almost 30 percent of global GDP and over $1 trillion in total imports. Now, slowdowns across the region have amplified calls for delay. The U.S. Chamber of Commerce, which generally supports trade liberalization, cautioned that American firms need “flexibility” during the “unprecedented economic disruption” caused by the coronavirus.

Skepticism over the viability of the USMCA has been echoed by key industries in the region—most notably, the automotive industry.

Automobile trade has long been a source of contention in the United States. It was a sticking point in several of America’s trade deals. Once Trump took office, he cited the outsourcing of American car production to Mexico as one of the main reasons to implement a border tax early in his administration.

That is why the White House originally touted the USMCA’s new automotive rules as a major victory. The deal includes local content requirements, meaning that 75 percent of automotive content must be made in member countries. At the same time, almost half of production must be done by workers earning $16 an hour or more. Both of these provisions are widely seen as measured designed to protect car manufacturing in North America—and in the United States, specifically.

Implementing new content and wage requirements cannot happen overnight—especially under the current conditions imposed by the pandemic when firms have seen significant revenue drops. That’s why Mexican producers requested a delay in USMCA implementation back in March. Industry organizations cited ambiguity in the rules and difficulties establishing new supply chains needed to comply with USMCA rules.

American car companies shared these concerns. A sharp decline in new car purchases and slowdowns in production—both direct results of the coronavirus—mean car companies are struggling to stay afloat. As a result, the Motor & Equipment Manufacturers Association, along with key members of Congress, lobbied for the delay.

Partly at the behest of carmakers, USTR—the wing of the executive branch responsible for negotiating America’s trade rules—clarified the auto industries’ obligations in June. However, complying with these rules requires time and resources. Those are two things in short supply. Hence, even with new guidelines, industry insiders still insist that the July 1  implementation date “couldn’t come at a worse time.”

The car industry is just one example. Similar sentiments have been expressed by other industries and America’s Commercial Customs Operations Advisory Committee, which recommended delaying USMCA last April.

Wavering support for USMCA comes amid other signs of escalating trade tensions. Trump has threatened new tariffs against China, whom he blames for the severity of the pandemic. At the same time, the White House recently had to walk back comments from economic advisor Peter Navarro that the U.S.-China trade truce was ending.

That rhetoric isn’t limited to China. The United States reportedly plans to reimplement tariffs on Canadian aluminum. The move comes on the back of murmurings that neither Mexico nor Canada are yet in compliance with USMCA.

Taken together, it looks like trade tensions are deepening at precisely the time USMCA members are supposed to work toward a more cooperative arrangement.

Ultimately, there are legitimate reasons to rethink our growing dependence on highly vulnerable supply chains. It may be perfectly sensible to increase the capacity in vital goods necessary to maintain public health and national security. At the same, the economic consequences of the coronavirus have to be taken seriously. It can’t be overlooked that the United States saw unemployment rise to levels unseen since the Great Depression. Many people, including the original NAFTA’s opponents, think trade deals will make these problems worse, not better.

Either way, the controversies over USMCA, which the White House claimed a major foreign policy victory, appear to be far from over.

Jeffrey Kucik is an Associate Professor in the School of Government and Public Policy and James E. Rogers College of law (by courtesy) at the University of Arizona.