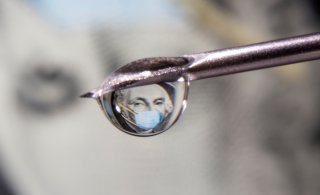 The global economy is heading for a major financial crisis. If worst comes to the worst, then it may be like the Wall Street crash in 1929. Possibly with equally devastating political and economic consequences opening the door for populism. The debate about economic policies to get us through the coronavirus is therefore far more than just the trajectory of economic growth.

In the United States, Paul Krugman and Lawrence Summers disagree on whether President Joe Biden’s stimulus of $ 1.9 trillion will lead or will not lead to an output gap opening the door for inflation in the goods and services market. In Europe, economists disagree on whether servicing the debt mountain constitutes a sword of Damocles forcing the economies to their knees.

The calamity may, however, enter through another door. The lax monetary policy combined with fiscal stimulus has flooded the economy with liquidity. The intention is pure Keynesian saying that if private demand falters, the public should step in to keep total demand unchanged. So far so good.

Unfortunately, this, in theory, correct policy, aborted because those who got their hands on the money were those who already had enough and not those who lost in the first round of the coronavirus pandemic. These people see no need to buy more goods and services. Instead, they plow the money into the asset market such as stocks, property, bitcoin and similar investment objectives not being part of the productive economy.

Asset prices have shot up. Anyone doubting that this is an abnormality should try to explain why stock markets and property markets can be at an all-time high at the same time as the Gross Domestic Products (GDP) plummets globally with around 3,5 percent and 4.9 percent in advanced economies. Disregarding sophisticated economic theory and turning to common sense this is unsustainable.

As economics teaches, the ultimate goal of any economic activity is consumption. Therefore, accumulation of wealth constitutes a claim on GDP to be converted into goods and/or services when the asset holder so wishes. In a stable economy—in a kind of equilibrium—the relationship between wealth and GDP allows economic transactions to transit from the asset market to the good ad services market without disrupting effects on the economy as a whole. The amount of wealth, asset owners wish to divest themselves of, can be converted into goods and services at unchanged prices.

Sooner or later this mismatch will dawn on wealth owners. They will then react as they did at the Tulip Mania in 1637 and the Wall Street crash in 1929 by a massive sell-out, which will suppress prices, rob a good many of a considerable part of their wealth and make it impossible to pay back loans entered into when interest rates were close to zero. The spillover on the real economy will follow an analogous pattern with falling demand for goods and services pushing the world into a recession, if not a depression.

The question is when this will happen. It will depend on the combination of further asset inflation and the recovery of the real economy. If the world gets back fast on a growth trajectory, like the one before the coronavirus, then it may be able to buy some time. If, on the other hand, global growth stays below the pre-coronavirus times, widening the gap between the amount of goods and services and rising asset prices, then it may happen quite soon. A joker in the game is the U.S.-China relationship. The political dispute has soured relations between the two largest economies and if it impacts on the economic and trade climate, then investors may wonder whether the time has come to wind down some of their investments. A third worry is bankruptcies in the heavily indebted (public and the corporate sector) Emergent Markets and Developing Economies, which may drag down financial institutions in the rich countries. A fourth concern is the uncertainty of the banking sector forced to accept deposits without any prospect of normal lending activity. It must surely be in a vulnerable position if things start to go wrong.