Coronavirus Countdown: Will the Pandemic Push Algeria Into an Economic Crisis? 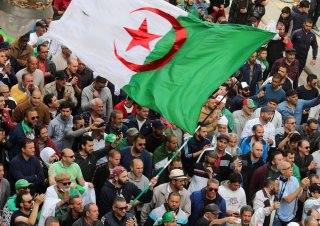 The last several years have been not easy for Algeria. The country has undergone considerable political turmoil and the economy has underperformed. Now Algeria’s precarious economic and political situation is being hit hard by the growing presence of the coronavirus. The economy, which was also slammed by the recent Russian-Saudi price war, is now expected to contract 5.2 percent for 2020. Algeria is one of Europe’s major natural gas suppliers and sits in a region marked by the large flow of migrants from Sub-Saharan Africa, factors that elevate its geopolitical importance to the European Union, especially France and Italy, which are major trade customers and would be on the receiving end of any new waves of migrants.

According to recent projections from the World Health Organization, over 190,000 people across Africa could die in 2020 from the coronavirus pandemic if crucial containment measures fail. Based on the latest African data from the BBC, South Africa has the highest number of confirmed virus cases—more than 8,200 cases and 160 deaths—but Algeria has the most reported deaths at 483. Considering the opacity around much of Algeria’s official data, it is suspected that the death count could be higher.

Algerian president Abdelmadjid Tebboune addressed the nation on March 17 announcing broad measures to fight the virus. These included curfews, the closure of all schools, universities, and mosques as well as the shutting of land borders, suspending sea and air connections, and prohibiting protest marches and rallies. Several days later, the Hirak, the popular protest movement, recognized the escalating harm to the nation’s general welfare from the pandemic and finally ended its weekly demonstrations after more than thirteen months across Algeria’s major cities. The demonstrations had begun in mid-February 2019, a few days after former president Abdelaziz Bouteflika announced his candidacy for a fifth term. Realizing the need for political changes, the military, the country’s main powerbroker, orchestrated Bouteflika’s resignation in early April 2019 that led to Tebboune’s victory in the December general election. Bouteflika, in his early 80s, had long been ill and was regarded by many Algerians as a fig leaf for military rule and endemic corruption.

The pandemic’s dramatic consequences have halted the government’s major reform plan announced in February. Called “a new deal for a new Algeria,” the plan was to “cleanse the disastrous heritage” of past governance with proposed constitutional amendments and legislative elections by year-end. However, the opposition parties and Hirak immediately saw those plans as shallow attempts rather than moving toward the implementation of true reforms.

There is a risk that if the anti-pandemic measures by the Tebboune government fail, it will further jeopardize the government’s already scant legitimacy. While threats from the pandemic will likely increase, citizens will be forced to observe lockdown measures quelling demonstrations over the near term. However, the lockdown has brought the economy to a halt, pushing up unemployment and uncertainty over peoples’ livelihoods. Moreover, once the pandemic comes to an end, Hirak will be expected to resume its demonstrations.

While Algeria’s domestic political situation remains tense, the Chinese government in April sent needed medical supplies and a team of medical professionals to Algiers to assist the government in its battle against the coronavirus. Beijing’s assistance also reportedly includes plans for a new hospital to care for approximately ten thousand Algerian and Chinese employees of the local operation of the China State Construction Engineering Corp., which directs many new infrastructure projects across Africa. In recent years China surpassed France as Algeria’s main commercial investment partner to build roads and railways, aside from infrastructure upgrades in the hydrocarbon sector (which is still dominated by European firms).

China’s growing engagement in Algeria stems from China’s original recognition of Algeria following its independence in 1958. For China, Algeria is an important energy producer and well worth what has been a long term investment. In January 2020, Chinese exports to Algeria totaled approximately $550 million, equal to 20 percent of total imports. Although Italy and France remain Algeria’s top trade partners, China has become the main source of the country’s imports. According to the IMF, in 2019, Algeria imported $4.6 billion of goods from China, ahead of $3.8 billion of French goods and $2.4 billion of Italian goods.

And, Algeria needs a steady customer like China. The recent collapse of hydrocarbon prices has placed tremendous pressure on Algeria’s national and external accounts. As an OPEC member, Algeria supported Saudi Arabia, Russia, and other major crude oil-exporting nations’ recent agreement to limit daily production levels. In the face of radically reduced hydrocarbon prices, the government recently announced a 50 percent reduction in the state 2020 budget, citing that current market conditions require “urgent structural, economic, and financial reforms.” The original budget was based on an average crude oil price of $50 a barrel; however, according to Reuters, Algeria’s Saharan Blend has recently been trading around the $20 billion level.

Algeria continues to rule out approaching the IMF for emergency funding based on its short-term plan to rely on domestic borrowings. However, that plan is not without challenges—unpopular cutbacks could risk social and political stability. Unemployment levels and consumer prices have reportedly risen dramatically during the pandemic crisis. Moreover, as an already weak hydrocarbon export-dependent country, the government will be hard-pressed to meet the annual food import bill of $6.0 billion without possible concessions and other generous terms of trade from its established economic partners, especially among the European Union. That predicament further raises Algeria’s profile among the most at-risk food security countries.

The fluid Algerian situation bears watching. In addition to the heightened challenges stemming from the dual challenges of the uncertainties among hydrocarbon markets and the rising levels of the coronavirus infections that threaten the country’s general welfare, Algeria bears the perpetual security contagion risk of its proximity to unstable geopolitical developments in its neighborhood, including Libya, Mali and Niger. The prospect of greater flows of desperate refugees penetrating Algeria’s relatively porous eastern and southern borders presents a rising challenge for the Tebboune government, which could further destabilize the country’s already delicate political and socio-economic system. A major disruption in Algeria’s gas and oil fields could have a negative knock-on impact on Europe.