Coronavirus Is Creating A Dangerous Ethical Choice For Doctors 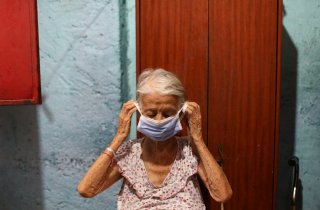 My colleague is sixty-two years old. He is in a nursing home because he is in an advanced stage of Alzheimer’s disease. He does not recognize his wife nor his children. He is sedated and sometimes tethered to his bed because he is turning violent. His chances of recovery are sadly zero. I am ninety-one, fully employed, just published a book that received decent reviews, direct an NGO, get to express ideas on these pages, and love and am loved by a large family. Who should receive a ventilator if both of us are hospitalized, and there are not enough vents to go around?

If physicians follow some ethicists and medical guidelines, my colleague may be preferred, based on the correct assumption that age correlates with illness and the ability to recover and contribute. However, medical decisions should be made on the basis of cases, not statistics. Survivability and the ability to contribute, widely understood to include being able to give and receive love, are the preferred criteria.

Texas’s lieutenant governor has suggested that grandparents should be willing to risk death from the coronavirus in order to prop up the U.S. economy. He stated, “No one reached out to me and said, ‘as a senior citizen, are you willing to take a chance on your survival in exchange for keeping the America that all America loves for your children and grandchildren?’ And if that’s the exchange, I’m all in.” Medical doctors at the Italian College of Anesthesia, Analgesia, Resuscitation and Intensive Care predicted that “[i]t may become necessary to establish an age limit for access to intensive care.” Similarly, in the United States, “[d]octors as various institutions said they did not yet know what the triage policies would be but they had been discussing the matter with colleagues. Some said they expected that in a shortfall, they would likely be reluctant to give ventilators to people over a certain age.”

U.S. ethicists used to hold that one should save the lives of those who can do the greatest good. However, in recent years, the consensus has shifted from maximizing lives saved—to maximizing life years. Thus “Saving one child may outweigh the ‘good’ of saving two elderly adults, according to the cold arithmetic of life expectancy.”

The family members of Rong-Hua Xie and Mei-Chun Huang, two eighty-eight-year-old patients at New York City’s Elmhurst Hospital Center, were told recently that neither will get a vent because the hospital has “… not had success with them with people of advanced age.”

Age-based triage is included in official guidance in some states plans for dealing with the pandemic.  According to the Washington Post, “[s]ome state recommendations […] explicitly exclude access [to ventilators] for older people, with access barred to those ranging in age from 65 to 85.”

The role of age in healthcare rationing has been debated for a long time. A leading figure in this debate has been Daniel Callahan, a renowned ethicist and a cofounder of the prestigious Hastings Center, which specializes in bioethics. He often co-authors with Sherwin Nuland, a physician. They called for a ceasefire in America’s “war against death,” arguing that those who surrender gracefully to death “may die earlier than [is now common], but they will die better deaths.” They urge the medical profession—and ultimately, the American people—to undergo a cultural shift they believe is necessary to prevent the otherwise inevitable financial failure of our healthcare system. This shift will replace a “medical culture of cure” with a “culture of care.” They held that “rationing and limit-setting will be necessary” to bring about this change. They advocated an age-based prioritization, giving the highest priority to children and “the lowest to those over 80.”

In a 2009 interview, Callahan advocated that those who “have lived a reasonably full life of, say, 70 to 80 years,” should get “high quality long-term care, home care, rehabilitation and income support, but not extraordinary and expensive medical procedures.” That is, we should ration healthcare for our elders, granting them mainly ameliorative care. In other texts, his argument is more hedged. However, he tends to hold that quality of life is more important than length of life, especially given that the last years of our lives are miserable, as our minds wander, and we are beleaguered by incurable diseases. Otherwise, our futile battle against death “may doom most of us ... [to an end] ... with our declining bodies falling apart as they always have but devilishly—and expensively—stretching out the suffering and decay.” Callahan and Nuland hence determine that the cutoff point, the age at which we should put our elderly on ice, is eighty.

One ought to note that, if the rule limiting those above a certain age to receiving mainly or only ameliorative rather than therapeutic care—one that treats age-based rationing as morally justifiable—is implemented, the age may well be ratcheted lower if we are short on medical supplies. Thus, it can be reduced to say seventy-five in parts of the county that are especially hard-hit, maybe still lower. And if other countries are to follow such a model, they will surely have to set a lower age. sixty-five for El Salvador, and fifty-five for Niger? The possibility that using age-based rationing to ratchet down care will lead to troubling outcomes is far from mere speculation. For example, even before the current crisis, in Britain, people older than fifty have been discouraged from seeking kidney dialysis treatment!

True, so far the majority of the ethical and medical guidelines are not age-based but urge those who must ration healthcare to base decisions on the capacity to survive or to lead a meaningful life. However, one cannot ignore that physicians these days must act under great pressure, fatigue, and stress. They may be tempted to use age as a simple criterion that measures the ability to survive and lead a meaningful life. To the extent that guidelines explicitly state that age per se is the wrong criterion, we shall avoid such unfortunate choices. Indeed, doctors best follow the guidelines already widely employed by the providers of hospice care, which is the kind of care Callahan and Nuland recommend, ameliorative and not therapeutic. It is given only to those whose doctors have determined that their health conditions indicate that they have less than six months to live, whatever their age.

Amitai Etzioni’s response to Callahan and Nuland’s article on health care rationing is available here. He is a University Professor and professor of international affairs at The George Washington University. His latest book, Reclaiming Patriotism, is available for download at no cost.