The Coronavirus Has Exposed the Dark Side of Communities 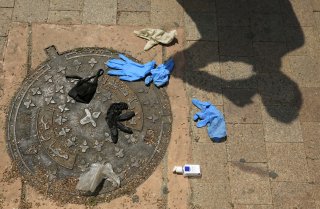 If you think the communities are places where people help each other, volunteer, and raise a barn, then you will find that the pandemic reveals a much more complex, and sometimes darker, side of communities. These communities sometimes harass people who violate the prevailing norms or challenge their rules. They also face great difficulties in balancing the rights of their members, especially their privacy rights, with their concerns for the wellbeing of the community, these days, in particular, preventing the spread of the coronavirus. There are few places this phenomenon is more evident than in the homeowner associations (HOA) in which some fifty-five million Americans live. These associations love to make all kinds of regulations, above and beyond those set by the laws of the land, some of them quite capricious, while others are truly vital.

One of the big “scandals,” which ripped through the HOA in recent weeks, is that members had the audacity to ask for refunds after their golf courses were shut and their communal swimming pools were emptied! “This isn’t a Marriott or Ritz Carlton where you can ask for a room night refund if you have a bad experience,” said a community manager in Florida. “Homeowner Associations are businesses. The business doesn’t stop incurring expenses, having to pay for upkeep and maintenance, paying for electricity, security and trash collection just because a virus is killing thousands. The fact that people who own homes in a community are asking for discounts or refunds shows just how disconnected some in the area truly are.” The Puerto Rico Department of Consumer Affairs issued a new set of rules to protect condominium residents from “extreme measures” adopted by condominium boards. In several cases, these boards prohibited access to common areas such as the laundry area, even going so far as to completely prevent nonresidents from entering the condominiums. One HOA banned the entrance to delivery men as well as to people who rented units from owners. When challenged, the board stated quite officially that “our Governor has declared a state of emergency throughout the State of Florida, Section 718.1265, Florida Statutes can be exercised by the board. This statute governs a condominium association’s emergency powers during an event for which a state of emergency is declared. Among other emergency powers authorized under the statute . . . the board, determine any portion of the condominium property unavailable for entry or occupancy by unit owners, family members, tenants, guests, agents, or invitees to protect the health, safety, or welfare of such persons.” In Spokane, Washington, a nurse wanted to self-isolate in a trailer so she parked in her family driveway to protect her children while being able to see them through the glass. She acknowledged that she knew such parking for more than forty-eight hours violated her HOA regulations, “however she thought if there was ever a time for an immediate exception, this would be it. But she says the HOA told her doing this could result in a daily fine.” The Naperville Post Office informed the residents of Mill Crossing and Mill Orchard in Naperville, Illinois that they would have to retrieve their mail at the post office. No explanation was provided for the change in delivery. The requirement seems to have occurred after one person was infected with the virus. Residents complained that instead, the postal staff should have determined which building was affected, rather than depriving the entire condo complex and neighboring Mill Orchard. Moreover, tenants point out that the CDC has stated, “in general, because of poor survivability of these coronaviruses on surfaces, there is likely very low risk of spread from products or packaging that are shipped over a period of days or weeks at ambient temperatures.”

The balance between privacy and public safety turns out to be a sticky wicket. A conflict found in many HOA is highlighted by one in Kansas. The members of the Forest View HOA in Olathe, Kansas were notified that “In the unfortunate event that you or a member of your household tests positive for COVID-19,” the message said, “please report it to the HOA’s property manager”. The property manager would then alert every homeowner. “I was shocked that they were asking for that kind of information,” Jennifer Robinson told The Kansas City Star on Wednesday. “Why in the world would I want to share my family’s private health information with my HOA?” “It’s causing quite a furor,” said Steven Hall, of Olathe, who lives in another Olathe neighborhood. “It pretty much lit up on Facebook. People were like, ‘Dear God, what is happening?’ My first thought was maybe the city has granted the HOAs some kind of strange power.”

The Johnson County Department of Health and Environment was fielding complaints as well, said spokeswoman Barbara Mitchell. “There is no public health recommendation for this action,” the department said in an email. “JCDHE does not condone any private or public entity asking individuals for private health information, including results of COVID-19 testing.” A board member tried to explain: “I think if there were a case in the community, most people would like to be made aware so they took extra precautions at the community mailbox, on walking trails and sidewalks, etc.”

I joined this give and take when the same issue arose in my own HOA. Before I proceed, I should note that the board members and chairs of HOA are doing their work pro bono, often spending many hours sorting out conflicts among tenants and dealing with floods of complaints while only rarely receiving any kudos. I hence tread lightly when I wrote to my intrepid association head:

First much thanks for your continued effective leadership of our community; it is now needed more than ever and we are fortunate to have you at the helm. I am writing regarding your note that laws prevent you from notifying us if one of us gets the virus. I wrote two books on privacy and worked with the White House on drafting some of the laws. You are, of course, completely correct that you could not disclose the identity of such a person. However, if you are told that it is a violation of the law to inform us that someone has become ill, without disclosing any identity, I would like to know which law and which section of the law they are referring to. As far as ethics are concerned, disclosing would do no harm to the person and help much the rest of us.

I got a quick response: I am not a lawyer but my common sense said the same thing to me. Our legal counsel advised us not to disclose it. If and when management knows something like that, then I promise I will raise the question again with counsel. To me, the real need was to make sure everyone behaves with an assumption that some people may have already been infected and not be complacent because we have not been told by management that someone had been tested positive.

This required a response: Thank you very much for your constructive response. I am much looking forward to hearing what law the lawyers are talking about. As to how we should already behave, etc., is an idea studied in the gay community on the suggestion that there is no need to tell someone that one is HIV positive before being intimate on the ground that one should always behave as if . . . etc. It turns out that knowing explicitly adds much to safe behavior.

I received a call by a board member that the real issue is that the board fears that one of the “crazy” residents will sue our HOA if “God forbid” someone becomes ill and they feel their privacy has been violated.

I spent the last forty years extolling the virtues of communities. I cited Edmund Burke about the merits of the small brigades, referred to De Tocqueville’s writings about the great role volunteerism plays in what makes American society virtuous, and I pointed to the reams of psychological studies that show that we are social creatures and need communities for our well-being. However, having lived a year in a Kibbutz (the Israeli communal settlements), and studied at Berkeley when the hippies communed—I was not unaware of the darker side of communities. The coronavirus reminds us that communities need at all times to both attend to the well-being of their members but also not step on their rights, a delicate and complex balance.