The Coronavirus Pandemic Will Force a Paradigm Shift in the U.S. Intelligence Community 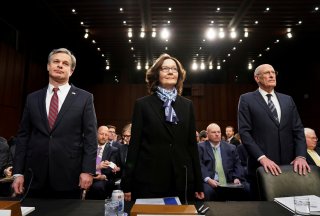 The U.S. intelligence community is a living organism. Our country’s best and brightest make up the collective hive-mind. It relies on information from a vast network of sources, experts, and data collected and processed by the most advanced technology the world has ever seen. When failures occur, they are almost exclusively a failure of analysis and not a failure of collection.

Just like individual humans, the intelligence community, as a whole, is susceptible to the same psychological barriers to rational, dispassionate, and objective analysis that all people experience in their day-to-day life. When undergoing formal analysis training, there is much time spent on how to recognize cognitive bias, the impact human perception has on analysis, and what countermeasures are useful to mitigate these vulnerabilities. CIA legend Richards Heuer made studying the psychology of intelligence analysis his life’s work and noted the wiring of the brain conditions it to see what it expects to see. The world must be as it seems. Nevertheless, every so often, a catastrophic event catches the intelligence community by surprise and forces a paradigm shift. We are now at one of those crossroads, and sadly the second such for this generation. As Heuer put it so well: “When faced with a major paradigm shift, analysts who know the most about a subject have the most to unlearn.”

It is hard to rapidly change the course of the massive seventeen-member frigate that is the intelligence community, replete with its thousands of captains. One thing that forces almost immediate change is an intelligence failure, of which I consider there to be two types. The first, which

happens daily, is a simple wrong estimation. You assessed the enemy was going to zig and they zagged. This is quite frankly the nature of intelligence; the goal is to divine likely scenarios in reasonable timelines under predictable circumstances. These types of failures are expected and largely planned for. The critical aspect of these commonplace failures is that the right target was being watched. Yes, we failed to estimate that the Soviets would deploy nuclear weapons to Cuba in the 1960s, but at least we were focused on Soviet nuclear proliferation. We also failed to estimate the USSR would collapse, but at least we were focused on the Soviet economy. Right target; wrong analysis.

These are commonly known as Black Swan Events, named for the surprise Dutch explorers exhibited when they discovered the existence of black swans in Australia in the late seventeenth century—something they thought impossible.

It is certainly hard to imagine given the geopolitics of the current era but prior to World War II the United States did not have a permanent intelligence apparatus. Capabilities and organizations would coalesce to answer acute crises, and then go dormant. This was largely due to cultural issues, as an enduring intelligence capability seemed antithetical to the civil liberties and personal freedoms the country was founded on. Pure geography played a role as well—you couldn't ask for a more tactical topological advantage than the continental United States is surrounded by massive oceans and friendly docile neighbors. Pearl Harbor changed all that. It was inconceivable to military strategists that Japan would attack. The United States had innumerably more resources, why would Japan take such a gamble? The United States would never be so reckless. This belief was held so firmly that intercepted Japanese naval communications were not even prioritized for decryption and analysis. This was a failure of mirror imaging—assuming the enemy thinks the way that Americans think. The defeat of Japan exposed they were victims to the identical bias as they assumed the attack would be so demoralizing that the United States would immediately capitulate. Forever etched in my brain is an ethos indoctrinated during my time at the U.S. Army Intelligence School: “think like the enemy.”

The terror attacks of September 11, 2001, were another event where carnage spurred change. Decades of Cold War against the USSR molded an intelligence community that was organized completely centric to best provide an advantage in the outset of conventional war

among world superpowers. While the alarm bells of radical Islam began ringing throughout the 1990s, the efficacy of disorganized and ill-equipped militia were not taken seriously, save by an extremely vocal minority. Cultural and political sensitivities within the IC afforded the enemy additional advantages. Some analysts thought it could possibly happen, but not many thought it would actually happen. The 9/11 attacks confronted an intelligence community completely unprepared to wage asymmetric war in both the tactical and espionage sense. When I landed in Mosul at nineteen years old as a Counter-IED Analyst, all I had to fall back on from the schoolhouse was a tremendous knowledge of the tactics North Korean T-72 Tank units would employ while advancing south along the Chorwon Valley.

The coronavirus pandemic will change the U.S. intelligence community far more drastically than the previous two examples from history. The United States and most western nations consider different factors when defining an adversary. I spend most of my time as a consultant assisting clients in defining their adversaries. Without a clear determination of adversaries and their capabilities it is impossible to implement effective countermeasures. All mitigation efforts start here. Developed nations tend to want to assess the capabilities of foreign (or sometimes domestic) actors that can negatively impact the economy or public health. Also important is a nation's ability to project the leverage necessary to enforce its policy objectives. Equally as important is the ability to maintain a reputation of a reliable and capable ally. This is why almost fifty countries comprised the 2003 Iraq Invasion’s “Coalition of the Willing”—not because they wanted to, but because they had to due to goodwill from the economic or tactical advantages the United States affords them. I am reminded of the quote played off the original from Prussian diplomat Klemens von Metternich: “When America sneezes, the whole world catches a cold.”

This pandemic fits all categories of adversary criteria. The economic impact has been massive, all but erasing the economic growth of the recent period and propelling unemployment rates to historic heights. Sen. Chuck Grassley (R-Iowa) expects the total economic toll to eclipse that of 9/11. The public health impact has been equally as shocking—literally eclipsing the death toll of 9/11, and overwhelming the US hospital system in physical space, expertise, logistics, supply, and management. With a distracted homefront, the enemies of the United States are already taking military and economic liberties betting on our reduced readiness. The impact the virus had on U.S. Naval readiness left the Chinese so emboldened they sunk a Vietnamese fishing vessel in contested waters. This was a clear message to Vietnam that now may not be the best time to be seen as cozying up to the United States, as is the recent perception.

This is going to be such a drastic paradigm shift because for the first time in earnest the intelligence community has to assess an enemy that isn’t human, regardless of if the pathogens are being consciously created in the furtherance of biological warfare. A virus has no psychological vulnerabilities to exploit. A disease isn’t subject to the uprising of a population we can influence. Infections don’t have phones to intercept or track and offices to bug. There are no compounds to photograph via satellite, there are no financial transactions to track, and there is no housekeeper to flip as a spy. How do you think like an enemy that doesn’t think?

We can expect an exponential expansion of the National Center for Medical Intelligence, which is a component of the Defense Intelligence Agency that implements espionage tradecraft to collect intelligence on a wide range of health issues that can impact U.S. interests. A new priority employment profile for the intelligence community will emerge; doctors and scientists with backgrounds in epidemiology and the persistence of disease proliferation. Currently, many doctors employed by the intelligence community are used to assess the health of world leaders by analyzing photographs and videos of their appearances. We can also expect an increased focus on one of the most challenging intelligence collection efforts—covert and clandestine biological sampling. This is where biological material is collected and subsequently analyzed for signatures that warn of impending outbreaks.

The intelligence community already owes the American people a promise of perpetual vigilance against conventional nation-state actors and terrorists or other unaffiliated radicalized groups. Now a truly invisible, nonhuman enemy has shocked the nation with its might. The strength of America is that of her resilience. The Intelligence Community has time and again proven an impressive malleability that perseveres through painful circumstances. This time will be no different. Unlike all the foes of the past, coronavirus does not have the ability to think, but if it could, it would soon regret infecting this sleeping giant.