Corruption Is China's Friend in Its Quest to Dominate Africa 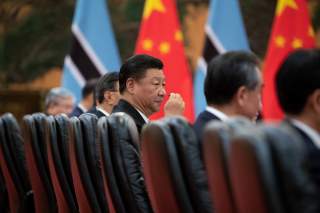 China’s economic expansion into Africa has benefited Beijing tremendously by allowing access to natural resources. Yet it forced the continent’s national governments to borrow heavily for infrastructure projects. Moreover, with China’s expansion came unmitigated corruption that no one bothers to hide anymore.

Why should America care? Because China’s strategy in Africa is the reflection of its strategy, in which, like in a giant game of Go, Beijing captures territory and imposes its modus operandi on lands from Algeria to Zimbabwe.

When significant investors leave a former poster child of good governance—such as Botswana—the U.S. government and American businesses should care. In recent years, when western companies leave, the Chinese march in. To paraphrase President Ronald Reagan, China wins, we lose.

Botswana is exhibit A: President Ian Khama, whose father Seretse led the way to transparency and the rule of law, just spent half his nation’s annual budget on second-hand Swedish made fighter jets. The Gripen fighters have no tactical or strategic use by Botswana.

Other countries which bought the Gripens also ended up numerous corruption scandals. These include South Africa, Brazil, Czech Republic, Hungary, and India.

Botswana can’t even maintain or fly Gripens. So why did they buy it? The contrails of corruption that the Gripen appears to have left around the world speaks of itself.

The Botswana case demonstrates how great and prosperous nations can be built up from poverty in one generation and then destroyed by a single administration in the next. In Botswana, both assessments have been proven by the same family and political party.

Serving as the country’s president starting with its independence from Britain in 1966 until 1980, royal chieftain Seretse Khama built a prosperous and successful nation. His Botswana Democratic Party (BDP) has always ruled the country.

Unfortunately, Khama the Elder's success is now only a legacy, primarily disassembled by his son, and the BDP. Ian Khama served as president from 2008 until February of this year, when he voluntarily stepped down under a cloud of corruption allegations.

A country’s value is not just in its Gross Domestic Product (GDP) and its financial reserves, but also in its integrity which directly impacts foreign investments. Under the leadership of President Ian Khama, all three value indicators disintegrated.

Following the collapse of commodity prices, Nornickel attempted to exit the country. The Botswana government, through its investment agencies, agreed in 2014 to buy all assets for more than $300 million; and, in 2015, renegotiated down to around $277 million. To date, nothing has been paid. It’s also a good question, then, what did the Government of Botswana do with a $250,000,000 bond it floated to purchase the assets from Nornickel.

The Botswanan judicial system is now blocking Nornickel from resolving the matter through international arbitration. The president appoints judges with no parliamentary review or input. The government, ordering the liquidation of all assets, was seeking a pennies-on-the-dollar $45 million settlement with the metals giant, but again nothing has been paid to Nornickel.

Like a savannah fire, corruption spreads and destroys whatever it contacts. That fire resulted in members of the BDP being caught in a series of financial scandals, including President’s brother spending $7 million government dollars on a luxury aircraft. When the “Panama Papers” investment scandal erupted, one hundred members and agencies of the government were identified as operating off-shore tax havens.

Other foreign investors have already responded to Botswana’s government and economic problems. Once the powerhouse of the diamond industry, Botswana has also lost that market. In 2010, British Petroleum left the country. In 2017, Anglo-American pulled up stakes in coal mining and export.

National economic turmoil has resulted in a 19 percent unemployment rate—40 percent among youth—and a fifth of the country’s two million people surviving on an average of $2 a day.

The corruption within the government of Botswana needs to be brought under control. The question is can current President Mokgweetsi Masisi accomplish this goal? Unfortunately, Botswana’s Directorate on Corruption and Economic Crime has proven itself focused on protecting the BDP and corrupt politicians from justice.

Neither the people of Botswana or the West have time for the Umbrella for Democratic Change opposition party unseat the BDP in 2019 and develop its own reforms. Elections, especially in corrupt one-party states, have little surprises, as Zimbabwe recently demonstrated.

The ultimate solution would be for Western investors to return to Botswana. But that will not happen until the government fulfills previous financial agreements, and proves it can once again be trusted.

Western governments and International Financial Institutions need to become involved and help Botswana dig itself out of its financial crisis and credibility deficit—or yield yet another the country to China.

Colonel (Retired) Wes Martin, U.S. Army Military Police has served in law enforcement positions around the world and holds an MBA in International Politics and Business.

Image: China's President Xi Jinping (C) attends the bilateral meeting with President of Botswana Mokgweetsi Masisi (not pictured) at the Great Hall of the People in Beijing, China, 31 August 2018. Roman Pilipey/Pool via Reuters