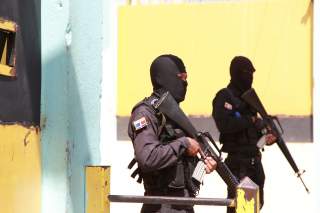 The recent deaths of American tourists and shooting of former Boston Red Sox superstar David Ortiz have shed a light on the Dominican Republic’s lack of security, its poor public-health regulations, its failed criminal justice system, and its high levels of corruption and impunity.

The Dominican criminal justice system’s credibility has declined steadily since the ruling Dominican Liberation Party (Partido de la Liberación Dominicana, PLD) rose to power in 2004. As a result, crime has skyrocketed to levels the likes of which the country has never seen before. In addition, the institutions and law enforcement agencies tasked with protecting the public health and providing security of human drugs, biological products, medications, consumer goods and food supply are virtually operating unchecked.

Few countries have as corrupt a criminal justice system as the Dominican Republic. The scarce but well-intended efforts that law-enforcement officials have made to arrest criminals and raid clandestine laboratories and drug spots are often hampered by the Dominican Republic's weak criminal justice system, which, in many cases, fails to prosecute and imprison perpetrators due to their influence within or association to the PLD.

Most of the Dominican criminal justice system’s senior civil servants are political appointees who demonstrate an ironclad loyalty to the PLD and to Dominican President Danilo Medina. Judges aligned with the PLD generally deliver benevolent rulings to government officials and their associates, regardless of the crime. The greater the influence a criminal has within the PLD, the slimmer the probabilities are for achieving true justice and accountability against that criminal.

Recently, professor Yuniol Ramírez was assassinated by contract killers who were believed to be closely linked to Dominican high-ranking government officials. Journalist Blas Olivo was tortured and executed by contract killers. The masterminds behind these crimes are yet to be held accountable.

Further, the Odebrecht corruption scheme, one the largest, most wide-reaching corruption cases perpetrated by a construction company in the history of the world, has been deliberately mishandled by Dominican judicial and political authorities. Brazilian prosecutors provided Dominican Chief Prosecutor Jean Alain Rodríguez with key evidence linking numerous high-ranking Dominican government officials to a $92 million bribe paid to them by Odebrecht senior executives in exchange for illicit construction contracts. Nonetheless, Rodríguez, an airtight member of the PLD and a friend of President Medina, neglected the judicial assistance of Brazilian prosecutors and made a questionable deal with Odebrecht to protect his fellow PLD members from going to prison. No Dominican government official is currently in prison for this global-scale corruption case.

Punta Catalina, a power plant that is said to be overvalued by least $1 billion, is the largest illicit contract obtained by Odebrecht in exchange for bribes in the Dominican Republic. This corrupt ruse has allowed some members of the Chamber of Deputies and some senators to rake in bribes worth about $300,000 and $1 million per capita. Those bribes paid for their support of President Medina's 2015 constitutional reform, which enabled him to run for re-election in 2016.

Based on the stratospheric levels of impunity and corruption, and the poor performance of the Dominican criminal justice system and law enforcement, only independent inquiries led by trustworthy, foreign organizations like the Federal Bureau of Investigation are capable of producing credible findings on the deaths of the American tourists; otherwise, these cases are very likely to remain obscure and unresolved.

Ramon Collado is a political analyst and New York University alumnus. He writes about political corruption, geopolitical issues and transnational crime. He has been published by Forbes, The Miami Herald, The Hill, Newsmax, The Jerusalem Post, The Epoch Times, El Día, amongst others.