The Cost of a Clean Brexit 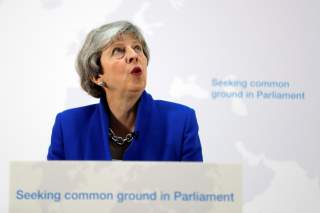 Two new complications will now likely distract commentary on the Brexit saga. One, Prime Minister Theresa May has resigned her office pending the Conservative Party’s decision on a new leader later this summer. Two, European Union parliamentary elections have created a more polarized political environment within the union. As tempting as it is to see in these events changing the face of Brexit, it would be a mistake to exaggerate their significance. The fundamental disputes that have thwarted agreement to date remain unchanged, while economic imperatives continue to impel all—on both sides of the Channel—to overcome frustration and seek some kind of post–exit relationship. The first of these fundamental considerations will ensure rough going on an agreement. The second one promises that a deal will eventually emerge, even if seemingly intractable differences will demand as much muddle as clear lines.

Such a combination of fundamental differences and imperatives may bring to mind a distant historical parallel: the sixteenth century exit of the English church from the Church of Rome. That England, too, was deeply divided, and could find little room for compromise. Just like the strains of today, that separation required fixes to a bewildering array of established associations, contracts, loyalties, legal obligations, and customs. The archbishop of Canterbury, for instance, had in his oath of office that he was, among other things, the Pope’s legate. Removing those few words required a ruling within the Church of England and vote in Parliament. Every step met resistance from one faction or another. Compromise was all but impossible. The sides distrusted each other completely. The Catholic side saw the action as an affront to God. The Protestant side saw the opposition as agents of foreign powers. It took about three hundred years, until the early nineteenth century, to resolve the matter. That’s when Catholic emancipation ended suspicion of a large segment of the population.

Three hundred years is a long time, and it would be a mistake to overwork the parallels. But today’s disputes carry similar, and possibly more secular, differences in what people consider important—differences that render agreement and compromise extremely difficult, if not nearly impossible. These divisions were clearly evident during the 2016 Brexit referendum. People mostly talked past each other and they continue to do so today.

The Remain side spoke some about internationalism, but mostly it focused on economics and so its legacy group continues to make that approach. It warned of the costs to Britain of separation. George Osborne, Chancellor of the Exchequer during the campaign, estimated that exit would require £15 billion more in taxes and £15 billion in cuts to government spending. Lord Darling, his predecessor as chancellor when Labour ran the government, spoke of a freeze in spending on the National Health Service. A ninety-page government pamphlet, distributed to every household in the UK just before the vote, predicted that the British economy would shrink 0.5 percent a year for four years after exit, joblessness would rise 1.6 percentage points, sterling would lose 16 percent of its foreign-exchange value, inflation would rise from 0.5 percent a year to almost 3.0 percent, and housing prices would fall some 18 percent. A lot of the loss would emerge, it said, from the weakened position of British finance and the attendant loss of many high-paying jobs.

The exit side almost entirely ignored economics. It concerned itself with British sovereignty and self-government. The EU, it claimed, not only imposed on Parliament’s historic prerogatives but itself suffered from a “democracy deficit” because appointed bureaucrats had more power there than an elected body. When confronted with the Remain side’s economic concerns, the Brexiteers either dismissed them as exaggerated or inverted them, claiming that British sovereignty was worth even greater costs if it were to come to that. Elements among the Brexiteers drew on historical precedent, arguing that the economy, once freed from EU constraints, could make attractive trade deals across the globe and possibly become the “Singapore of the north.” But mostly they sidelined the economic arguments of their opposition.

Prime Minister May’s “deals” all failed in Parliament because they could not bridge the divide. Indeed, her deals hardly built a bridge to anything. Mostly they centered around agreements to postpone deadlines and keep talking, which made no one happy. The Brexiteers saw in them a further concession of sovereignty, while the legacy Remain camp, which continued to focus on economics, saw May’s deals as the worst of all possible worlds. By prolonging the business uncertainties surrounding Brexit, they thwarted planning efforts. Even a break without an agreement, what the journalists refer to as a “hard Brexit,” held greater appeal than the options that May presented. If such a harsh break would have denied business and finance the advantages they once enjoyed on the continent, then it would at least have given decisionmakers something concrete around which to formulate alternative strategies. Worst was May’s last effort, what she and her counterparts in the EU called a “political declaration.” It offered nothing concrete but simply pledged to accept whatever solution was worked out over time by a group of technocrats. When Parliament rejected the declaration, members aptly described it as a “blindfold exit.”

Nor did her last desperate measures before resigning offer necessary bridge building. Her offer of a new referendum, though the idea had gained popularity among legacy Remainers, could hardly satisfy. It smacked of the much-criticized continental practice of offering the public referendum after referendum until it voted the way the elite wants. Even some die-hard Remain supporters balked at this. Besides, it is far from clear how the nation would have voted. She also tried to gain a majority vote in Parliament by approaching Jeremy Corbyn, head of the opposition Labour Party. Negotiations across the aisle, as Americans say, are rare in Britain, and had little promise anyway. Corbyn faces a mix of interests within his party and had little incentive to help May out of her bind. Her resignation changes none of those facts.

May looks especially inept and even a greater political/diplomatic talent could have built the necessary bridges during the last couple of fevered years. In fact, the only matter that has moved ahead quickly is agreement on a $50 billion “divorce bill” to Britain. The legacy Remainers could see it as a reasonable price, while the Brexiteers could view it as small price to pay for sovereignty. Beyond this, three main issues continue to hang between these two very different sets of priorities: 1) future rules governing trade, 2) the future of British finance, and 3) the fate of the border between the Irish Republic and the British province of Northern Ireland.

On trade, all sides have good reason to seek a deal of some sort. The economic ties are simply too compelling to make a so-called “hard Brexit” palatable, except perhaps for a few historically romantic Brexiteers. Almost 55 percent of UK imports come from the EU and 44 percent of the country’s exports go to what today constitutes the rest of the EU. Some 14 percent more of Britain’s exports occur under the auspices of EU treaties; in fact, several economic powers, Japan most notably, have constructed facilities in Britain with an eye to sales throughout the EU. The absence of a trade deal would jeopardize these major employers and major contributors to Britain’s gross domestic product. The EU faces similarly compelling realities. Britain is the second largest economy in the present union. It absorbs 20 percent of the exports of the rest of the EU and almost 10 percent of Germany’s exports. Thus, a deal would seem a common imperative, certainly for the EU and for the economically focused legacy Remainers. Even the sovereignty-obsessed Brexiteers have no objection to the prosperity that would spring from a good deal. But not any deal will do.

The legacy Remainers, especially those with internationalist inclinations, are in favor of what trade economists call a common market. It would allow the duty-free movement of goods and services, investment, and labor. It would insist on common standards for goods, regulation, and labor. This is close to the arrangements that Norway (which  is not an EU member) now has with the union. It would effectively reproduce the pre-existing environment when the UK was a willing member of the EU. Indeed, Norway even pays dues to the union. The EU would, of course, prefer this arrangement, too. It would retain all the control in Brussels despite an official British departure. For those in Britain who focus on sovereignty, however, this would be the worst of all options. London would remain subordinate and lose influence within EU circles.

Compromise could, however, form around a customs union. Such an arrangement would allow tariff-free trade between the UK and the EU, placing Britain and Northern Ireland behind a common tariff wall with the rest of the EU. It is in large part the arrangements Turkey has with the EU. It would answer for most of the purely economic concerns. A customs union could also satisfy the sovereignty-seekers in Britain because it would allow London to escape EU jurisdiction on product and labor rules and allow British restrictions on immigration from the continent. It would, of course, thwart that small group in Britain that would like the country to go off on its own to settle trade deals with the rest of the world and possibly become a new Singapore. Apart from such dreams, it would seem to answer most economic concerns on both sides of the Channel. A customs union with a bit of fudging might even answer important questions on British finance.