The Costs of Foreign Volunteers Fighting in Ukraine 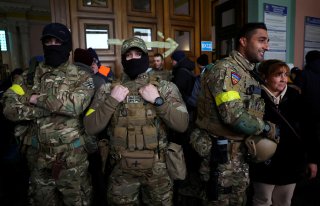 While much attention is being paid to Russia’s invasion of Ukraine, less analysis has focused on how foreign volunteers are flocking to join the conflict. Ukraine’s appeal to foreign fighters is not unusual; such invitations from sovereign states have occurred many times throughout history, and volunteers routinely have fought and risked their lives for countries other than their own.

To many not involved in the actual war and armed conflict, foreign calls to arms often conjure up images of idealism and valor. One of the most famous English essayists of the twentieth century, Arthur Eric Blair, also known as George Orwell, fought in the Spanish Civil War of the 1930s. It is estimated that some 35,000 idealists and free-spirited volunteers from eighty countries traveled to Spain to fight an uprising against the country’s democratic government in July 1936 led by future dictator General Francisco Franco.

The ongoing Russian invasion of Ukraine has brought to the fore a similar initiative. Ever since Ukrainian president Volodymyr Zelenskyy introduced the idea of an “International Legion” to defend Ukraine, there has been a surge of interest in the project around the world.

While we are not sure how many of these “idealist mercenaries” are part of the Ukrainian army, it is now well established that Ukraine is actively recruiting many non-Ukrainians in its offensive against Russia. According to Ukrainian foreign minister Dmytro Kuleba, as of early March, some 20,000 volunteers from fifty-two countries had signed up to the project.

On Command and Obedience

There are several issues to consider with regard to the nature, character, and legality of foreign volunteers in the Ukrainian resistance against Russia.

First, if the volunteers are approved to fight under the Ukrainian flag, who will command them? If the commanding officer is Ukrainian, would they remain totally obedient to his or her command? What if the volunteers disagree on a specific order and refuse to obey?

What authority does the Commanding Officer (CO) have over those volunteers if they contradict his or her orders? Similarly, what military or legal recourse can the Ukrainian military establishment take against those who contravene their CO? Can they be court-martialed for disobeying an order? What if the volunteer decides to abandon their post? Can the CO order that volunteer soldier’s execution as part of the ongoing war effort without fear of legal reprisal?

Second, who's to say these volunteers are not infiltrators? As Orwell identified some eighty years ago, wars involving foreign volunteers are fertile ground for vicious treachery amongst supposed allies. As it is, the current Ukrainian military establishment is grappling with the issue of Russian sympathizers and double-agents among its rank and file. Take for instance, the alleged Ukrainian execution of Denis Kireev, one of its key peace negotiators with Russia, on February 28, 2022. If this is the current state of affairs, how can the Ukrainian military establishment trust volunteers?

Third, what is the guarantee that the volunteers will not fight their own private wars in this military engagement? For instance, in the Spanish Civil War, volunteers on the Republican side were from all ideological persuasions: from anarchists and communists to die-hard murderers. Similarly, the Islamic State’s (ISIS) war in the Middle East drew a fair number of homicidal maniacs hoping to enact their gory, violent desires. Couldn’t the war on the Ukrainian front also draw (theoretically, at least) hordes of volunteers with similar leanings and disposition?

Fourth, even if we consider that the volunteers are completely loyal to the Ukrainian cause, how should the world respond if they are found to be killing Russian civilians and surrendering enemy soldiers in cold blood? Can those conscience-keepers of the international community, who have egged on foreign volunteers to join this war, bring the perpetrators of such violence to justice? Can we cry in equal chorus that the actions of these volunteers constituted war crimes? Or, do we brush such acts aside as the volunteers were fighting on the “right side” of history?

Fifth, external volunteers are often “thrill seekers.” Hence, even if there is a thaw in the war or the government under whose flag they are fighting decides to enter a ceasefire with the adversary or sign a peace accord, they may continue their assault. Given the volatility of the Russo-Ukrainian war narrative, in the event of any possible rapprochement between the two, it may be severely undermined by the foreign volunteers on the ground. Thus, while these ideological mercenaries may gain some tactical victories on the battlefront, they can potentially ruin the chances of a nascent peace plan.

In the Russians’ Hands

Examining the role of foreign volunteers on the Ukrainian side amounts to telling only part of the story. A proper discussion of this topic should include the assessment from the side of the adversary. From across the fence, these are three possible scenarios that one could envision regarding volunteers.

First, in the event of foreign volunteers taken hostage by the Russian side, whose obligation is it to seek their repatriation and rescue? Should it be Ukraine’s duty? Or is it the responsibility of the state to which the national belonged that should approach the belligerent?

Second, can the third-party governments to this conflict complain about war crimes in the event of Russian maltreatment against their citizens?

Third, what legal recourse will be available to the families of those foreign nationals killed by the Russian side? Would the government of the deceased take up the issue with its Russian counterpart? Would it be alright if Ukraine just commits these bodies to a post-conflict war memorial?

At the end of the day, while the volunteers are happy to play hero against one villainous regime, that villainous establishment has the dispensation to treat them according to its own dispensation. Such a prospect becomes even more real when the regime in question is Vladimir Putin’s.

Objectively assessing the involvement of foreign fighters in recent wars leads us to one conclusion: Except appealing to our sympathies, foreign volunteers fighting in another people’s war rarely play the role of the catalyst. Scores of Western volunteers fighting against the infamous Islamic State between (2013-2018) in Iraq and Syria only undermined the region’s very fragile ethnopolitical composition.

The participation of a similar cohort of idealist warriors in the Republican side of the Spanish Civil War was a doomed resistance, beset by infighting among volunteers. Similarly, the current fascination with an “international brigade” for Ukraine is unlikely to fare any better.

Moreover, there are some serious questions to consider about the likely fall out of this international brigade in the long run. Invitation to foreigners to fight on the Ukrainian side is not a new initiative. For well over a decade now, the controversial Azov Battalion or its new nom de plume, the Azov Special Operations Detachment, has recruited foreign volunteers. The battalion is known to openly profess white supremacist and neo-Nazi ideology. Given this provenance, transnational support for Azov has been wide, and Ukraine has emerged as a hub for neo-Nazi, white supremacist, and far-right groups across the international system. Under the circumstances, Ukraine’s new foreign volunteer recruitment drive may be a god-sent opportunity to many such like-minded people from all over Europe and the Americas to flock to Ukraine, much like the Islamic State volunteers intent on wreaking havoc in the Middle East in the not-so-distant past. Should that happen—we may be staring into another abyss.

Amalendu Misra is Professor of International Politics at Lancaster University, United Kingdom, specializing on theories of violence. Follow him on Twitter @MisraAmalendu.