Could America Convince China and Russia to Keep North Korea in Check? 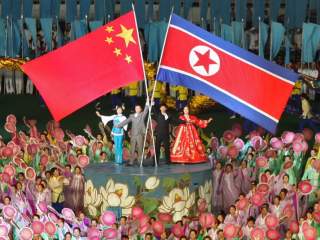 Pundits around the whole Asia-Pacific have been scribbling furiously about the supposed import of a brief and largely ceremonial phone call. That might make a nice break from the tedium of talking about rocks and reefs, but more sober analysts will retain their focus on genuine strategic problems that gravely threaten U.S. national interests and international security more generally. As Pyongyang races ahead with its nuclear-weapons program, Seoul is being torn apart by a scandal of massive scope. When combined with U.S.-China tensions that were growing apace even before Trump’s election, the potential for catastrophic (nuclear) war in Northeast Asia is dangerously close at hand.

Helping to nudge this combustible brew toward some semblance of stability is the first grave challenge that the Trump administration faces. And even as the cabinet is filled with Middle East experts, this threat to U.S. interests far outpaces that of ISIS, Syria, or even Iran. Never mind that the “Iran model” for dealing with North Korea may be a moot point, since the Obama administration’s nuclear accord with Tehran could well be abrogated by the new administration. You can bet that Pyongyang will be watching that closely. It has been argued in this venue, and with some justification, that Washington actually has no major interests at stake on the peninsula and that the United States can safely let others cope with the “fallout,” so to speak. That drastic solution is not advocated here. Rather, Washington has a definite role to play in defusing the current crisis and energetically moving to denuclearize the peninsula. But this can only be done if the United States is willing to actively cooperate with China in the process. To move forward in this way, Washington must fully understand evolving perceptions regarding the Korean situation in Beijing.

Unfortunately, Chinese analyses with respect to the peninsula are becoming ever darker. Tsinghua University professor Liu Jiangyong (刘江永) writes in the lead article of a recent edition of the journal Northeast Asia Forum (东北亚论坛) that the peninsula is trapped in a vicious cycle of increasing tensions (恶性循环的怪圈), and that Pyongyang’s current approach is disturbingly to “prepare to fight a nuclear war [准核战争].” Like most Chinese analysts, Liu is skeptical that sanctions will succeed in disarming North Korea, arguing that Washington’s softening on Cuba policy in the last few years demonstrates a recognition with respect to the limits of what sanctions can achieve. He is particularly concerned that current U.S.-ROK military plans seem to be inclining toward “preemptive [先发制人]” attack with a troubling emphasis on “decapitation [斩首].” Under such circumstances, Pyongyang “must be ready to launch its nuclear warheads at any moment,” according to this Chinese assessment. Thus, each time that there is an ROK-U.S. large-scale military exercise, Pyongyang is “extremely anxious [十分担心],” lest the exercise evolves into a preemptive attack. There is a perceptible sympathy for Pyongyang in this piece, for example, when Liu notes that China was in a similar situation during the 1960s of confronting grave threats and seeing an imperative to break the superpower nuclear monopoly.

Liu points out the irony in the situation over the last few years, in which Washington has urged Moscow and Beijing to go along with sanctioning Pyongyang, even as it has simultaneously applied sanctions against Russia over the Ukraine crisis and built up its military forces against China in the South China Sea. Indeed, Liu laments that when China has gone along with the United States in the UN Security Council, there have been no corresponding positive gestures from the American side on either the South China Sea or the East China Sea, as Washington simply “persisted in its old ways [我行我素].” Yet again drawing on the volatile South China Sea situation, Liu suggests that Washington is using the same “wedge strategy” it has employed in Southeast Asia to try to “disintegrate China’s ties with North Korea [瓦解中朝关系].” However, Liu also points out the problem that even as the relationship between Beijing and Pyongyang has indeed become more fraught (越来越不正常), so this has made North Korea feel more insecure, which in turn has caused it to accelerate its nuclear program. This author also makes note of gathering forces in Japan that support a nuclear program and he decries the imminent deployment of U.S. missile defenses (namely THAAD) into South Korea as well. In the end, Liu recommends that more focus be accorded to developing security ties between China and North Korea. Many American readers may actually agree with his conclusion that the whole problem can really only be resolved through a U.S.–North Korea diplomatic breakthrough. In that much needed process, Liu pledges that China would play an “active and constructive role.”

But lest anyone comes away optimistic, an even darker appraisal was the lead article in a recent edition of Contemporary International Relations (现代国际关系), published by an important Beijing think tank focusing on foreign policy. That piece, written by Lin Limin and Zheng Yu, concludes that the United States and its allies have given up on denuclearization and are now pursuing the dangerous course of outright “regime change [政权更迭].” These authors derisively describe how “North Korea collapse theory [朝鲜崩溃论]” is so pervasive in American thinking about the peninsula that this concept has inhibited any and all attempts at compromise. For example, they charge that “the Clinton administration sincerely believed in the ‘North Korea collapse theory,’ such that they failed to make good on their promises” with respect to the so-called Agreed Framework. Attempts at compromise during the second term of the Bush administration are said to have failed for the same reason. Noting North Korea’s surprisingly good economic and trade figures from 2014–15, not to mention Pyongyang’s growing stockpile of nuclear weapons, Lin and Zheng contend that the “North Korea collapse theory” is chimerical. Moreover, they additionally grant that “North Korea’s nuclear arsenal . . . has caused South Korea’s promotion of ‘gobbling up unification’ plans against North Korea to be shattered [朝核能力… 使韩对朝搞‘吞并式统一’的计划走向破灭].”

Not surprisingly, these authors evince little enthusiasm for sanctions against North Korea. Noting that without Russian and Chinese opposition, sanctions against North Korea would be much more severe, they cite Chinese foreign minister Wang Yi’s statement that sanctions were not the goal. They observe that Washington intends to seek inspection regimes at all relevant ports and airports with links to North Korea. According to these analysts, such a policy begins to “approach that of a blockade.” Written before the U.S. elections, the authors predict that whichever candidate won the White House, he or she would “apply pressure tactics against China to deal with the North Korea crisis [对华施压方式应对朝核危机].” These means of applying pressure were anticipated to include attempting to sever China–North Korea trade ties; increasing forward deployed forces in the Asia-Pacific; reinforcing the trilateral alliance among Japan, the United States and the ROK; deploying the THAAD anti-missile system; and promoting dual deployments of U.S. aircraft carriers into the Western Pacific.

However, excessive pressure on North Korea could prompt even more irrational and aggressive actions from Pyongyang, according to these Chinese analysts. Moreover, a collapse scenario would not only likely bring about a flood of refugees into China, but could also result in “U.S. military power pressed right up to the China–North Korea border.” One goal of this U.S. pressure on China, write Lin and Zheng, is to bring about a hostile relationship between Pyongyang and Beijing. But under no circumstances will China permit a situation in which China is viewed as an enemy of North Korea, according to the authors. At the conclusion of the essay, these authors conclude that tensions between the great powers with respect to the Korean Peninsula are intensifying. They note that if the U.S.–Japan–South Korea alliance morphs into an anti-China/Russia bloc, then “China and Russia will also strengthen countermeasures [中俄也会加强反措施].”

By seeking to “Make America Great Again,” the new administration may indeed have in mind the golden 1950s, when American power was at its zenith. Unfortunately, trends on the Korean Peninsula may point to a return to those early Cold War days. Yet readers familiar with the history of the Korean War will know well that, for the soldiers in the trenches, those were not golden days at all, but rather the conflict formed a wretched and horribly destructive cauldron of violence that was filled to overflowing with the blood of Koreans, Chinese and many Americans too.

A gathering of the “blob” recently got together to chew over the situation on the peninsula. The recommendations included the anodyne suggestions that the United States should seek to protect human rights, enforce sanctions and strengthen defense. Given those boilerplate proposals, which seem to suggest doubling down on policies that are not currently working very well, one must support the recent call in this venue to challenge the “blob” on North Korea policy, in particular. However, the elegant solution to this most important of all quandaries is not to abrogate the U.S.-ROK alliance. That would be highly destabilizing, especially now. Rather, the right choice is to double down on cooperation with China with respect to North Korea. Setting titillating phone calls aside, to concentrate on the difficult diplomacy required to tackle real international-security problems, will be a good start on that process. Moreover, that approach will necessarily have to involve many more carrots than sticks. And these carrots will need to go well beyond sending NBA players and symphony orchestras.