Could This Be China's Panama Canal? 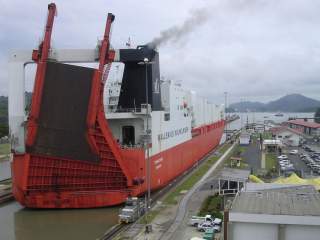 President Obama’s trip to Vietnam was ostensibly focused on the importance of the Trans-Pacific Partnership (TPP) in the Asia-Pacific region. However, it is quite certain that the visit had a powerful subtext: strengthening the partnership between Washington and Hanoi to offset Beijing’s aggressive approach to the South China Sea. The Chinese reef reclamation projects that resulted in shiny, new and large airstrips coupled apparently with deep water berths for ships have set the whole region on edge.

Two years ago, a crisis occurred between China and Vietnam that was reminiscent of the assassination of Archduke Franz Ferdinand in Sarajevo. The China-Vietnam crisis was comprised of hundreds of paramilitary vessels, a rising superpower’s untested leader, and plenty of nationalist bile on both sides. Both liberal internationalists and bellicose realists are looking forward in the coming months to resolution of the arbitration in the Hague brought by the Philippines against China, but it is far from clear that this legal ruling will calm the turbulent waters of the South China Sea. However, readers may also consider the possibility that all the above theatrics could well be a sideshow for the main act.

A spate of articles appeared in late 2015 in Chinese that discussed in reasonably detailed terms the opportunity to build the long anticipated canal across the Isthmus of Kra in Thailand. It seems widely held among Chinese sources that the project may “become an international golden waterway” [成为国际黄金水道]. If built, the new canal could have a major impact on both the commercial and strategic landscape of the entire region. At a minimum, the canal could move the locus of dynamic regional and global maritime trade hundreds of miles to the north, but it could also serve as a major enabler for China’s ambitious “one belt, one road” [一带一路] strategy as well. This edition of Dragon Eye will examine some Chinese perspectives on this possibility.

The Chinese military-affiliated press has been ever more bold in elaborating its relationship to the “one belt, one road” strategy—known recently among Western specialists by the clunky acronym OBOR. Indeed, the same magazine Naval and Merchant Ships [舰船知识], published by the giant Chinese military shipbuilding conglomerate CSSC, that featured an article on the Kra Canal project, also had splashed across the cover another banner headline: “Thailand-Chinese Military Cooperation in the Context of the ‘One Belt, One Road’”. Thus, even as Vietnam and Philippines have captured the imagination of American strategists over the last couple of years, China’s strategists’ gaze may have shifted to Thailand.

The aforementioned analysis is not shy about connecting the Kra Canal project and the so-called “Malacca Dilemma” [马六甲困局]. For 2014, it is observed that 59.5 percent of China’s oil was imported and that roughly 80 percent of that huge volume came through the Malacca Strait. India’s setup of military bases in the Andaman and Nicobar Islands are duly noted, but the authors emphasize that amidst the “growing risk of conflict resulting from the militarization and politicization of the South China Sea issue … [t]he biggest problem for the Malacca Strait remains the U.S. military.” But these naval analysts concede that the Kra Canal project “actually cannot prevent U.S. intervention … [and thus] cannot resolve the Malacca Dilemma,” because the real problem is that “… our country lacks the ability to project sufficient power into this region…” […我国在该区域缺乏足够的力量投送能力…]

The authors of this naval strategic assessment make an interesting argument in favor of the Kra Canal project. Drawing on the Cuban Missile Crisis of 1962, they explain that “in the nuclear age” [在核时代] that direct armed conflict is unlikely among the great powers, and Washington was forced to resort to the use of a cautious “quarantine” [海上隔离]. The expectation here seems to be that deterrence would likely hold between the large powers and that Washington would ultimately not dare to try to close China’s new gateway to the rest of Asia. After concluding that the Kra Canal would constitute a “major positive development” [一件大好事] from both economic and security perspectives for China, for Thailand, and for all of Asia, these analysts emphasize that the Kra project would ultimately “achieve risk dispersal” [实现风险分散]. Were India or the United States to attempt a blockade of the Kra Canal, they argue that this hostile power would “pay a higher cost.” The article concludes with the somewhat ominous point that the Kra Canal would be wider than Suez, and could thus accommodate both “large type warships and submarines…”

Predictably, an academic evaluation of “The Kra Canal and China’s Maritime Security” from the December 2015 edition of the prestigious journal Chinese Foreign Policy [中国外交] is somewhat more circumspect. This analysis likewise views the tantalizing possibility of a “golden sea way” [黄金水道]. The author emphasizes the benefits for not just China, but also Japan and South Korea. According to this analysis, other major beneficiaries will be Myanmar, Cambodia, and Vietnam, not to mention the countries of South Asia too. But the greatest benefit, of course, would accrue to Thailand itself, according to this analysis, as the country could look forward to “realizing leap-ahead development” [实现跨越式发展]. Again, there is a direct link to the “Malacca Dilemma,” but this time that dilemma also refers to the inherent limits placed upon one single strait (Malacca), as well as risks from piracy or terrorism. But once again the war-time scenario arises in which “China’s adversaries will blockade this maritime transport bottleneck for the purpose of besieging and attacking China.”

This analysis is more balanced, because it emphasizes both the challenges and risks of the Kra project, as well as its potential benefits. The author describes cost estimates for the project that are continually rising. Moreover, it is assessed that this project is quite different from either the Suez or the Panama canal projects, wherein those giant enterprises could be certain that shipping demand would exist since the alternate transits were so long and arduous. But it could be harder to recoup the costs of the project in this case, particularly in a sluggish environment for global trade growth. However, the most important barrier to the project outlined in this analysis concerns Thailand itself, of course. It is noted that the level of support for the project in Thailand “is actually not at all high.” The author writes that Thailand “has a strong ideology of venerating traditional lifestyles and also protecting the environment.” Then, there is additionally the risk that instability in southern Thailand could also put the project at risk, as it is recognized that separatists could target the canal. In the end, this analysis is not overly optimistic and suggests that various key countries should let “the market play the leading role …” in settling the controversial matter.

It is reassuring to see that Chinese strategists are coming to grips with the reality that local forces (e.g. environmental activists) may create formidable opposition to large infrastructure projects related to the “one belt, one road” strategy. On the other hand, it is also fair to say that the foreign policy establishment in Washington has generally come around to the conclusion that opposition to Beijing’s set up of the Asian Infrastructure Investment Bank (AIIB) was a significant mistake for US diplomacy. Indeed, a mature and sophisticated approach to China’s rise will not jump at every opportunity to stifle China’s grand plans. Rather, Washington would do well to maintain an agnostic or even modestly supportive disposition toward projects that help knit Eurasian peoples and markets closer together. The Kra Canal is hardly a threat to US national security and, as discussed by the Chinese analyst above, is mainly an issue for the people of Thailand to decide upon.