Could China's Collapsing Stock Market Take Down Its Economy? 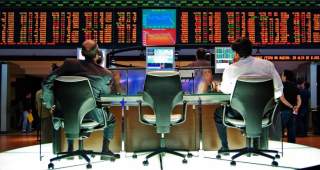 Stocks finished mixed in China on Monday. The failure to trigger strong rallies after weekend announcements of Beijing’s market rescue plan suggest shares will continue their recent plunge, which threatens to take down the broader Chinese economy.

At the Monday close, the widely followed Shanghai Composite Index was up 2.4%. The Shenzhen Composite, however, lost 2.7%, and the Nasdaq-like ChiNext, a board of stocks traded in Shenzhen, fell 4.3%.

China’s stocks are still in positive territory for the year and especially for the last 12 months. Nonetheless, Beijing is now implementing a rescue plan, the result of emergency meetings in the Chinese capital after Premier Li Keqiang, the country’s economic czar, returned from his trip to Europe.

A $19.3 billion stock stabilization fund, an apparent ban on initial public offerings, fresh funding for margin debt, and other measures unveiled on the weekend were intended to signal strong central government support for higher valuations. Beijing on Saturday even named its price target for the Shanghai Composite: 4,500 points, a level 22.1% above last Friday’s close.

The rescue package didn’t work well on Monday. All three indexes opened up sharply but fell the rest of the day. Upticks in the last hour of trading prevented an across-the-board fall. It is not hard to see why stocks could not hold onto gains during the day. For one thing, the rescue package is far too small to have much of an effect. The $19.3 billion is, for instance, equal to only about 15% of a single day’s trading volume.

Moreover, the core of the government’s rescue package is a program of buying shares included in the Shanghai Composite, which covers larger companies. This tactic will obviously tend to push that index up—as it did on Monday—but it does little for small caps. Retail punters, who have largely driven the market in recent months, are mostly invested in those smaller enterprises. And it appears that margin calls, which have been forcing down prices in the last few weeks, mostly relate to small cap companies. In short, Beijing’s rescue plan does little for the people needing relief the most.

Yet the main problem with the rescue plan is not in its numerous technical flaws. The essential problem, as Anne Stevenson-Yang of Beijing-based J Capital Research pointed out in a July 6 research note, is that the Chinese central government lost credibility last week. Saturday’s measures came on the heels of weeks of actions intended to bolster prices, such as reductions in benchmark interest rates, the loosening of margin debt rules, and the suspension of new stock offerings.

Yet those actions had failed, and by the beginning of trading this week not many thought China’s technocrats could reverse the downward trend for more than a few days. Monday’s stock movements confirmed that the central government package was both inadequate and ill-conceived.

And maybe the product of desperation. As Fraser Howie, co-author of Red Capitalism: The Fragile Financial Foundation of China’s Extraordinary Rise, noted this weekend about the government rescue package, “It all strikes me as panic.”

Why should China’s leaders feel so uneasy? Incredibly, they publicly took credit for rising stock prices—a bubble unconnected to corporate earnings or economic growth—even when it was evident that there would be a reckoning at some point. Now that prices are in fast retreat, they do not want the blame that inevitably follows.

So why should Beijing even try to engineer a bubble in the first place? Some think Premier Li and his technocrats were arrogant, that they believed they could control markets even though daily stock turnover in China had surpassed that of the U.S.

Apparently, they thought rising stock values would permit Chinese companies to raise cash by selling stock at high valuations. The proceeds from stock sales could then be used to pay back debt. This tactic would permit corporates to retire obligations at very low cost.

Growth of gross domestic product since the end of 2008 has been largely debt-fueled. In reality, the country’s total debt-to-GDP ratio is probably approaching 350%, dangerous territory for any economy but especially an emerging one like China’s.

China, therefore, needed a vibrant economy to retire debt, but recent growth has been anemic, far less than the official National Bureau of Statistics claims. Monetary stimulus, especially since November, has been an obvious disappointment. For instance, four reductions in benchmark interest rates since that month have not had a noticeable effect. The same can be said for the three reductions in the reserve requirement ratio since February, an attempt to free up liquidity by allowing banks to lend more of their funds.

The government could create GDP by building more infrastructure, but that “solution” results in an even heavier debt load, especially because Beijing must spend about seven yuan—largely financed by new indebtedness—to create one yuan of output. How many more “ghost cities” does China need?

It is not hard to see why monetary and fiscal stimulus programs are failing Beijing. The fundamental problem is that there is a lack of demand in China. Recent double-digit declines in imports—in May imports fell 17.6% year-on-year—speak volumes about what is happening inside the country.

Some say President Xi Jinping’s “One Belt, One Road” initiative—a plan to build transportation infrastructure to connect China to Africa, the Middle East, and Europe—is a way to facilitate the sale of Chinese goods to new markets, but that looks more like a good way to waste a trillion dollars in other countries than create substantial growth in China this decade.

Structural economic reform? Despite bold promises, there has been little positive change. Even if Mr. Xi thought that would be a good idea—and he apparently doesn’t—he cannot implement reform in time. The economy is, in reality, tumbling, growing in the low single digits as statistics on electricity consumption, trade volume, and construction starts show. Reforms can take years to produce a positive effect, but Xi needs GDP now.

That leaves the stock market boom, a reckless tactic. If Premier Li cannot get his emergency measures to work in the next few days, stock values will continue their plunge—and likely take the broader economy with it.

Why would the contagion spread? For one thing, Li has been forcing state entities and financial institutions to buy stock to support prices. This means critical market participants are now sitting on large unrealized losses. For another, panic spreads fast.

At this moment, it looks like Beijing’s primary hope for its economy rests on volatile stocks in Shanghai and Shenzhen. No wonder you can smell desperation in the Chinese capital.