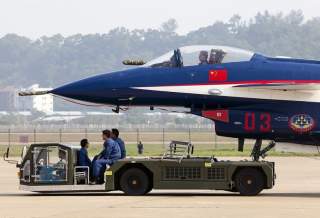 Global attention has focused on the plunge in the Shanghai stock market and mounting evidence that China’s economic growth is slowing dramatically. Moreover, the contagion appears to be spreading, characterized by extreme volatility and alarming declines in America’s own equity markets. Those worries are compounded because there always have been doubts about the accuracy of Beijing’s official economic statistics.  Even before the current downturn, some outside experts believed that Chinese officials padded the results, making the country’s performance appear stronger than it actually was. If China is now teetering on the brink of recession, the political incentives for officials to conceal the extent of the damage would be quite powerful.

The focus on the possible wider economic consequences of a severe Chinese economic slowdown is understandable, since the ramifications could be extremely unpleasant for the U.S. and global economies. But we should also be vigilant about how such economic stress might affect Beijing’s diplomatic and military behavior. It is not unprecedented for a government that feels besieged to attempt to distract a discontented public by fomenting a foreign policy crisis.  In Henry IV, Shakespeare pithily described that process as the temptation to “busy giddy minds with foreign quarrels.”

China’s leaders likely feel increasingly uncomfortable. The implicit bargain that has been in place since the onset of market-oriented reforms in the late 1970s has been that if the public does not challenge the Communist Party’s dominant political position, the Party will deliver an ever-rising standard of living for the people. The bloody Tiananmen Square crackdown in 1989 was a graphic reminder of what happens if the Party’s position is challenged. However, until now, the economic portion of the bargain seemed secure, characterized by breathtaking, often double digit, rates of growth. It is uncertain what happens if the Party can no longer maintain its part of the implicit bargain, but it is likely that a dangerous degree of public discontent will surface.

Beijing might refrain from deliberately provoking a major foreign policy crisis, since the Chinese economy depends heavily on export markets, and access to those markets would be jeopardized by war. However, the need to preserve and strengthen national unity and distract the public from mounting economic troubles is likely to impel Chinese leaders to adopt very hardline policies in at least three areas. And all of those situations entail the danger of miscalculations that could lead to war.

One issue is the South China Sea. Beijing has made extraordinarily broad territorial claims that encompass some 90 percent of that body of water. China is pressing its claims with air and naval patrols and the building of artificial islands. Those policies have brought Beijing into acrimonious disputes with neighbors such as Vietnam and the Philippines, which have rival territorial claims, and with the world’s leading maritime power, the United States, which resists any manifestation of Chinese control over the South China Sea and the crucial commercial lanes that pass through it. The conditions are in place for a nasty confrontation. Chinese leaders have already stressed the country’s alleged historical claims to the area, and made it clear that it will not tolerate being subjected to humiliation by outside powers. Such arguments are designed to gain domestic support by reminding the Chinese people of the country’s long period of weakness and humiliation in the 1800s and early 1900s.

A second issue is Taiwan. Beijing has long argued that Taiwan is rightfully part of China and was stolen from the country in the Sino-Japanese war in 1895. Although Chinese leaders have exhibited patience regarding the issue of reunification, relying in large measure on growing cross-strait economic ties to entice Taiwan to eventually accept that outcome, Beijing has also reacted very sharply whenever Taiwanese officials have pushed an agenda of independence, as during the administration of Chen Shui-bian from 2000 to 2008. The danger or renewed confrontation is rising, since public opinion polls indicate that the nominee of Chen’s old party, the pro-independence Democratic Progressive Party, will be Taiwan’s next leader.

A new crisis in the Taiwan Strait would be extremely serious, since the United States has obligated itself to consider any Chinese efforts at coercion as a “grave breach of the peace” of East Asia. Yet there is little doubt that there would be widespread domestic support on the mainland for a stern response by the Beijing government to a Taiwanese attempt to enhance its de-facto independence. Indeed, there might be more political danger to the regime if it did not take a strong stance on that issue.

The third possible arena for crisis is the East China Sea. China is increasingly adamant about its claims to the Diaoyu/Senkaku islands, which are under Japanese control.  From China’s perspective, those islands were stolen by Imperial Japan at the same time that Tokyo took possession of Taiwan following the 1895 war.  And ginning up public anger against Japan is never difficult. China just finished celebrating the 70th anniversary of the end of World War II, which is touted in China as “the Chinese People’s War of Resistance Against Japanese Aggression and the World Anti-Fascist War.”  Recalling Japan’s invasion of China, and the resulting atrocities, was a prominent theme of the various commemorative events.  But the animosity is not based solely on historical grievances.  Anger at Japan over the ongoing East China Sea dispute and other matters has already produced anti-Japanese riots in Chinese cities, characterized by attacks on Japanese businesses and automobiles. There is a powerful incentive for Chinese leaders to take an uncompromising stance on the Diaoyu/Senkaku feud, confident that the Chinese people will back such a stance.

All of this suggests that the United States and its allies need to proceed cautiously about dealing with China, especially on these three issues. Now is not the time to press a Chinese leadership that likely feels beleaguered by the country’s economic woes. The last thing we should do is give those leaders further temptation to distract the Chinese people with a foreign policy confrontation. Such a strategy entails the grave risk of miscalculation and escalation, and that would be a tragedy for all concerned.

Ted Galen Carpenter, a senior fellow at the Cato Institute and a contributing editor at The National Interest, is the author of ten books and more than 600 articles on international affairs.  His latest book, Perilous Partners: The Benefits and Pitfalls of America’s Alliances with Authoritarian Regimes, will be published by the Cato Institute later this month.