Could China's Renminbi Rival the Dollar as the Next Reserve Currency? 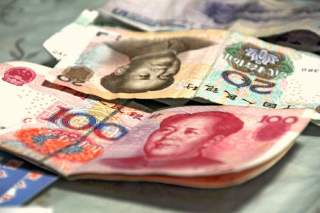 China has made a request of the International Monetary Fund (IMF): It wants the IMF to recommend the Chinese renminbi as a reserve currency. Being a reserve-currency economy would give China easier and cheaper access to capital (something an indebted China is likely to cheer). But there are also drawbacks. Reserve currencies tend to be in high demand, pushing up the value of their currency relative to where it would otherwise trade. This makes exports less competitive and imports more competitive. China is unlikely to welcome such an outcome. Whether or not the IMF says “yes”—and to what extent—has the potential to shift the global economy toward a duopoly with two dominant reserve currencies—the U.S. dollar and the Chinese renminbi.

The odd thing about the above statement is that the renminbi is not yet considered a reserve currency. The IMF would confer this honor by adding the renminbi to its Special Drawing Right (SDR). The SDR is a sort of IMF reserve currency consisting of specific allocations to stable, global currencies—a guide to what global central banks should hold for reserves. Currently, this is the yen, euro, pound sterling and U.S. dollar. There are a couple reasons the IMF could decide that the renminbi should not have reserve status—such as its nonfree floating status or the role of the state in the Chinese economy, or the potentially destabilizing effects of disturbing global central banking in a time of extraordinary monetary policies. Regardless of the near-term issues, the renminbi is likely to be a reserve currency at some point—officially or not.

There is the possibility the IMF may approve the renminbi as an official portion of its SDR in November. Being added to the SDRs would essentially elevate the renminbi to reserve currency status—and give it a recommended holding size. But this is only the first piece of a much larger puzzle around the renminbi and reserve-currency status.

Recently, China has been at the center of two new institutions with global aspirations: the so-called “BRICS” bank and the Asian Infrastructure and Investment Bank (AIIB). These institutions could, and maybe should, be considered counterpoints to similar Western establishments such as the IMF itself or the World Bank. Infrastructure is needed in much of still emerging Asia, and—by providing the funding and framework to construct it—China makes strides toward achieving economic and political duopoly status with the United States.

These new institutions are important, not only for their potential influence on development in emerging Asian economies, but for the renminbi. If the renminbi gets approved as a reserve currency, the emerging world is likely to seize this as an opportunity to use it in trade with their primary trading partners. For many countries that rely on commodity exports to China, it makes sense to trade using renminbi. Not to mention that the aforementioned new development institutions may well function with a heavy dose of renminbi. This allows the renminbi to more easily become the reserve currency of the Southeast Asian region (which makes the transition to becoming a significant global reserve currency much easier).

Though China is simply executing the U.S. playbook, the legitimacy of these institutions should not be simply thrown aside. China has spent the past decade bringing its infrastructure up to par. It knows how to execute this type of infrastructure growth model—something Western powers cannot bring to the table. These are China-led institutions with Chinese goals at the forefront, constituting a significant deviation from the current Western-oriented Bretton Woods model that has dominated global economic influence in the postwar era.

The other factor in play here is the continued saga between Greece and the rest of Europe. The potential consequences of a “Grexit” and the possibility of the euro currency collapse should not be underestimated. In the near term, the financial destruction of China’s largest trading partner—Europe—would be difficult to overcome without significant economic consequences. But it would also force central banks to rethink their reserve-currency allocations, and therefore their long-term economic alignments. If Europe and the monetary union begin to implode, China could emerge as the primary beneficiary of the carnage in the long run.

There are reasons to believe that the renminbi would gain share even without an implosion of the euro. Central banks appreciate stability, and China may actually provide the stability they crave, relatively speaking. China also has the highest yields—meaning the currency would be attractive. Critically, the U.S. dollar does not have to lose any share of its central bank reserves for the renminbi to become a significant factor. The U.S. dollar comprises around 63 percent of global reserves with the euro in the low 20 percent range. This is where the opportunity lies for a viable secondary candidate. The euro is the second largest reserve holding, and the renminbi allocation would likely come at the expense of the other European currencies. In many ways, this may actually be welcomed by Europe. The outflow of reserves, assuming it is not too significant, would assist in keeping the value of the euro depressed. This could create problems as the U.S. dollar appreciates relative to the euro and sterling as those currencies are sold to compensate for the euro.

The spillover from adding the renminbi to the SDR has the potential to accelerate the shift to a truly bipolar economic regime. One in which the United States is likely to still dominate—but with fewer and fewer advantages over rivals. If the renminbi bursts onto the international scene, it has the potential to cause a sharp transition between currency regimes. This type of violent, unexpected transition risks sparking a crisis in the short term, though little of the longer-run story would be altered.

If all goes smoothly for China, central banks will spend the next decade or so trading euros for renminbis. Economic hegemony has already given way, regardless of the IMF’s decision. Influence has, and will continue to, pivot to Asia. There are no givens in economics or politics, but it appears that China and the United States are on the precipice of an economic and political duopoly with all the benefits and perils that come with it.