Could Geoengineering Save the Planet from Global Warming? 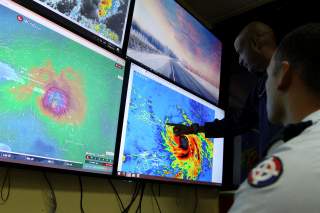 When rainfall is measured in feet, not inches, we are witnessing climate change bearing down on us. Catastrophic destruction tied to the Atlantic hurricane season, monsoon rains in Mumbai, and downpours in Niger are just a few of the many extreme weather events that are being intensified by global warming.

While the rise of a few degrees in temperature may not be enough for a person to spike a fever, that change is enough to radically impact the earth’s climate. According to NASA, “a one-degree global change [in temperature] is significant because it takes a vast amount of heat to warm all the oceans, atmosphere, and land by that much.” By way of comparison, the earth was once rendered largely uninhabitable by a one to two-degree Celsius drop in temperature—an era now referred to as the Little Ice Age.

In response to the threat posed by global climate change, most nations have committed to significant mitigation efforts, through the Paris Agreement, to reduce greenhouse gas emissions. Countries are also aggressively working on climate change adaptation to restore wetlands, erect seawalls and build local resilience to the effects of global warming.

But will these collective efforts be enough?

Some scientists are trying another approach, exploring new tools to deliberately alter the global climate system. These discrete and diverse technologies are often grouped under the all-encompassing and poorly defined rubric of “climate engineering” or “geoengineering.” These radically different approaches, which are in various stages of development, aim to either halt the process of global warming by removing greenhouse gases from the atmosphere or to counteract warming already under way.

Carbon dioxide removal entails taking carbon dioxide out of the atmosphere and storing it in the ocean, plants, underground, or commercial materials. Solar radiation management seeks to offset greenhouse gas-induced warming by either increasing the amount of sunlight reflected back to space or by preventing solar radiation from reaching the earth’s surface in the first place.

The problem is, while several tools seem to be gaining traction in computer models, laboratories, and even real-world experiments, public discourse has not kept pace with their advancement. To date, there has been too little transparency and international dialogue around the progress, feasibility, risks and benefits of these efforts. Documenting and tracking the array of tools in development is crucial for understanding their full impact, debating their implementation, and safeguarding their appropriate use.

The public will need transparency and discourse before these methods could gain acceptance and be considered for wide-scale adoption.

Climate engineering and current mitigation and adaptation efforts are not mutually exclusive. Experts generally agree that these new technological approaches alone are unlikely to provide adequate protection from the dangers posed by rising global temperatures. It will be important to compare technologies and assess how they best fit with climate actions already underway. This will require input from the wider scientific community, social scientists, policymakers, lawyers, ethicists, nongovernmental organizations and citizens. Broad expertise is needed to anticipate, prevent and moderate the possible unintended consequences of these systems for our natural, social, political and economic systems.

More than fifty years later, the field of climate engineering remains largely unknown, especially to policymakers and the public. There are real risks to opting into—or out of—climate engineering. While it is tempting to simply be categorically for or against climate engineering, decisionmakers are at a crossroads where it is more critical—and more responsible—to gather scientific facts and ask as many questions as possible about what the deployment of these technologies might mean for individuals, societies, nations and regions. As technologies advance, those who deploy them will need to respect political borders, protect the global commons, and abide by cultural norms.

Beyond the headlines of the current nightmares across the Atlantic, Houston, Mumbai and Niger, a rapid rise in the earth’s temperature will impose high costs on not only the environment and human health but also every nation’s economic and physical security. The next wave of climate action, which entails experimenting with technological backstops for a warming world, cannot be wished away. Instead, policymakers, industry and civil society must identify risks by asking the right questions, and they must reduce potential conflicts by engaging in broad public discourse before any planetary-scale actions are taken.

Deborah Gordon is the director of the Energy and Climate Program and a senior fellow at the Carnegie Endowment for International Peace. A chemical engineer by training, Gordon’s research focuses on oil and climate change issues, both in North America and globally.

David Livingston is an associate fellow in Carnegie Endowment for International Peace’s Energy and Climate Program, where his research focuses on emerging markets, technologies and risks.