Could an Iran Nuclear Deal Transform Relations with America? 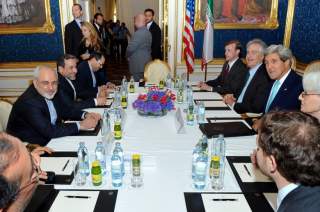 In the midst of crises in Ukraine and Gaza, an important moment in ongoing nuclear talks between Iran, the United States and its international partners passed with little notice – a four-month extension of the negotiations.  The failure to reach a deal was not unexpected, considering the complexity of issues that the two sides need to resolve – in particular how much uranium-enrichment capacity Iran will be allowed to maintain.

But below the surface of these talks, is an issue perhaps even more consequential and certainly interrelated: what would a nuclear deal mean for Iran’s relationship with the West and in particular, the United States? This question—and the prospect that the answer may be a thawing of relations—has, ironically, brought hardliners in Iran and Israel together in common purpose. It could wind up either derailing an agreement or narrowing its ultimate impact.

For Iranian hardliners (and this includes the Supreme Leader, Ayatollah Ali Khamenei) rapprochement with the West is akin to an existential threat—not to the nation of Iran, but to the ruling regime. Antagonism and ideological hostility toward the West and in particular, the United States, is one of the core values of the Islamic state. “Rivalry is the basis for the revolution” says Alireza Nader, an analyst at the Rand Corporation. Without it, the legitimacy of Iran’s current political system would come into question.

“Resistance to the United States is like oxygen for the hardliners,” concurs Meir Javedanfar, an Israeli academic of Iranian descent and the editor of the Iran-Israel Observer blog. They are scared of a positive image of the United States, says Javedanfar. They are even scared of Obama. “When you have a U.S. president use diplomacy and nonviolence to coerce Iran, it confuses the hardliners. The regime understands how to deal with threats. It doesn’t understand how to deal with a friendlier United States.” For Khamenei, in particular, this view of the United States is colored by a conviction that the ultimate goal of American diplomacy is regime change. While the “excuse for the sanctions” is the nuclear issue, Khamenei said in a 2011 speech, the “enemy’s goal is to hurl the Islamic Republic to the ground.”

A warmer relationship between the United States and Iran—along with the lifting of economic sanctions after a nuclear deal—could open up Iran to the outside world. For most Iranians—including Iran’s moderate president, Hassan Rouhani—this is a feature, not a bug. But for hardliners, this type of U.S. soft power is seen as perhaps the most significant long-term threat facing the revolution. This fear was evident in the recent arrest and subsequent public humiliation of six young Iranians for taking part in a YouTube video for the song “Happy.” These arrests were likely initiated by hardliners in the government precisely for the purpose of undermining Rouhani as he works to seal a nuclear deal with the West—or to send a warning for those who believe an agreement will lead to a larger cultural shift inside Iran.

Hardliners fear that a deal would give Rouhani “a political win with which he can build momentum and claw back some of the areas of foreign policy that he doesn’t control,” says Colin Kahl, a professor at Georgetown University and a former deputy assistant secretary at the Pentagon for the Middle East. “Right now he only has the nuclear file, and everything else is with the Revolutionary Guards.” While a nuclear deal wouldn’t be enough for Rouhani to immediately gain that sort of influence, says Kahl, it is the necessary starting point for him to try and flex his political muscles. An agreement would strengthen Rouhani’s political position, particularly in light of the national parliamentary election in early 2016.

Though Rouhani’s electoral victory is evidence of the growing constituency in Iran for normalized dealings with the West, there is little indication that major changes are afoot. Even in the wake of a deal, Khamenei would likely resist any big shift in the U.S.-Iranian relationship.

Ironically, Iran’s most implacable regional adversary, Israel, would be cheering the Supreme Leader on. While Iranian and Israeli hardliners have very different reasons for fearing warmer relations between Iran and the West, they both are threatened by the rapprochement that a deal could catalyze.

To be sure, Israeli political leaders have other reasons to oppose a deal with Iran. Some, particularly Prime Minister Benjamin Netanyahu, see an Iranian nuclear weapon as an existential threat and believe a nuclear deal wouldn’t prevent Iran from eventually getting a bomb. Even Israelis in the security establishment who don’t share Bibi’s gravest fears nonetheless worry that an agreement will leave Iran with “breakout capacity” (i.e. the ability to produce a bomb within a year or two if either side reneges on a deal)—the mere potential to go nuclear would allow Tehran to throw its weight around in the region and thus reduce Israel’s strategic flexibility. At the very least, it could force Israeli leaders to think twice about acting militarily in the region.

So even if a deal with Iran didn’t hold the prospect of Iranian-Western rapprochement, there would be resistance to it in Tel Aviv. It is deepened by the additional threat that Israel’s bitter enemy could gain some measure of international legitimacy and, worst of all, improved relations with Israel’s most important ally—America.

Israel’s idea is that Iran is the evil force in the region—and since they see Obama as naïve about the Middle East they doubt he will challenge the Iranians. Once nukes are off the table then the assumption is there might be some joint understanding between the Iranians and the Americans.

In order to achieve greater accommodation with Iran, the United States could provide less unqualified support to Israel and approach the region with greater even-handedness.

This could manifest itself in stronger pressure on Israel to resolve the Arab-Israeli conflict, diminished backing for Israeli military adventurism or greater acceptance of Iranian influence in the region. With Obama focused on the so-called Asian pivot, a deal with Iran would also be yet another piece of evidence that America and Israel’s interests in the region are moving in divergent directions.

All these factors—the various Israeli fears about the terms of a nuclear deal and about the geopolitical implications of a deal—mean that, for the Israeli leadership, the preferred outcome is failure. Same goes for Israel’s hawkish allies in the United States. This may help explain recent efforts in Washington to either derail a deal or potentially scuttle it down the road.

Yet even with all these powerful forces arrayed against an agreement, that doesn’t mean talks are doomed. In Iran, for example, the calculation on talks has evolved. While there remain those who want no agreement at all there is today a relative consensus that a deal is needed to throw off the yoke of crippling economic sanctions, which have caused enormous hardship in Iran. Inflation has skyrocketed. Unemployment has risen to 10-15 percent and by some estimates, might be double that amount, and the economy shrank by nearly 6 percent last year. This has transformed the cost-benefit analysis for Iranian leaders. So while hardliners will not accept a bad deal, they are far more willing to go along with an agreement than they were just a few years ago.

The challenge for hardliners will be to limit the impact. They are fine with having a fling with the West, but they’re not interested in a long-term relationship.

If an agreement is reached at some point in the future, “Khamenei and his allies in the Revolutionary Guard will seek to build a firewall against better relations with the West and in particular the United States,” says Javedanfar. Israel will likely take a similar position—decrying a deal while pointing out Iran’s continued destabilizing behavior elsewhere in the region. To that end, they will get plenty of support from their allies in the United States—and ironically, their sworn enemies in the Arab world, like Saudi Arabia and the Gulf States.

While hardliners in Iran, Israel and the United States might find themselves with little choice but to accept a nuclear deal, they will be working tooth and nail to make sure that’s as far as things go.

Michael A. Cohen is a fellow at the Century Foundation. This article was published in collaboration with The American Foreign Policy Project.