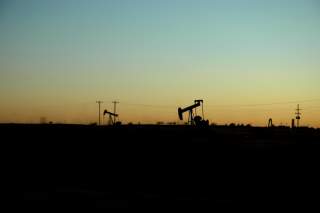 The growth in oil production in the United States is forecasted to cause financial strain on oil exporters by lowering oil prices; as Edward Morse put it, “Lost market share and lower prices could pose a devastating challenge to oil producers dependent on exports for government revenue.” Such statements are common, but they are not very credible. Even if we assume that oil prices will fall (they have not yet), the financial impact on oil exporters will vary—and many oil exporters are much better prepared to cope with lower oil prices than in the 1980s.

The reference point for much of this discourse is a country’s fiscal break-even oil price—the price at which the budget is balanced (some analysts also look at current account breakevens). According to the International Monetary Fund, the Middle Eastern oil exporters in 2013 balanced their budgets at an oil price that was $38 per barrel higher than in 2008. Such trends are read to mean “financial trouble.” Robert Blackwill and Meghan O'Sullivan, for instance, referenced the $40 per barrel increase in Saudi Arabia’s fiscal break-even oil price between 2008 and 2014 as proof that the country is “already facing growing fiscal constraints.”

But this is not the only or even the most appropriate way to interpret fiscal break-even prices and their growth in recent years. If we take the Middle Eastern oil exporters as a sample, we see that governments hesitated to spend much more after oil prices rose in 2004, partly because they remembered the 1980s and wanted to ensure the windfall would last before spending it. In fact, government expenditures as a share of GDP from 2004 to 2007 were on average two percentage points lower than from 2000 to 2003 as countries spent cautiously, saved and repaid debt. Lowering debt, in particular, was a core objective: by 2007, public debt to GDP averaged 13 percent versus 40 percent in 2000.

The Middle East oil exporters boosted expenditures at different points, for different reasons and for different ends, but by 2010-13, most counties spent about as much as a share of GDP as they did a decade earlier (except Algeria and Libya, which had civil wars at the start or end of the period). Thus, the rise in fiscal break-even prices reflects the correction in government spending as governments trusted that high oil prices were here to stay and recognized that they could no longer afford, politically, to wait. It is ironic that what would otherwise be considered prudent fiscal policy—wait before you spend, repay debt—is in retrospect interpreted as a problem.

This is so different than the 1970s and 1980s, which still frames how people think about lower oil prices. OPEC production fell by 50 percent from peak to trough in the late 1970s and 1980s, exports fell by 60 percent, and prices declined by 70 percent in real terms over an eight-year period. Meanwhile, many OPEC countries had not only spent their oil windfall but had also borrowed to finance their development programs—debt-to-GDP levels doubled or tripled in many countries in the decade after the first oil shock. When oil production and prices fell, countries had to adjust spending as well as dealt with a debt overhang that took decades to resolve.

Even so, oil exporters today do need higher prices to balance their budgets, and this affects their economies and for pricing strategies (for OPEC members). But this is not the same as equating lower oil prices with serious financial strain. For one, many countries have sizeable buffers; the Middle East oil exporters, for example, had $1.4 trillion in official reserves in 2013, and hundreds of billions of dollars in sovereign wealth funds. Low public debt also means that these countries can borrow more easily—including from each other. And their current account break-evens are far below their fiscal break-evens (on average $28 per barrel less), meaning a shortage of hard currency is not as high a concern—meaning they can finance deficits through inflation.

Nor is it clear that lower oil prices will cause budget deficits right away or force governments to make “draconian budget reductions” (to quote Blackwill and O'Sullivan’s words on Russia). Governments can muddle through when money is tight, and they first cut spending in politically easier areas. When oil prices fell in the 1980s, for instance, Saudi Arabia exhausted capital spending (which fell by 85 percent from 1981 to 1988) before touching current expenditures (which stayed flat). Other oil exporters behave similarly—as do developed economies that tend to protect spending geared to special interests or powerful constituencies.

Governments can also redistribute the oil pie to raise more revenue. Malaysia, for example, increased six-fold the dividend paid out by PETRONAS, its national oil company, between 2003 and 2008. Russia, too, has changed export duties or mineral extraction taxes many times, as have other jurisdictions in order to offset lower revenues or to finance greater expenditures. Of course, these adjustments can be painful and carry short- and long-term repercussions—but they can delay and cushion the impact on government finances from lower oil exports.

None of this means that oil exporters will not feel the pinch from lower oil prices (if prices fall) or that all exporters are similarly able to cope with changes in oil prices. Nor should we discount the political, economic, and demographic challenges that oil exporters face. But we should not expect dire fiscal consequences, and certainly not immediately. Some countries will struggle, but many countries also struggled when oil prices were high (for example, Nigeria or Venezuela). To draw a clear line from oil production in the United States to lower oil prices and then to serious financial strain in oil exporters is too deterministic and simplistic. We need a more sophisticated and granular way to look at this issue.

Nikos Tsafos is a founding partner at enalytica and is currently advising the Alaska state legislature on gas commercialization issues. He was previously a director with PFC Energy, with a portfolio that included overseeing research and gas fundamentals and leading the firm’s global gas consulting practice.