Could Mike Pompeo’s Nomination Actually Be Shot Down? 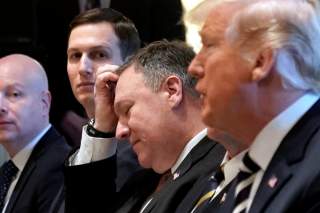 FP reports of a “brutal confirmation fight,” a “nail-biter vote,” a confirmation that is “definitely not a deal” and reporter Robbie Gramer ribs the White House for “acting as if … Pompeo’s confirmation as secretary of state is a foregone conclusion.”

Pompeo, for what it’s worth, has also treated his approval as near-assured, even before getting the nomination feeling out allies for jobs in Foggy Bottom, including Juan Zarate of the Foundation for the Defense of Democracies and the Financial Integrity Network, as I’ve reported. Mr. Zarate could also soon be up for a Senate-confirmable job.

So is Pompeo a shoe-in?

An aide to a prominent Democratic senator confirms things are definitely heating up against Pompeo—but to what end is unclear.

An aide to another prominent Democratic tells me ailing Sen. John McCain, the swing Republican, will vote, and will vote against Pompeo.

Why? “Torture,” the source, who represents a Democrat who is friendly with the Arizona senator, told me. McCain hasn’t been to capitol since December.

Pompeo’s record is hawkish, and he has spoken favorably of some controversial Bush administration policies, but is he out of line of what most Republicans would have have said from 2011 to 2017 (the years he represented a Kansas district in the House)? Pompeo attacked President Barack Obama for closing CIA black sites. Some have accused him of having an ax to grind against Islam, with a history of some questionable associations, as highlighted by the New York Times Friday morning.

As a Republican in opposition Pompeo repeatedly chided Obama for failing to “take the war on radical Islamic terrorism seriously.” But such language was commonplace in the GOP—Pompeo’s nomination to run the CIA, which oversaw black sites and is arguably a more sensitive position than Secretary of State, was among then President-elect Trump’s least controversial. Last year, he sailed through confirmation.

“If you were ordered by the President to re-start the C.I.A.’s use of enhanced interrogation techniques that fall outside of the Army Field Manual, would you comply?” Feinstein asked Pompeo during his Senate confirmation in January 2017. “Senator, absolutely not,” Pompeo responded.

A senior aide to a senior Democratic senator says of that vote: “I think, a year ago, there was more of a sense of this is a new president. . . . There was more an inclination on the part of some members to work with the president constructively. That has evaporated.”

Pompeo is as pedigreed as they come, checking off all the boxes of a blue chip conservative politician: West Point valedictorian, Harvard Law graduate, former small businessman, national security hawk (but represented the Kochs’ district in Congress). He will easily unite the conservatives in the upper chamber, sans (debatably) McCain (if he votes) and Rand Paul, who has struck out a bold stance against both Pompeo and CIA nominee Gina Haspel, as I’ve reported on. But Haspel, who actually oversaw a black site, could be a softer target for Paul.

However, the first woman nominee in history could perform charmingly in her confirmation hearings, putting pressure on a united Democratic front, as well—namely the hawkish, up-for-reelection McCaskill.

A former CIA agent who worked in the agency, and later closely with the Bush administration, in the same post-9/11 period as when Haspel ran a black site in South Asia describes Haspel as a typical career officer who was following U.S. policy at the time—not a zealot for torture.

This source also says Pompeo will be confirmed, and argues much of the discussion about his fate amounts to political theater.

Further, talk of Senate Foreign Relations Chair Bob Corker actually voting against Pompeo, as floated by Gramer, is likely puffery, my Senate sources tell me. It would be a “extraordinary,” says one Senate source.

Because of Sen. Paul, Pompeo risks a possible negative recommendation out of Corker’s committee. But it won’t thwart his nomination.

Though the retiring Corker has an acrimonious relationship with the president, he has policy prerogatives to achieve (and fleeting presidential aspirations to maintain) before heading for the exits.

These goals will be intensive on coordination with the administration: namely, passing out a new Authorization for Use of Military Force (AUMF) that would update the United States from the immediate post-9/11 framework and give Secretary of Defense Jim Mattis expansive new powers. A vote against a cornerstone national security team member, that would existentially imperil his nomination at state, would likely obliterate any future chance of much coordination by Corker’s office with the Trump administration.

“I don’t think it’s a cakewalk,” a Democratic Senate source tells me. But if McCain either doesn’t vote, or votes in favor, or “if one Dem breaks, he’s fine.”