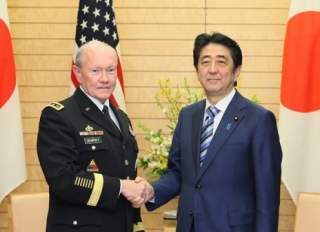 No one shouted this time. A half century ago, the Okuma auditorium in Tokyo was the scene of a dramatic cry for a greater Japanese voice in its alliance with the United States—and a remarkable gesture, from a visiting Robert F. Kennedy, that it might be forthcoming.

This March, at a symposium at Okuma with a different Kennedy presiding, the theme of inclusion rang out again.

Both the exhibition and symposium discussed the Kennedy administration and its legacies in the realms of science and space, civil rights, and counterproliferation.

As I chronicled in a previous article for The National Interest, the Kennedy years were pivotal in U.S.-Japan relations. When the president took office, relations were deeply troubled. In May 1960, the streets of Tokyo swarmed with protesters opposing the renewal of the U.S.-Japan Security Treaty.

Many Japanese people feared that the alliance would draw Japan into war with the Soviet Union, and worried about the Americans’ embrace of Japan’s wartime leaders (now their anticommunist LDP allies). Many Japanese people also railed against U.S. control over Okinawa, which it had seized in the war. Locals resented the massive U.S. military footprint and the debauchery and violence committed by American servicemen.

The 1960 protests jolted Tokyo and Washington into realizing that they needed to do more to build support for the alliance among the Japanese people. Kennedy sent Japan scholar Edwin O. Reischauer to Tokyo as ambassador, who argued for an “equal partnership” between the two countries. Leaders on both sides also began planning a U.S. presidential visit to Japan, which would be the first in history.

This is not how it’s supposed to be

In 1962 President Kennedy sent his brother Robert, the U.S. attorney general, to advance the visit. During his week-long stay in Japan, RFK visited farms, factories, and schools, and attended many talks and debates. One afternoon he went to Tokyo’s Waseda University to participate in a debate in the Okuma auditorium.

Earlier that day, a Waseda student leader, Tachiya Yuzo, sat down with faculty planners and discussed the debate format. Tachiya, though deeply critical of U.S. policy, says he was impressed by the fact that the attorney general “was willingly walking into and having a open debate with students.”

The Americans entered the large hall filled with the cacophony of three thousand people. U.S. State Department official Brandon Grove recalled, “There was unrest, booing, stamping feet; rival groups on the floor.” Kennedy began to give a speech, using his interpreter from the U.S. embassy.

Tachiya, standing in a crowd in front of the stage, was shocked. He recalled, “I could see the confusion on Professor Nakajima’s face, who was assigned to host and be in charge of the event proceedings.” So Tachiya shouted, “This is not how it’s supposed to be!” and demanded a proper debate, with Waseda faculty chairing and translating as planned.

Kennedy aide John Seigenthaler described “a skinny little Japanese boy, tense, shouting, shouting, shouting, screaming at the top of his lungs, really red-faced – just completely wrought up emotionally.” Eventually a resigned Kennedy stopped talking and, gesturing to what Seigenthaler called the “little wraith of a kid,” extended his hand and pulled Tachiya onstage. To debate. While Kennedy held the microphone for him, the student hollered a lengthy criticism of U.S. policy, beginning with a demand for the United States to restore Okinawa to Japanese sovereignty.

After Tachiya, Kennedy resumed speaking of shared American and Japanese goals, and of the importance of the exchange of ideas and free debate, which was impossible in Communist societies. Grove recalled that Kennedy’s words and his gesture to Tachiya “really seized the imagination of the people there.” And beyond: the event was televised.

The Japanese people saw, as Seigenthaler put it, “Bob’s guts, and his obvious willingness to let the boy talk.” The event ended with students regaling the Americans with a thunderous singing of Waseda’s school song. The Americans, helped by their interpreter, chimed in gustily.

The drama at Okuma symbolized a broader effort during those years to transform the alliance. The Kennedy administration and their LDP partners created educational exchanges and forums for scientific, cultural, and political cooperation that would engage generations of people on both sides. Through such efforts American and Japanese leaders sought to change U.S.-Japan relations from a narrow military alliance imposed upon (and resented by) the Japanese people into an “equal partnership” embraced by both societies.

The symposium last month, on that same Okuma stage, showed that indeed much has changed. Instead of showing an outsider shouting to be heard, the symposium on JFK’s legacy showcased partners who today seek each other’s talents and counsel to tackle shared issues of concern.

As the first of two panels showed, these issues extend beyond the realm of military cooperation to include societal challenges with which both countries are grappling. On this panel, the theme of diversity and inclusion was discussed along with JFK’s leadership in space. Charles Bolden, former astronaut and now the NASA administrator, praised fellow panelist Japanese astronaut Koichi Wakata for his highly inclusive leadership while managing a multinational team aboard the international space station, where Wakata had been the first Japanese commander.

Scholar Marie Oshima –  a mechanical engineer and one of Tokyo University’s few women faculty – spoke of the challenges Japanese women face in the fields of science and technology. “Young women feel they can’t step forward,” she said, “They feel reluctant and anxious to step forward.”

Bolden, the first African American to head NASA, exhorted young people to forge forward despite exclusion: “Just go. Do.” Panelist Carol Fulp, CEO of The Partnership, delivered a riveting personal testimony to JFK’s leadership in civil rights legislation. “As an African American, a woman, and a disabled person,” she said, she would have been invisible. “But because of what he did, I am visible to you.”

One symposium attendee, 25-year old Tokyo resident Kasumi Iwama, commented that she was struck by the panel because inclusion was such a challenge in Japan – that “women, handicapped, and LGBT members of society” were undervalued. Iwama said that discussions of this “are not widespread and part of the public consciousness,” but that she hoped that conversations like this would encourage greater debate.

Across town, another event the following day echoed the theme of inclusion. A visiting Michelle Obama announced with Akie Abe, wife of Japan’s prime minister, a Japan-U.S. initiative on girls’ education. “Like so many girls across the globe,” Mrs Obama said, speaking of her childhood, “I got the message that someone like me wasn’t supposed to have big dreams; that I should keep my head down, my voice quiet, and I should make myself just a little smaller to fit other people’s modest expectations.”

The First Lady said that the initiative between Japan and the United States, “Let Girls Learn,” was a natural one because the two countries are both democracies that respect human rights, care about education, and contribute actively to international development projects.

Though the March symposium showed that the allies have made tremendous progress toward Reischauer’s goal of an “equal partnership,” noticeable exclusions remain. Although in 1962 a bold Tachiya brought the issue of Okinawa onto the stage, this time it wasn’t invited back. A second symposium panel focused on the theme of JFK and foreign policy, but paid relatively little attention to contemporary alliance challenges—and no attention to Okinawa.

Peculiar, for two reasons. First, although the eventual return of Okinawa to Japan was legislated in 1971, it was actually an important accomplishment of the Kennedy administration. Reischauer believed that a crisis over Okinawa could happen at any time, and would damage or even destroy the alliance. So as ambassador he devoted tremendous energy to negotiating the reversion of Okinawa with both the U.S. military and the Japanese. This effort floundered for a while after the president’s assassination, and was not realized until the Nixon years. But Reischauer’s contribution was an important Kennedy-era legacy, and thus a strange omission from a panel on that topic. But that’s the problem with non-events; though always eager to assign blame for a crisis that did happen, we forget to confer praise for one that didn’t.

Okinawa also belonged on that stage because it still remains a vexing challenge in the U.S.-Japan alliance.

In the past few years, as Japan’s dispute with China over the Senkaku/Diaoyu islands grows more heated, with aircraft and ships from each side circling around the disputed islands, Shinzo Abe’s government has emphasized the dangers that Chinese military modernization and territorial claims pose to Japan. In this environment, the U.S.-Japan alliance and Okinawa’s bases acquire even more significance than in the past. But also in the past few years, Okinawa’s anti-base movement has accelerated, and in general alliance managers face a more complex political environment.