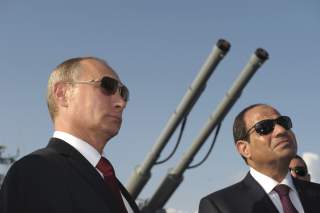 In August 2017, American and Egyptian forces resumed Operation Bright Star after an eight-year hiatus due to both the Arab Spring and the former President Barack Obama’s ire at Egyptian human-rights abuses. That Operation is a biennial military exercise intended to showcase both the political alliance between Washington and Cairo and their two military’s tight relations. The most recent operation capped a new honeymoon in U.S.-Egypt ties that began with President Trump's election and continued with a state visit in Washington and the release of long-imprisoned American aid worker Aya Hijazi.

But, will warm U.S.-Egypt ties persist? And, if they sour against the backdrop of Congressional human-rights sanctions and simple neglect, could Russia be poised to flip Egypt? While perhaps unimaginable to diplomats who, for a generation, have taken Egypt’s Western orientation for granted, the answer is unfortunately yes.

Throughout the Cold War, Egypt was a prize, too important to cast aside. For instance, President Eisenhower stood up not only to Israel but also North Atlantic Treaty Organization allies France and Great Britain after they invaded Egypt to reverse Egyptian president Gamal Abdul Nasser’s nationalization of the Suez Canal. But Egypt nevertheless moved into the Soviet orbit, training Egyptian pilots in Russia and ultimately culminating in a Treaty of Friendship under Nasser’s successor Anwar Sadat. But deft American diplomacy managed to flip Egypt back into America’s camp where, especially after the Camp David peace accords between Israel and Egypt, it has remained a cornerstone of American regional security policy.

As Russian President Vladimir Putin seeks to dislodge American influence in the Middle East and raise Russia’s great power status, Cairo is increasingly in Moscow’s crosshairs. For example, Putin has agreed to resume Russian flights to Egypt that were suspended the same year after a terrorist attack downed a Russian charter flight killing over two hundred Russian tourists onboard. This move comes at the same time as the American Senate Appropriations Committee holds up $300 million in aid until Egypt compensates an American injured when the Egyptian military fired on a group of tourists near the Libyan border.

This matters because the Egyptian economy is heavily dependent on tourism and because Russia has been the single most significant source of tourists to Egypt for years. In 2010, for example, prior to the Arab Spring, tourism brought nearly $13 billion to the Egyptian economy. Also, official calculations do not capture the myriad indirect benefits, including cash tourists, spend on the streets, all of which has a significant positive impact on Egyptian households. The return of Russian tourists also helps Egypt's current leader, Abdel Fattah el-Sisi, resist stringent International Monetary Fund demands for Egyptian reform. Additionally, for Moscow, economic partnerships have ulterior motives. For example, a May 23 agreement to establish an industrial trade zone in Port Said puts Russian political interests astride the Suez Canal.

Furthermore, Putin is cultivating Egypt in other ways. In December 2017, Putin and Sisi agreed on a $30 billion deal for Russia to build a nuclear power plant for Egypt. It should be noted that construction is scheduled to begin by the tenth anniversary of Obama’s decision to scrap a U.S.-Egyptian nuclear partnership that began during the George W. Bush administration.

Besides, Cairo increasingly looks to Moscow for military cooperation and weaponry for which, rightly or wrongly, the Egyptian military is desperate for as it fights an Islamic State-affiliated insurgency in the northern Sinai Peninsula. Whereas the U.S. Congress often holds up arms deliveries due to human-rights concerns, Russia has no such qualms. Nor does Putin forbid secondary sales, something Egypt seeks as it works to prop up proxies in the ongoing Libyan conflict. Finally, the two countries have held joint naval drills and broader military exercises and, in March 2017, Moscow deployed Special Forces to help Egypt on the Libyan border. Against this backdrop, Cairo’s acceptance of Moscow’s position in Syria should not surprise anyone, nor its recent decision to decline United States requests to send Egyptian troops to Syria.

Too often, analysts dismiss Egypt’s flirtation with Russia as posturing. This would be a mistake. Egypt provides fertile ground for Putin’s ambitions. “The U.S. and the West in general have traditionally underestimated the Egyptian nationalist sentiment and deep-seated social and religious conservatism,” Robert Rook, a Towson University expert on Egypt who taught for years at the Cairo American College, explained. “Egypt fully intends to implement an independent course of the United States.” Moreover, with Egypt’s economy struggling, older Egyptians look back fondly—if not accurately—on their purchasing power when Soviet-Egypt ties were tight.

For too long, American policymakers have set their Egypt strategy as if Cairo and Washington are alone in the sandbox. They don’t see that there is a far greater game at play. Alas, that blindness may soon rob the United States of one of its key Arab allies.

Anna Borshchevskaya is the Ira Weiner Fellow at the Washington Institute for Near East Policy.