Could Spain Go the Way of Yugoslavia? 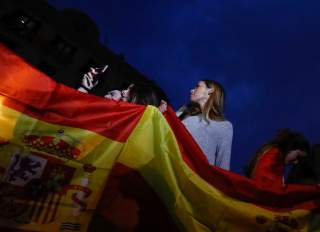 In recent years, the European Union has been bogged down by one crisis after another—from Greece to the Euro to Brexit. But happily, none of these have endangered what has underpinned European integration since the late 1940s: securing lasting peace among European states. Europe has not been spared political violence, as residents of Northern Ireland and the Basque country can attest to. But to almost all Europeans, the notion of armed conflict within their midst is no longer even thinkable. While the Catalonia crisis is not destined to degenerate into large-scale violence, European and American leaders do not appear to take the potential for conflict seriously. They are mistaken.

The Catalan crisis was triggered by utterly irresponsible behavior on the part of both the region’s and Spain’s leaders. While opinion polls show a majority of Catalonia’s residents oppose independence, Catalan leader Carles Puigdemont called a referendum on independence that was rushed through the local parliament and was, by all standards, illegal. Unsurprisingly, since opponents of independence would not cast a vote in an illegal poll, less than half of eligible voters took part. Yet defying logic, Puigdemont concluded the pre-ordained yes vote gave the region a “right” to independence.

Had the Spanish government simply ignored the referendum, nothing would likely have come of it. But instead, Mariano Rajoy’s government sent in the paramilitary Gurdia Civil to prevent the vote from being held. In scenes not seen in Europe for decades, they seized ballots, shot rubber bullets and physically dragged people away from polling stations, injuring hundreds.

To students of ethnic conflict, this sequence of events is all too familiar, and reminiscent of how conflicts in Yugoslavia and the Caucasus started some twenty-five years ago: passions flame, and irresponsible leaders get caught in a spiral of escalation they can no longer control. Violence polarizes people, and extremists on both sides reap the benefits. Worst-case scenarios need not materialize, but what we know from other conflict zones is cause for concern.

First, officials underestimate what Catalonia’s autonomy means. While diplomats and scholars often advocate self-rule as a solution to ethnic tensions, Catalonia’s autonomy provides the territory with the symbolic trappings of statehood, as well as institutions and leaders that almost by default represent nationalist ambitions. As I show in Autonomy and Conflict, local self-rule helped trigger the wars in the Caucasus in the early 1990s. It could in Catalonia, too. Catalonia’s autonomy means that the region has its own police force, the Mossos D’Esquadra. During Sunday’s vote, the Mossos refused to obey federal instructions to stop the referendum. On several occasions, disputes between federal and Catalan police forces almost led to physical altercations.

Madrid and Barcelona, thus, both control men under arms that are increasingly pitted against each other. If the situation escalates, and Catalan police officers side with their regional leadership, Spain will effectively lose its already tenuous control over the territory. If a single miscalculation leads to real bloodshed, a point of no return could be reached.

Unfortunately, we know how dangerous such a move could be. Political scientists have found the removal of political autonomy to be one of the most powerful triggers of revolt and civil war. One need look no further than Kosovo: in 1989, Yugoslav leader Slobodan Milosevic revoked Kosovo’s autonomy and imposed direct rule over the restive province. This at first triggered non-violent protests. As no one paid attention, this gave way to the emergence of the Kosovo Liberation Army and led to the 1998 war in Kosovo. To a minority such as the Catalans, the removal of autonomy would constitute the ultimate slap in the face, and be received as a denial of both their identity and rights they have come to see as self-evident.

Much more than most European and Americans seem to realize, Madrid and Barcelona are at the brink. They may look down the abyss, not like what they see, and take a step back. Even then, they may no longer be able to manage this crisis peacefully. European leaders, whose reaction has been predictably ham-fisted, do not have the luxury of complacency. They need to act fast to defuse this crisis.

Svante E. Cornell is a Senior Fellow with the American Foreign Policy Council and a co-founder of the Institute for Security and Development Policy in Stockholm. He is the author of Autonomy and Conflict, published by Uppsala University Press in 2002.