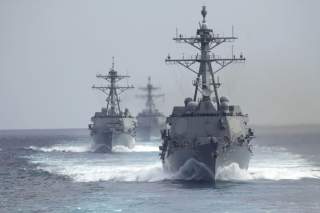 In the South China Sea, where China’s ambitious “nine-dash line” claim of sovereignty has been disputed by several other claimants, relations have in recent weeks turned remarkably chillier. Vietnam and the Philippines are facing the brunt of Beijing’s ire, and the potential for crisis and conflict is significant. Positions are hardening, willingness to compromise is low, and the fact that the Philippines is an ally of the United States raises the potential for a disastrous crisis and potential conflict between the U.S. and China.

The clash between China and Vietnam has attracted more attention in recent days. Just a few days after President Obama’s visit to the region, a Chinese mobile oil rig took position in a carefully selected site that, while closer to the Vietnam mainland than China’s Hainan Island, is just fourteen nautical miles from Chinese-occupied island, a part of the Paracel Island group that is claimed by both China and Vietnam. China sent a large flotilla of ships to escort the derrick; a group that included several armed Naval vessels. After Hanoi expressed outrage at this action and violence against Chinese nationals across Vietnam, Beijing expanded the escort flotilla to over 100 ships. Most recently, Chinese ships interdicted, rammed, and sunk a Vietnamese fishing vessel that was challenging the derrick. Vietnam claims that four ships were attacked in all, and now there are reportedly 113 ships standing off against sixty Vietnamese vessels.

Similar incidents have played out in recent months between China and the Philippines. After China took effective control over the Scarborough Shoal in 2012, Beijing seemed to set its sights on the Second Thomas Shoal—a small land formation about 105 nautical miles from the Philippines but is claimed by both countries. To buttress its claim, the Philippines in 1999 intentionally beached the hospital ship Sierra Madre on the reef and has maintained a small crew on the beached craft ever since (see an exceptional piece about the sailors on the ship and the broader dispute by the New York Times here). Most recently, the Philippines arrested a group of Chinese fishermen found 70 miles from the Philippines near Half Moon Shoal with a ship filled with endangered (and valuable) turtles.

To an outsider, all this hyperbole and saber rattling about small rocks, oil derricks, fishermen, and turtles must seem like much ado about nothing. Yet it is deadly serious—these seemingly trivial issues are used as avatars for deadly serious questions about history, power, ambition, and national sovereignty. An examination of how countries see these issues and how they have behaved in the past provides a window for how they are likely to act in the future. It’s not a comforting thought.

The common denominator in all of the South China Sea’s existing disputes is China. Beijing serves as the primary catalyst for tension and crisis in these disputes. Its declaration of a nine-dash line claim of sovereignty that covers almost the entire Sea is stunning in its ambition and audaciousness: in April, Assistant Secretary of State for East Asia and the Pacific Daniel Russel described the claim as lacking any “apparent basis under international law regarding the scope of the claim itself.” That’s because China has justified its claim by asserting its historical control over those waters, yet the UN Convention on the Law of the Sea (UNCLOS)—which sets standards for defining territorial waters, exclusive economic zones, and the land features that generate them—does not allow for claims based on history. Moreover, while various Chinese dynasties have at various times controlled various islands within the South China Sea, China has never controlled all of them at the same time.

China’s behavior in the South China Sea has changed significantly in recent years. The South China Sea was not a major issue for Beijing for the first few decades after Chairman Mao established the People’s Republic in 1949. It wasn’t until Deng Xiaoping took the reins of power in the 1970s that it became a significant issue in China’s foreign affairs, and Deng set a path for restraint and nonconfrontation. Seeing China as relatively weak and in need of a peaceful external environment to allow China’s economy to develop, Deng pursued a policy to shelve disputes in order to pursue joint development of resources.

As China’s economy has grown more prosperous and powerful, its calculations have changed. The growth of its economy has far outpaced indigenous development of natural resources, and China’s economy has grown ever more hungry for new sources of food and energy—a hunger that the South China Sea can potentially help to address. At the same time, China’s economic, political, and military power has grown exponentially and now towers above the other claimants. Their economies are fundamentally tied to China, which leaves them vulnerable to economic coercion from Beijing, while their political influence and military power now pale in comparison to China’s.

Many of China’s elites have recognized this change in the distribution of power and believe China should act more assertively in the pursuit of its interests in the South China Sea. Led by large state-owned corporate interests such as CNOOC and SINOPEC and abetted by hawks in the PLA, China’s leaders have apparently been convinced that Beijing should abandon Deng’s precedent of restraint and conciliation and instead seek to change the status quo in China’s favor.

China’s strategy toward the goal of strengthening control over the South China Sea has been fairly remarkable for its ingenuity. While certainly assertive, China’s leaders have insisted on a strategy that is restrained and defensive on its face. Beijing always couches its actions as reactions to perceived attacks and incidents from the other claimants. Yet China’s behavior is always to escalate the situation and use its overwhelming power to enhance its claims and strengthen its position.

This approach, which can be called Reactive Assertiveness, is used by Beijing to describe China as fundamentally defensive and its adversaries as the ones causing trouble. With all apparent genuineness, Beijing paints the claims and actions as impinging on China’s national sovereignty—an equivalent to a foreign military force establishing a beachhead in Florida. As one Chinese scholar told me, “This is our territory and we have every right to use any means necessary, including the use of force, to evict them.”

Yet China does not want a war. The tactics at use—fishing vessels and coast guard ships, harassment and ramming without firing a shot—are designed to stay below the level of tension that would rise to the level of an outright conflict. Beijing even attempts to paint its own hostile actions as defensive and the fault of the other party. A day after Chinese ships intentionally rammed and sank a Vietnamese fishing vessel, a Foreign Ministry spokesman urged Vietnam to “immediately stop all disruptive and damage activities” and the Vice Foreign Minister said that no country should doubt China’s determination and will to safeguard the peace and stability of the South China Sea. The message from Beijing is clear: the other claimants should wholly accede to all Chinese claims, and any violence that result from their resistance is wholly their responsibility.

Fear and Loathing in Manila and Hanoi

Leaders in the Philippines and Vietnam see themselves as walking a strategic tightrope. On one hand, China’s economic importance, geographic proximity, and overwhelming military power demands that they maintain a positive relationship with Beijing. Yet their claims of sovereignty in the South China Sea are felt just as strongly and genuinely as they are felt in Beijing, and they feel an obligation to their country to defend its national sovereignty and territorial integrity.

One topic that is raised regularly in both countries is, a bit incongruously, Crimea. Elites in both Manila and Vietnam see much of themselves in Ukraine—a small nation embroiled in a serious territorial dispute with their (relatively) economically vital and militarily dominant neighbor. Russia’s intervention and subsequent annexation of Crimea seemed to demonstrate to leaders in Southeast Asia that economic dependence and military weakness is a geopolitical liability, and that territorial integrity and national sovereignty are not inviolate in the twenty-first century.

These countries fear that Russia has set the stage for China to use force to take control over disputed territories. As a reaction, they are seeking to diversify their economies in order to reduce their dependence on China while also building their own military power somewhat reduce China’s military advantage. Vietnam has in recent years purchased 6 Kilo-class submarines from Russia, maritime patrol aircraft from Canada, and Sigma Corvettes from the Netherlands. The Philippines has likewise announced plans to increase its defense spending and to purchase three decommissioned Hamilton-class cutters from the U.S. Coast Guard, along with twelve new FA-50 fighters from Korea. Both also seek to buttress their defense cooperation with the United States—Hanoi’s engagement with Washington has increased noticeably in recent years, and Manila recently signed an Enhanced Defense Cooperation Agreement with Washington to strengthen defense cooperation and expand the American military presence in the Philippines.

Vietnam and the Philippines will not stand idly by as China gradually erodes their hold on what they believe to be their territory. Yet they also do not want a war with China—their strategy appears to be focused on resisting China’s efforts to erode their claims while buying time to build their power, reduce their dependence on China, and hope the international community will intervene. Manila has brought its dispute with China to the UN Permanent Court of Arbitration, a decision from which is expected near the end of 2015. Moreover, both have turned to ASEAN to bring added geopolitical weight to negotiations with Beijing to develop a legally binding maritime code of conduct in the South China Sea—an agreement that would not affect the disputes themselves, but would considerably reduce tensions.