Could the Baltimore and Ferguson Riots Cost Hillary Clinton the Presidency? 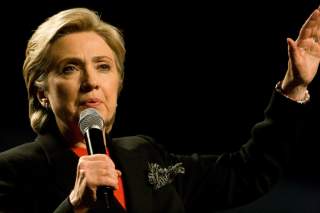 The New York Times published an interesting story Wednesday exploring how the country’s presidential aspirants were seeking to position themselves politically vis-à-vis the Baltimore riots. Times reporters Amy Chozick and Michael Barbaro wrote, “Many of the 2016 contenders seemed either caught off guard or uncertain of how, or even whether, to respond [to the crisis].”

In one important aspect, it doesn’t really matter how they respond. In terms of the 2016 general election, the riots, along with last year’s riots in Ferguson, Missouri, have already established their impact. And, to the extent that that impact is significant, it will harm the political standing of the Democratic candidate. History demonstrates that serious social disruption in the streets always is a net negative for the incumbent presidential party.

This reality is often missed because few political commentators and analysts accept the view that presidential elections are largely referendums on the White House incumbent or incumbent party. The commentators and analysts prefer to see presidential elections as contests in which candidates can cleverly position themselves on any issue and mold public opinion to their own ends. But the referendum view suggests that the electorate is not that easily fooled. In this view, the voters draw their own conclusions based on the facts, not on how the facts are presented or spun by presidential candidates and their minions. Voters cast their presidential ballots based on how they feel about the performance of the incumbent or incumbent party.

Performance has many elements—the state of the economy; questions of war and peace; whether there has been a promulgation of successful domestic initiatives; the incidence of foreign policy successes or failures. And another element is whether there has been blood in the streets or major civic disruptions. The people want peace, prosperity and domestic tranquility. When domestic tranquility is shattered, that becomes a net negative for the party in the White House.

Consider the country’s presidential elections since 1888. During this time—thirty-two elections in all—there were major civic disruptions during eight presidential terms. And in all but one instance, the incumbent party lost the White House.

This is not to say that social unrest, in and of itself, produces electoral outcomes. But it certainly suggests that, as voters render their quadrennial presidential assessments, they take a dim view of presidents who can’t maintain domestic tranquility. And all the debates surrounding street riots—whether local officials should have used more force or less force; how much blame should be attributed to police behavior; whether racism is at the heart of it—don’t matter much when voters cast their ballots.

1888: Widespread labor unrest in the country during the four-year term culminating in this election year, with 600,000 workers off their jobs through strikes or lockouts (up from 300,000 the previous year). Scores of lives were lost in labor violence, and property damage amounted to some $30 million. Then the Haymarket Square bombing episode in Chicago led to the deaths of eight policemen and seven demonstrators. Grover Cleveland, the incumbent president, lost his reelection bid to Benjamin Harrison.

1992: Harrison couldn’t quell the prevailing labor unrest of the day. The so-called Homestead strike dragged on for weeks and led to a day-long gun battle that claimed twenty lives. The steel magnate, Henry Clay Frick, was shot and stabbed in an assassination attempt. It took 7,000 state militia troops to quell the violence. Harrison lost to Cleveland.

1896: Some 690,000 workers were involved in strikes or lockouts. When "Coxey’s Army" of protesters arrived at the Capitol Building in Washington, an effort to remove them led to 50 injuries. Riots ensued, with episodes of gunplay. Many died; scores were injured. Cleveland lost the presidency for the second time.

1932: The Great Depression severely disrupted society, with millions out of work and many homeless. The "Bonus Army," a replay of Coxey’s Army but much bigger, descended on Washington and was violently dispersed by General Douglas MacArthur. Though fatalities were not high, the spectacle raised widespread concerns about U.S. civic stability. The incumbent president, Herbert Hoover, lost the election to Franklin Roosevelt.

1968: The 1965 Watts riots in Los Angeles killed thirty-four persons, with a thousand more injured and millions of dollars in property damage. It took 15,000 National Guardsmen to quell the riot. The next year riots erupted in thirty-eight cities, including Chicago, Cleveland, Milwaukee, Atlanta, and Philadelphia. A year later, six days of race riots in Newark, New Jersey, claimed twenty-six lives and destroyed much of the city, while Detroit later erupted in street violence that killed forty and burned down nearly a quarter of that city. The incumbent president, Democrat Lyndon Johnson, withdrew from the presidential race in March 1968, and his party went down to defeat the following November.

1972: During the Vietnam era, major antiwar demonstrations disrupted Washington and shut down universities throughout the country. In 1970, four students were killed at Kent State University in Ohio when National Guardsmen were called in to quell a demonstration there. Two students were killed that same spring at Jackson State University in Mississippi. But the demonstrations dissipated thereafter, and a relative calm emerged in the land by November 1972. Incumbent Richard Nixon won reelection.

1992: In April of the election year, Los Angeles erupted in six days of riots in the wake of a jury verdict of not guilty against four police officers who had beaten black motorist Rodney King. It took the California Army National Guard, the U.S. Seventh Infantry Division, and the First Marine Division to put down the violence. Fifty-three people died, while 2,000 were injured. That fall, incumbent George Herbert Walker Bush lost his reelection bid.

To reiterate, it would be foolish to suggest that these episodes of social disruption sealed the political fate of the incumbent men or parties who presided over those unfortunate developments. At the same time, this history suggests it is foolhardy for any president or presidential candidate to underestimate the negative political impact of major civic street violence. The American people don’t like it, and they tend to assign responsibility to the incumbent president or party.

Does the violence in Ferguson and Baltimore rise to a level that could have negative consequences for next year’s Democratic presidential candidate? That isn’t clear. There was no death toll, although property damage was substantial. In Baltimore, some 235 people were arrested, and two were shot in the leg in separate episodes. At least twenty police officers were injured, one critically. According to officials, fifteen buildings and 144 cars were set ablaze.

But, if this disruption doesn’t constitute a net negative for next year’s Democratic presidential candidate, it wouldn’t take much more to get there. It seems the electorate takes a view similar to that of Clarence Cobb, who lives in one of the neighborhoods largely destroyed by rioters last Monday. He rode on his bicycle the next day to a devastated part of his city to help in the clean-up effort. "[T]his don’t make no sense," he told the Times. "It’s come to a point where you just got to take pride in your own neighborhood."