Could a U.S.-Russian Deployment Ban Avoid a Nuclear Arms Race in Europe? 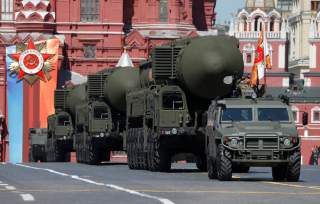 The Intermediate Nuclear Forces (INF) Treaty expires in August when the American decision to withdraw takes effect. This will give Washington and Moscow free reign to develop and deploy land-based, intermediate-range missile (IRM) systems for the first time in more than three decades. Nuclear doves hope for a last-minute reprieve to preserve the gains of disarmament, while nuclear hawks welcome the chance to close a gap that the treaty has imposed on U.S. nuclear capabilities. Yet almost everyone agrees that, for better or worse, the demise of the INF Treaty could herald the start of a new nuclear arms race in Europe and beyond.

Largely absent from this debate is serious thinking about how to manage the risks of a post–INF arms race to U.S. national security. One idea worth exploring is for Washington to propose replacing the INF Treaty with a U.S.-Russia INF Deployment Ban stretching from the Atlantic Ocean to the Ural Mountains (the natural geographic boundaries of Europe). This approach could cool off the simmering nuclear confrontation between the United States and Russia, while still affording each a level playing field to counter IRM threats from elsewhere, such as China and North Korea. This represents a pragmatic approach that holds little risk for the United States and offers some useful potential benefits.

Before examining this idea, we must apprehend how we got here. The INF Treaty is toast. But why? Those who reflexively blame President Donald Trump (or his National Security Advisor, John Bolton, a longtime INF critic) are missing the deeper causes. Despite the Trump administration’s ham-handed initial diplomacy—which left Washington taking, or at least sharing, the blame—the ruination of this treaty lies squarely at Moscow’s feet. It is Russia that disregarded strenuous American protests to develop and deploy multiple operational battalions of a proscribed new system, the SSC-8 “Novator” Ground Launched Cruise Missile (GLCM), all in blatant violation of the treaty’s core prohibition. Meanwhile, Russia’s smokescreen of denials and counter accusations can politely be characterized as unconvincing. The audacious scope of Russian cheating has effectively transformed the INF Treaty into a unilateral disarmament regime, leaving the United States as the only country on earth that is prevented from possessing ground-launched conventional or nuclear cruise and ballistic missiles with ranges of 550–5500 kilometers—systems that not just Russia, but others like China, Iran, and North Korea are building and deploying with gusto. This bizarre situation was never going to be tenable for the United States, Trump or no Trump.

Wherever the fault lies, there are many who mourn the end of the INF Treaty and for many good reasons. The resurgence of U.S.-Russian nuclear competition—with NATO along for the ride—imperils a stable deterrence balance that we now take for granted after three lulling decades of nuclear quiescence. Moscow’s declaration that it will not be the first to deploy INF-prohibited systems is meaningless, because it has already deployed these systems in large numbers. Meanwhile, although Washington is not yet saying if or when it will deploy the IRM systems that it has already begun testing, top U.S. officials hint that any initial deployments would be armed only with conventional warheads. However, Russia is all but certain to dismiss this easily reversible distinction and respond to any American deployments, conventional or otherwise, with new counter-deployments. So buckle up, a nuclear arms race is brewing, and we need to start relearning how to navigate its dangers.

Having pulled the plug on the INF Treaty, President Trump now faces two fraught choices. He can try to press skittish NATO countries to accept IRMs (albeit probably conventionally armed for now), notwithstanding how this could stress NATO’s fraying unity as public opposition coalesces in response to Russian propaganda threatening tit-for-tat targeting and counter-deployments; or, to avoid such a damaging brawl within NATO, he could indefinitely postpone deploying IRMs in Europe (although perhaps still doing so in Asia), notwithstanding how this could embolden President Vladimir Putin’s growing predilection for nuclear coercion if he interprets it as a sign of weakness arising from Russia’s newfound nuclear advantage. However, between these iffy alternatives there is the middle path of seeking a Europe-wide ban on deploying any systems currently prohibited by INF, including those Russian GLCM battalions.

This approach is unlikely to appeal to the ideological poles. It harkens back to a more pragmatic and bipartisan style of American arms control that prevailed throughout the Cold War but has since faded away. In fact, this proposal is from the Cold War. During INF negotiations, with the Soviets stubbornly rejecting an outright ban on these systems, the Reagan administration toyed with a deployment ban for Europe as a workable compromise. In the end, Washington abandoned this idea due to fierce Japanese objections to any treaty that would reorient Soviet nuclear forces away from NATO and toward Japan. However, with an outright ban again off the table, there is reason to hope that this old idea might be worth resurrecting for today’s INF crisis.

One reason why a deployment ban for Europe might be workable today is that a key Russian problem with the INF Treaty focuses on its eastern border facing China rather than its western border facing NATO. Notwithstanding Moscow’s burgeoning geostrategic chumminess with Beijing, the Kremlin has long chaffed at China’s ability to deploy large numbers of INF-banned systems that can target the Russian homeland, while Russia is prevented by INF from responding in kind. The Kremlin has a valid point, since 95 percent of China’s current missile forces would be banned under INF. Indeed, for years President Putin and other Russian officials have been warning that Russia could not continue to abide by INF indefinitely unless it expands to include China and others. Nor is Russia alone, with the Trump administration also objecting to being hamstrung by INF while China bristles with IRMs that threaten American forces, territories, and allies. Put simply, curbing or countering a growing Chinese IRM dominance stands as a rare point of confluence in American and Russian strategic interests. It is likewise a rare wedge in the deepening Sino-Russian strategic alignment that Washington might do well to exploit.

A bilateral European deployment ban would thus afford both Washington and Moscow the free hand they are seeking to counter China’s IRM buildup, while at the same time avoiding a risky and costly new European missile race amongst themselves. From an American perspective, this would be a low-cost way to mitigate the threat that those Russian GLCMs now pose, and without the political risk of fracturing NATO. From a Russian perspective, despite its current GLCM advantage, Moscow stands eventually to be put at a significant disadvantage by the return of American IRMs to Europe, since these systems can threaten a very short-warning strike on key Russian targets, whereas Russian IRMs provide no such reciprocal capability against targets in the continental United States. Consequently, a deployment ban could be a win-win for the Trump administration, which the Putin government might plausibly accept for its own reasons. What’s not to like?

Diehard nuclear hawks will see it as rewarding bad behavior, while at the same time squandering the chance to redeploy IRMs to America’s ultimate advantage. Diehard nuclear doves meanwhile will see a regional deployment ban as an inadequate substitute for the INF Treaty, indeed little more than window-dressing that, if anything, allows Washington and Moscow to get away with disarmament backsliding. That said, at least some not-so-diehard hawks may see the advantages of focusing on one arms race at a time (and China is the more significant potential geostrategic peer competitor, at least in the longer term), whereas some not-so-diehard doves may see the advantages of calming at least one aspect of one nascent arms race (and Russia is the more belligerent challenger to the nuclear status quo, at least in the shorter term).

Beyond ideological objections, there are also very real pragmatic concerns regarding first negotiability, and then breakout. Even if President Putin sees this idea as satisfying Russian interests, he would doubtless try to use negotiations to reprise the very mischief that led Washington to leave the INF Treaty in the first place. For example, Russia could deny that its GLCMs should be covered (they are not INF systems) while insisting that American theater missile defense batteries must be removed (they are INF systems) or at least subjected to onerous inspections. Moreover, no treaty can eliminate Russia’s lopsided geographic breakout advantage. Russian IRMs are road mobile systems, which means Russia could quickly surge them back across the Urals. Therefore, if Washington does propose a deployment ban, it must be prepared to enforce tough-minded measures to mitigate these problems. For instance, predictable Russian negotiating shenanigans should be preempted by making clear that the offer is strictly based on U.S. understandings of INF definitions, reliance on national technical means for verification, and that these basic parameters are nonnegotiable. The United States should also ensure negotiating leverage by securing NATO’s prior public agreement that, if Russia does not accept the proposal, then NATO will automatically move forward with IRM deployments. Finally, the offer should come with a short negotiating deadline that signals America is prepared to walk away if Russia plays unserious games. In other words, this should be a strictly take-it or leave-it proposal with tough consequences for not taking it.