Could Washington Be Dragged into a "Sea" of Fire? 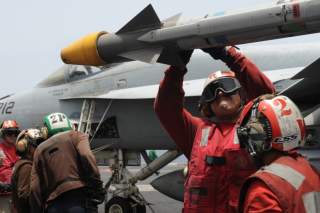 Tensions are rising fast in East Asia as relations between China and several of its neighbors continue to deteriorate.  There have been ominous developments in just the past few days.  Speaking in Shanghai to the Conference on Interaction and Confidence Building Measures in Asia (CICA), Chinese President Xi Jinping issued a veiled warning to countries about forming or strengthening alliances to counter China. “To beef up military alliances targeted at a third party is not conducive to maintaining common security in the region,” he admonished.   Just hours later, the governments of Vietnam and the Philippines issued a statement that they would jointly oppose “illegal” Chinese actions in the South China Sea.

Manila has steadily escalated its territorial disputes with Beijing regarding the South China Sea in recent years, and China’s decision to build an oil drilling platform in disputed waters has caused its simmering dispute with Hanoi to flare.  Although the new bilateral statement falls far short of being an “alliance,” it does indicate the formation of a common front against China’s policies.

Such developments place Washington in a most uncomfortable position.  As the world’s leading maritime power, the United States cannot readily concede China’s extremely ambitious territorial claims.  Those claims regarding the South China Sea, for example, encompass some 90 percent of that body of water.  Much of the world’s commerce, including U.S. trade, passes through the sea lanes in the region.  Allowing the South China Sea to gradually become de facto Chinese territorial waters through the creation of a vast Exclusive Economic Zone (EEZ) would give China a strategic stranglehold in an important region, something that is clearly not in America’s best interests.

At the same time, it is unwise for Washington to provoke Beijing by reflexively backing the positions of its territorial rivals.  Yet the Obama administration has done precisely that, especially with regard to the Philippines.  U.S. military cooperation with Manila is rapidly increasing, and Washington rarely misses an opportunity to offer diplomatic support to President Benigno Aquino’s stance on the South China Sea.

That approach runs the risk of allowing an allied tail to wag the American dog.  Philippines officials have already asserted that the long-standing bilateral defense treaty obligates the United States to come to Manila’s aid if China resorts to force regarding disputed territory. Japan has adopted a similar position regarding possible conflict with China over the disputed Senkaku/Diaoyu islands in the East China Sea.  Although Washington has not yet publicly endorsed Manila’s interpretation of its security agreement with the United States, Obama administration officials have echoed Tokyo’s interpretation of the U.S.-Japan defense treaty.

Such a posture is profoundly unwise.  The various territorial claims in the South China Sea are murky, from the standpoint of both law and history.  Beijing’s claims do seem excessively broad and were certain to be resisted by other countries, but they are not outrageous.  Given America’s own economic and security interests, the United States cannot prudently appease China by accepting Beijing’s maximum position, but U.S. officials also must be careful not to encourage excessively bold claims by the Philippines, Vietnam and other parties—especially if those countries cannot sustain their positions without U.S. military support.

The situation with respect to the Chinese-Japanese feud in the East China Sea is at least as delicate.  Japan is more relevant than any or all of the South China Sea countries as a strategic counterweight to China, and it is Washington’s most important ally in East Asia.  Yet Beijing’s historical claim to the Senkaku/Diaoyu islands may be stronger than its claims in the South China Sea.  Although the islands were not included in the 1895 Treaty of Shimonoseki, which transferred Taiwan and other territories as spoils to Japan following the Sino-Japanese War, Tokyo took control of those islands the same year.  The timing may have been coincidental, but Chinese officials and scholars argue strongly that it was all part of Japan’s aggressive territorial expansion, largely at China’s expense, and that the islands should have been “restored” to China after World War II, just as Taiwan and the other conquered territories were.

As with the competing claims in the South China Sea, it is extremely difficult to determine which country has law and history on its side.  And given the strategic importance of the East China Sea, U.S. leaders are understandably reluctant to alter the status quo to Beijing’s benefit.

But Washington needs to explore ways in which it can accommodate some Chinese territorial objectives without needlessly undermining American interests.  A middle course between appeasement and confrontation is essential.  The current, implicit policy of “anyone but China” regarding the various claims is neither equitable nor sustainable.  Moreover, whatever positions the United States adopts regarding the South China Sea and the East China Sea, they should be based on a careful assessment of America’s best interests, not the interests and agendas, much less the whims, of allies or clients.