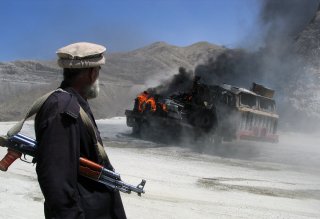 In 1899, Great Britain cut a deal with a separatist leader in Kuwait to make the small Persian Gulf territory a British protectorate. For the British, severing Kuwait’s links to Ottoman Iraq made strategic sense: By empowering Kuwait as a separate entity with a foreign policy subordinate to Britain’s own, the [British] India Office was able to stymie a German plan to build a railhead on the Persian Gulf.

Pakistan may be riding high after the Taliban victory in Afghanistan. Many of Pakistan’s most senior officials celebrate American defeat. This should not surprise anyone. While the United States and Pakistan were allies during the Cold War, the bilateral partnership was always fraught. Pakistan, with reason, resented both that they were America’s second choice and successive U.S. administrations treated them as a fair-weather friend: embracing the Pakistanis when the United States needed the country’s assistance, but ignoring if not sanctioning them when Pakistani support was no longer important for the problem at hand.

Never have relations been so strained though. Both Prime Minister Nawaz Sharif and then incumbent Prime Minister Imran Khan sold out Pakistan’s sovereignty to Chinese investments. With America’s withdrawal from Afghanistan, China seeks a new advantage. Already rumors are rife that the Chinese military will take over operations of the Bagram Air Base and seek to dominate the production of Afghan rare-earth production. The former will be a strategic problem for the United States, even if analysts both exaggerate the latter by ignoring an exponential discrepancy between what Afghanistan may possess and what anyone can extract and gloss over potential Taliban-China tension over the East Turkestan Islamic Movement.

The Biden team may be strategically short-sighted, but a new crop of Republicans—and many Democrats—resent Pakistan’s role derailing Afghan peace and prosperity and its empowerment of the Taliban. An even broader group of American policymakers—including President Joe Biden and his predecessor Donald Trump—justify the American withdrawal because of the need to counter China.

As Pakistan’s cachet plummets in Washington and fear of China grows, the possibility that a future American administration may try a “Kuwait” solution with Balochistan grows. Balochis have their own language and a separate identity. In the decades before the 1947 partition of India, Balochistan—at least those portions not incorporated into Persian—coalesced into a loose confederation of Baloch states under British protection. While some Baloch princely states chose to join Pakistan, the largest and most important—the Khanate of Kalat—asserted independence for several months before Pakistan ultimately absorbed it. The port city of Gwadar, meanwhile, remained part of the Sultanate of Oman until Pakistan annexed it in 1958. Today, Gwadar is among China’s most important investments in Pakistan: it is not only among the most important ports in China’s Indian Ocean “String of Pearls” strategy, but it is also the outlet for China’s multibillion-dollar China-Pakistan Economic Corridor (CPEC). Absent the Gwadar port, CPEC’s strategic and economic potential plummets.

The Balochis have long been restive inside Pakistan. For its first decade, Pakistan neglected the region. It invested little and left the British administrative system in place. In 1958, Balochi tribes rose in revolt against Pakistani rule, and Karachi (Pakistan’s capital before the creation of Islamabad) declared martial law and moved to dismantle the tribal system and erase any notion that Balochistan was a legitimate entity. Against this backdrop, the Balochistan People’s Liberation Front inaugurated a low-intensity guerilla campaign. In 1970, as Pakistan also faced unrest (and eventual secession) of its Bengali population, it acquiesced to the formation of a Balochistan province. Over subsequent decades, civil strife repeated erupted—first during the reign of President Zulfikar Ali Bhutto and then against the backdrop of a 2004 development plan which locals believed would lead to an influx of Punjabis to the region. Balochi militants and terrorists continue to harass Pakistani state forces. (Separate Balochi groups, perhaps funded by Saudi Arabia, likewise harass Iranian forces inside Iran’s restive Sistan and Balochistan province).

As Pakistan not only turns away from the United States but, through its Taliban proxies and China, tries to humiliate Washington, a new generation of American strategists, policymakers, and intelligence professionals may reconsider the redlines that have governed bilateral ties since the Truman administration. Bangladesh, after all, split away from Pakistan and is now a stable and moderate country. It is increasingly conceivable that a new generation of U.S. policymakers less trustful of Islamabad and less concerned with Pakistani sensibilities may question whether it would be a U.S. interest for Balochistan to follow suit.­