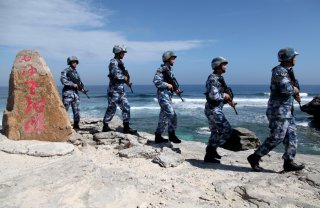 THE RELATIONSHIP between the United States and the People’s Republic of China (PRC) changed more in 2020 than in the past forty years. Cooperation and “win-win outcomes” rapidly devolved into confrontation and “wolf warrior diplomacy.” Preexisting disputes over human rights and escalating tariffs were already eroding Washington’s decades-long China policy before the outbreak of the pandemic, but the bilateral relationship worsened appreciably last year with China’s crackdown on Hong Kong and America’s decertification of the city’s autonomy, not to mention the COVID-19 pandemic. As former National Security Advisor Robert O’Brien put it, “The days of American passivity and naivety regarding the People’s Republic of China are over.”

Initially, the Trump administration pushed a policy of reciprocity with the PRC, singling out unequal trade terms and China’s theft of intellectual property. What came next, however, was a redefining of the relationship. Beginning in 2019, Washington’s critique of the Chinese Communist Party (CCP) fundamentally shifted from a question of fairness to an accusation of malevolence. As then-Secretary of State Mike Pompeo put it in October of that year, “Today, we’re finally realizing the degree to which the Chinese Communist Party is truly hostile to the United States and our values, and its worse deeds and words and how they impact us.” Indeed, Pompeo’s subsequent remarks at the Nixon Presidential Library heralded what could be a new era in U.S.-China relations—one animated by deep distrust. The onset of COVID-19 in 2020 accelerated this strategic shift. China’s initial concealing of the virus’ existence and subsequent stonewalling information-sharing, its attempts to profit off stockpiled personal protective equipment, and its blatant disinformation campaigns about the virus’ origin fed a retributive zeitgeist to “make China pay” for its coronavirus culpability.

This impulse prompted policymakers to fixate on China’s past behavior at the expense of shaping the CCP’s future choices. The result: bad policy ideas defined the debate and hamstrung America’s new approach to China right out of the gate. As President Joe Biden and his advisors craft a new China policy, heeding these warnings is critical to building a truly competitive strategy vis-à-vis the CCP.

CONSIDER LAST year’s push to strip China of sovereign immunity in U.S. courts. Allowing Americans to sue the PRC for pandemic damages is quintessentially populist, but woefully unserious. Doing so would have required new legislation from Congress—which several members enthusiastically introduced—and would almost certainly have been challenged in the Supreme Court for a simple reason: it would upend centuries of international law, and quite possibly the concepts of foreign direct investment and multinational corporations.

In some cases, these bad ideas also sabotaged good efforts. Take “decoupling,” the 2020 buzzword among China hands. While Washington tried to reorient supply chains away from China, some members of Congress also called for the United States to leave the World Trade Organization—a move which President Donald Trump supported. These initiatives worked at cross purposes with each other. The former sought to decouple the international trading system from China, while the latter policy would have decoupled the United States from global commercial institutions. Taken in isolation, reshaping supply chains has a great deal of merit, and several members of Congress introduced legislation that would extricate critical industries like rare earth minerals and pharmaceuticals from Beijing’s influence. But walking away from the rules and institutions that underpin global commerce would send mixed messages to Beijing and America’s partners.

This reactive posture predated COVID-19—from threatening to delist PRC companies on U.S. securities exchanges and targeting Confucius Institutes to prosecuting intellectual property theft and sanctioning human rights violators. To be sure, these initiatives are worthy endeavors, even necessary ones. And the political leaders pushing them deserve credit for rejecting the outdated, naïve belief that engaging China economically would change China politically. Even so, no strategic logic ties these new ideas together. Henry Kissinger cautioned against this danger in his 1994 magnum opus, Diplomacy: “[A]ny pragmatic policy – indeed, especially a pragmatic policy – must be based on some fixed principle in order to prevent tactical skill from dissipating into a random thrashing about.” In other words, an “edit-undo” approach to America’s relationship with the CCP is unserious and insufficient apart from a broader competitive plan. For Kissinger, that broader plan was engaging China. Policymakers today are rejecting that paradigm, but chipping away at the outcomes of a failed policy without a theory of victory guarantees defeat.

AFTER THE dissolution of the Soviet Union, America sat atop the global power hierarchy as the world’s undisputed hegemon. This status, while enviable, has actually crippled the ability of policymakers to think proactively about national security. To wit, grand strategy in the United States is generally taught and practiced as a rote three-step progression: define vital interests, identify threats to those interests, and mobilize national resources to defend interests and mitigate threats. This process has conditioned the United States to be highly reactive, jumping from one crisis to the next. To a degree, this is unavoidable for a hegemon that, by definition, has everything to lose and little left to gain. Thus, the strategic flow begins with risk instead of reward.

Conversely, aspiring global powers approach strategy from a different starting point: relatively little to lose, and much to gain. But, in most cases, force-on-force comparisons are simply unfeasible, so revisionists like the PRC naturally look for asymmetric vulnerabilities in their adversaries. China’s construction of artificial atolls throughout the South China Sea encapsulates this indirect approach to competition: salami-slicing its way into its neighbors’ exclusive economic zones, and establishing facts on the ground that the likes of Vietnam, the Philippines, and others were unable to challenge. By the time the Pentagon raised the issue and Congress sounded the alarm, it was too late. This was by design. Instead of looking at strategy through a defensive prism, the CCP is competing creatively and offensively, beginning the strategic process through the prism of exploiting the hegemon’s vulnerabilities and accentuating its own competitive advantages.

This perspective is woefully underappreciated in Washington today. Academics and practitioners regularly lock horns over why America and China are at odds—the former pointing to global power imbalances and the latter emphasizing antipodal ideologies. Lost in this debate is the equally important question of how Washington is competing with Beijing. The current nationalist-globalist dispute within U.S. domestic politics misses this point entirely because the dichotomy takes place within a preexisting strategy bent toward the defensive. Oscillating, or “thrashing about,” between Trumpian unilateralism and President Biden’s multilateralism will not change this predisposition.

Even a wholesale repudiation of “the end of history” creed won’t save America. Yes, foolish triumphalism predisposed Washington to be reactionary, even lazy, after the Cold War’s dissolution. Today, Washington finds itself once again reentering an era of “great power competition,” and the United States needs to accept this reality. But humility alone cannot change the way Americans think about security. Only a conscious bipartisan effort to practice strategy differently will increase America’s competitiveness vis-à-vis China.

Unfortunately for the United States, the PRC has thought deeply about competition for decades, culminating in Xi Jinping’s “community of common destiny”—diplomatic speak for China’s plan to wreck Washington’s alliance networks and attract erstwhile U.S. partners into its own orbit. But the real danger of Xi’s vision is its intent to supplant Western values of freedom and democracy as ordering principles of international relations. According to the scholar Nadège Rolland, “the CCP would undoubtedly not bring Western conceptions of universal values and human rights into the mix.” At the center of China’s vision for a new world is the One Belt, One Road (OBOR) initiative, now known as the Belt and Road Initiative (BRI)—Xi’s signature foreign policy project and the CCP’s blueprint to displace the United States as global hegemon.

OFTEN DESCRIBED as a twenty-first-century “Marshall Plan,” the BRI is China’s vision for revitalizing the old Silk Roads of antiquity and integrating the Eurasian landmass into a common economic market. The initial concept for the BRI consisted of a land “belt” stretching from China to Europe, with various routes passing through Russia, Central Asia, Southwest Asia, and the Middle East, and a maritime “road” linking Southeast Asia to the West. Over the past six years, however, the BRI has come to encapsulate far more than a Eurasian project. Digital, Polar, and Space Silk Roads, as well as BRI-branded projects throughout Africa and as far afield as Latin America, intimate a broader strategy in Beijing. The BRI is Xi Jinping’s method and message of China’s march toward global hegemony. As such, its success is nonnegotiable for the CCP.

Geopolitically, a top BRI priority is securing land routes to the Indian Ocean, via Pakistan and Burma, and bypassing the Strait of Malacca and flanking India. Of related importance is China’s ability to secure a foothold in the Gulf of Thailand—specifically in Cambodia—which would preposition the People’s Liberation Army to neutralize Thailand and Vietnam in the event of a South China Sea dispute. It could also hamper the ability of the U.S. Fifth and Seventh Fleets to mobilize in a crisis scenario in the Indian Ocean. More broadly, China uses its financial influence from the BRI to shape the foreign policy alignment of countries around the world by leveraging generous investment offers to push its One China principle, thereby isolating Taiwan and raising the political cost to America of defending the island nation.