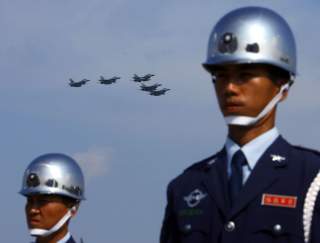 Taiwan’s rise as one of Asia’s most vibrant democracies and an alternative to China’s repressive authoritarian model is viewed with extreme concern in Beijing’s halls of power. From China’s perspective, the existence of Taiwan as a democracy is a grave challenge to its political legitimacy. The Chinese Communist Party (CCP) views Taiwan as its most dangerous external national-security threat, and the People’s Liberation Army (PLA), as the armed wing of the party and guarantor of the regime’s ever fragile legitimacy, has been tasked with the mission of preparing for an assault on the island as its principal war planning scenario. The overarching plan is referred to in restricted-access Chinese military writings as the “Joint Island Attack Campaign.” The campaign includes operations that span the entire spectrum of the modern battlefield, including the air, land, sea, space and cyberspace domains. Even media outlets are a target.

The fundamentally political nature of the dispute means that the Chinese government conducts an ongoing, clandestine campaign of diplomatic, economic and psychological warfare around the globe. This includes operations that spin the news and manipulate international law to delegitimize and demoralize Taiwan. The Chinese military refers to this as “political warfare.” To better prepare the future battlefield, China’s undercover agents of influence blanket Asia, and especially Taiwan, with disinformation. They use state media outlets, business enterprises and cross-Strait educational exchanges as platforms for covert actions. The mission of these messengers is to poison the powers of resolve and weaken resistance to eventual takeover.

The American public has little visibility on China’s anti-Taiwan campaign, which is being waged primarily in Mandarin on the far side of the Pacific. Many Americans experience the effects of it only indirectly. There are reportedly a considerable number of Chinese agents in the United States, who pose as diplomats, reporters, scholars, language instructors, lobbyists and entrepreneurs. Their job, in part, is to shape foreign perceptions about China and Taiwan, and to undercut arms sales and other forms of support for the island. These hostile influence operations are particularly noticeable in Washington and on university campuses across the country.

The result is that an increasing number of everyday Americans have been unconsciously gripped by the hand of Chinese propaganda and treat false information as if it were the truth. Making matters worse, an astonishing number of American companies and colleges have their financial futures anchored in China, making them vulnerable to being subjected to pressures and situations that may run against their moral and ethical principles. The CCP has worked hard to create opportunities for obtaining leverage over those it wants to manipulate or control, and few issues are more important to them than defeating Taiwan.

When viewed from the perspective of Beijing, the risks associated with Taiwan are growing. With thousands of students from China now studying on the island, it may only be a matter of time before greater demand for good governance on the mainland overwhelms its oppressive authoritarian system. In theory, time favors Taiwan because it is on the right side of history. Militarily, however, it is not clear that the Taiwanese self-defense forces can continue to resist China’s buildup. There is a growing chorus of voices that argue the island’s military will soon become too weak to defend against the world’s second most powerful country.

China’s growing national strength has enabled it to advance efforts to politically marginalize Taiwan in the international community. The main focus of Chinese efforts has been Washington, where Beijing has had some remarkable successes over the past decade. Under both the George W. Bush and Barack Obama administrations, China secured long freezes or delays in new notifications of arms sales to Taiwan, and especially important sales were canceled, including new F-16 fighters, diesel-electric submarines, Aegis destroyers and Abrams tanks. At the same time, a string of influential Americans have published articles arguing that Washington should abandon or reinterpret its legal obligations to help defend Taiwan under the Taiwan Relations Act, the law of the land.

China’s successes have been only partial. Attempts at driving a deeper wedge between Taiwan and the international community have served to embitter and repulse the island’s electorate. As has been the case with Japan and many other nations, Taiwan’s greater involvement in the Chinese economy not only failed to cement greater political cooperation, it actually fostered a growing sense of vulnerability and confrontation. In light of demographic trend lines, polling data and election results, it has become increasingly clear that the people of Taiwan want to be treated as citizens of a country recognized around the world for what it actually already is: independent, free and sovereign.

This sentiment has not gone unnoticed in China, where the military has been planning for the worst all along. Internal PLA writings have recently emerged that confirm China plans to use force when it believes that other means are not achieving its strategic objective, and especially when there is a good chance that the United States can be kept out of the fight. These writings state that once China has “exhausted” all nonlethal options to ensure the annexation and occupation of Taiwan, a large-scale amphibious attack will be launched against the island.

According to Chinese military documents, there are scenarios other than invasion. The PLA could prosecute coercive operations against Taiwan, including long-duration (but intermittent) and low-intensity naval blockades and air campaigns. However, they make clear that these are suboptimal solutions that cannot be expected to get at the root problem. Intimidation will fail if the Taiwanese government and the people are impervious to it and unwilling to submit to Beijing’s authority under pressure. For this reason, the PLA is focused on the employment of an all-out invasion campaign.

The chilling official narrative seen in the PLA’s internal literature is that a future invasion of Taiwan is probably inevitable. The exact timing is uncertain, but attacking and conquering the island is a “historic mission” that will not be put off indefinitely. The problem is cast in remarkably simple terms: Taiwan is a “separatist province,” and China’s national territorial integrity remains under severe threat until it is returned to the ancestral “Fatherland.” The following lines crystallize the pro-invasion PLA view:

In the end, only by directly conquering and controlling the island can we realize national unification . . . otherwise ‘separatist’ forces, even if they momentarily compromise under pressure, can reignite like dormant ashes under the right conditions.

Internal documents show that the Chinese military refers to all Taiwanese government and military personnel as “separatist enemies,” with no distinction made for political party affiliation or self-identity. All those who want to maintain the status quo are painted as China’s enemies.

Yet despite the bellicosity of PLA writings, it would be a mistake to think the Chinese military establishment is overly eager for the fight. One PLA field manual, for example, warns its readers (Chinese military officers) that, “The Island has complex geography, and its defensive systems are rock solid around critical targets.” PLA officers are told that only through a massive and masterful military campaign could they take Taiwan. The operation would be an extremely challenging undertaking, the likes of which China has never conducted before, and the sacrifices required would be tremendous.

Much can be done by the Trump administration to bolster Taiwan’s self-defense capabilities and keep the world’s most dangerous flashpoint from erupting in violent action. Unfortunately, the crisis of the moment, North Korea, appears to do occupying the foremost time and talent of official Washington. Much more attention needs to be paid to countering China’s anti-Taiwan campaign.

Ian Easton is a research fellow at the Project 2049 Institute and author of The Chinese Invasion Threat: Taiwan’s Defense and American Strategy in Asia.