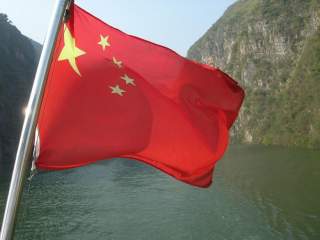 As the South China Sea heats up, one of Beijing’s most important tools—its Maritime Militia or “Little Blue Men,” roughly equivalent at sea to Putin’s “Little Green Men” on land—offers it major rewards while threatening the U.S. and other potential opponents with major risks. When the Permanent Court of Arbitration (PCA) in the Hague announces its rulings on the Philippines-initiated maritime legal case with China on July 12—likely rejecting some key bases for excessive Chinese claims in the South China Sea—the Maritime Militia will offer a tempting tool for Beijing to try to teach Manila (and other neighbors) a lesson while frustrating American ability to calm troubled waters. This major problem with significant strategic implications is crying out for greater attention, and effective response. Accordingly, this article puts China’s Maritime Militia under the spotlight to explain what it is, why it matters and what to do about it.

To promote its disputed claims to features and maritime zones with increasing assertiveness, China is employing not one but three major sea forces—a potent three-pronged trident. In addition to what will soon be the world’s second-largest blue-water navy, and what is already the world’s largest blue-water coast guard, Beijing wields the world’s largest maritime militia, whose leading units are military-controlled forces trolling for territory. Most usefully in the peacetime coercion Beijing hopes to exclusively employ to advance its claims, China’s Maritime Militia remains the least recognized and understood of its sea forces. That needs to change—immediately.

Last October, when destroyer USS Lassen passed near Subi Reef, built up by Beijing in the Spratlys, merchant ships including fishing vessels maneuvered around it, having apparently anticipated its approach. China opposes such freedom of navigation operations categorically. In the future, to turn up the heat, while attempting to preserve plausible deniability and exploit perceived limitations in U.S. rules of engagement, China may employ Maritime Militia vessels more assertively to harass—and even attempt to thwart—such operations. Chinese propagandists might preemptively flood the airwaves with a misleading narrative of selectively edited footage of “civilian fishermen” being “unjustly attacked.” Leading People’s Liberation Army Navy (PLAN) scholar and former deputy naval attaché to the United States Sr. Capt. Zhang Junshe seemed to be laying possible groundwork for just such a (mis)portrayal when he told Global Times that:

Yet, as of today, the U.S. government has demonstrated neither public awareness of the problem nor offered authoritative information to dispel such propaganda. Absent further preparations, this inaction could leave U.S. decisionmakers in a difficult position indeed.

No ordinary fishermen, these! Chinese officials are insulting foreign intelligence, likely in all senses of the word. During Foreign Ministry Spokesperson Lu Kang’s Regular Press Conference on April 7, 2016, when asked, “Is China using the country’s fishing fleet to assert its claim over relevant disputed waters?” he retorted flatly, “There is no such thing as what you said.” Regardless of why Lu responded as he did, on February 2, 2016, China Daily published (and China Military Online reposted) a detailed article that clearly acknowledged precisely such a role for China’s Maritime Militia. “As the People’s Liberation Army upgrades its navy, commissioning dozens of new ships under a watchful global eye, a less noticed force, China’s Maritime Militia, is also improving its operational capability,” it reported. “Most of the maritime militia is made up of local fishermen.” This was followed by an unofficial article on March 7, 2016, in the South China Morning Post, quoting an important Chinese official and a well-published Chinese expert concerning the use of “fishing vessels” to uphold Beijing’s “maritime rights and interests.”

Still more blatant dissembling to a reporter occurred early last month in Tanmen township, a national model for other seaports to emulate since Xi Jinping’s official visit in 2013. There, foreign reporters witnessed a contingent of forty to fifty fatigue-clad militiamen drilling—possibly appearing somewhat similar to this photograph.

A local propaganda official told them that the uniformed trainees were “part of a film crew.” Wang Shumao, the Tanmen Militia’s deputy commander and the leader of its front-line involvement in both China’s seizure of Scarborough Shoal from the Philippines in 2012 and the HYSY-981 oil rig incident of 2014, “denied knowing anything about the militia.” Wang further claimed that his deeply tanned comrades were simply fishermen who “chose to wear camouflage to protect themselves from the sun.” Whatever its future plans, China clearly has something to hide.

Fortunately for open-source analysts, China can be surprisingly transparent, especially in Chinese. Accordingly, the development and employment of Maritime Militia units appear designed to enhance asymmetry perceived favorable to China and to increase Beijing’s initiative—both at the expense of American and other forces. This is no idle speculation. They are well-substantiated policies expressed in authoritative Chinese government- and military-affiliated publications and evidenced in actual Chinese activities.

Some other countries—including the United States—have modest maritime militias to assist with law enforcement, evacuations, disaster recovery, anti-terrorism, and defense of undisputed territory and port facilities. But Beijing doesn’t stop there. Rather, it is virtually the only nation to have—within its massive, expanding military—a growing set of elite irregular sea forces to harass foreign vessels and conduct other assertive activities, such as ramming, to advance contested island or maritime claims. Only Vietnam is known to have similar maritime militia forces—though they are far smaller and more constrained in their nature and scope of operations.

Chinese Maritime Militia units have already played key roles in a series of international maritime incidents and skirmishes throughout the seas near China, particularly the South China Sea. These include China’s 1974 seizure of the western portion of the Paracel Islands from Vietnam, the 2002 sabotage and 2009 harassment of U.S. survey ships, the 2011 sabotage of two Vietnamese hydrographic vessels, the 2012 seizure of Scarborough Shoal from the Philippines, and the 2014 repulsion of Vietnamese vessels from disputed waters surrounding its HYSY-981 oil rig.

In late 1973, months prior to the Battle of the Paracels, Maritime Militia trawlers 402 and 407 asserted their presence and planted flags. During the January 1974 conflict, they played important roles as first responders, providers of early warning and tactical intelligence, springboards for militia insertion and island landings, and rescuers of PLAN minesweepers. As Naval War College professor Toshi Yoshihara explains in his seminal study of the conflict, this irregular sea force played a key political-military role for Beijing in the conflict, containing escalation while facilitating portrayal of Saigon as the aggressor. Case in point: even though an American military advisor was captured together with South Vietnamese troops, a U.S. intelligence report demonstrated acceptance of Beijing’s narrative, deeming the “key step in the escalation” to be “Saigon’s military response to the move of Chinese fishermen into the Crescent [island] group.”

Maritime Militia forces likewise allow China to disrupt foreign survey operations with lower escalatory risks than aggressive maneuvering by PLAN warships would present. The militia can close in assertively under the close, watchful eyes of China’s other two sea forces. The Maritime Militia’s involvement in supporting “rights protection” actions such as China’s seizure of Scarborough Shoal demonstrates its special role in advancing China’s claims. Militia forces were similarly critical in repelling Vietnamese fishing vessels approaching the HYSY-981 oil rig, including by ramming them. The incident also demonstrated China’s ability to mobilize Maritime Militia from numerous localities and maintain a militia presence throughout the duration of confrontation, in this case lasting two months. The Maritime Militia are thus able to fulfill a variety of roles spanning the spectrum of peacetime coercion and wartime confrontation.

Maritime Militia personnel train for a variety of missions, such as search and rescue, reconnaissance, assisting law enforcement and rights protection, light weapons use, and logistics support. In August 2014, for instance, a PLAN South Sea Fleet maritime garrison held a large-scale exercise in the Gulf of Tonkin that simulated the defense of an oil rig. In coordination with PLAN and China Coast Guard vessels, as well as aircraft from the PLA Air Force, the garrison’s Maritime Militia units performed perimeter security functions to repulse advancing enemy vessels and frogmen. Other Maritime Militia units, like those in Jiangmen city of Guangdong Province, have recently trained in reconnaissance. Exercises have also included deception operations to obfuscate PLAN activities, such as by employing corner reflectors on fishing vessels to alter radar signatures. “In peacetime, fisherman can provide first-hand and the most up-to-date intelligence to the navy,” states longtime PLAN scholar Li Jie, “while in wartime, they are the best at logistical tasks such as supplying food and water.”