Countering the Myth of Ukrainian Authoritarianism 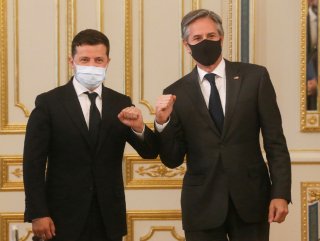 In “Ukraine’s accelerating slide into authoritarianism,” Ted Galen Carpenter contends that the Washington foreign policy “blob” has wrongly painted Ukraine as a “blossoming American-style democracy” when “it bears a much greater resemblance to the pseudo-democratic systems of Russia, Hungary, and Turkey.” He couldn’t be more wrong. While Ukraine has problems, there are numerous reasons why it remains one of the most promising democracies in Eastern Europe. Far from giving up on it, Washington should bolster its support for a vital partner on the frontlines of Europe’s clash with Russia.

Carpenter asserts that Ukraine is neither a smart strategic partner for the United States nor a “model democracy deserving U.S. protection on moral grounds.” In fact, Ukraine is a strategic asset for any nation interested in the type of rules-based international order that Moscow seeks to erode. As the only country in Europe actively engaged in a land war with Russia, Ukraine is, as President Volodymyr Zelenskyy said in an interview this week, the “security wall” of Europe. The Kremlin is bogged down supporting and fighting a war in the Donbas with no end in sight—the U.S. has a strategic interest in proving Moscow’s aggressive expansionism does not bear fruit there. The United States and its allies are contending with Kremlin interference in elections, cyber-operations like the SolarWinds hack—which compromised the US government in a way rarely seen—and violent assassinations within their countries.

Here’s the deal: almost all the tactics used by the Kremlin against the West were beta-tested in Ukraine—from massive infrastructure hacks to disinformation and media manipulation, to the use of violent force and assassination. As Russia escalates its aggressive moves against the US and its allies, there is no better or more experienced strategic partner than Ukraine. As Lt. Gen. Ben Hodges likes to remind us, Washington can learn a great deal both on and off the battlefield from Kyiv.

Carpenter goes on to argue that Zelenskyy, who successfully campaigned for office in 2019 on a populist campaign to root out corruption and modernize Ukraine, has failed to deliver. He points to the case of Viktor Medvedchuk, Ukraine’s leading pro-Kremlin politician, who was charged with treason and placed under house arrest in May. Carpenter cherry-picks elements of the case and frames the charges as part of an “ugly political crackdown” against “Zelenskyy’s most outspoken critics.” In fact, Medvedchuk is charged with violating Ukrainian law by allegedly holding business interests in Russian-occupied Crimea—something that Atlantic Council Senior Fellow Adrian Karatnycky describes as “the mechanisms by which [Medvedchuk’s] extensive political, propaganda, and media activities in Ukraine were funded in collusion with the Russian government.” No doubt there are real questions about whether Ukraine will be able to handle the case properly—though mainly because of its history of letting powerful players like Medvedchuk off scot-free.

Carpenter states after Ukraine’s 2014 Revolution of Dignity, fascist groups and anti-Semitism were on the rise in Ukraine—as evidence, he links to a 2019 article reporting on the anti-Semitic vandalization of three Holocaust memorials in Ukraine. Anti-Semitism is a real issue in Ukraine that deserves more attention, but to claim that the Maidan revolution or the subsequent governments are somehow uniquely and ubiquitously responsible for it is unpersuasive. Nonsense. Ukraine was the only country outside of Israel in 2019 that had both a Jewish president and prime minister. In fact, Ukraine has one of the lowest levels of anti-Semitism in Central or Eastern Europe. A 2019 Pew survey of European attitudes towards minority groups found unfavorable views of Jews among 11% of Ukrainians—for comparison, Sweden sat at 3%, the UK and Germany at 6%, Italy at 15%, the Czech Republic at 17%, Russia at 18%, Spain at 19%, Lithuania at 26%, Poland at 31%, and Greece at 38%.

Meanwhile, the operations of far-right and nationalist groups in Ukraine, like the Azov regiment—recently in the news in the US for training with American domestic extremists who were deported by authorities—are absolutely worth investigating and combating when they threaten national security or the safety of minority groups.

Zelenskyy and his team have made major missteps since March 2020, but all hope is not lost. With smart, vital American support, Kyiv can overcome its sordid legacy of corruption and mismanagement. A flourishing democracy in Ukraine isn’t a pipedream but a worthy goal and a solid path to success. Ukraine accomplishing that could set an example for the whole region—even for Moscow.

Doug Klain is a program assistant at the Atlantic Council’s Eurasia Center. Find him on Twitter @DougKlain.