Courting Disaster: How Not to Manage Existential Threats to National Security 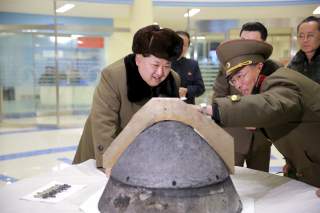 There are a small number of threats to our nation’s security, involving truly catastrophic consequences, which may be managed by good public policy. Some of these involve uncertainties over scientific or technological developments that could lead to good, as well as very bad outcomes. Think designer biology, quantum computing and artificial intelligence. But two stand out both for the certainty and magnitude of their destructive impact: climate change and nuclear weapons.

Climate change is happening to us now and some of its consequences are evident. Glaciers are melting, sea levels are rising, and species are being lost to us forever. If we were the frog in that pot, then we would have noticed a warming trend. Indeed, we seem to have improved in recent years in both our awareness of the many ways in which climate change will badly damage our lives and exactly what kinds of things we should be doing now if we want to limit that damage. But we, in the United States, are not doing them, or at least our government is not doing what it should be doing. Our government is behaving as if we had an option to “put America first,” as though we had our own climate and had no need to share the planet. We have approached the Paris Agreement as though it were the Trans-Pacific Partnership, opting out to make a better deal with . . . the climate. We are acting as though we did not have children and grandchildren. We are not pursuing a public policy appropriate to manage the existential threat of climate change.

We have had nuclear weapons for seventy-five years. We have thousands of them and so do the Russians. If you add the number in the other seven countries with nuclear weapons, then there are a thousand more. While the destructiveness of nuclear weapons varies greatly, the average-sized one would kill millions of people if detonated over a populated area, about half immediately and another half over weeks and months afterward. Nothing else man-made could kill as many people as quickly as a nuclear weapon. For decades we have planned to kill fifty million or so people overnight if we were to be attacked with nuclear weapons. The promise of such retaliation is the essence of deterrence, what we do when we cannot mount an effective defense. And we have never been able to mount such a defense against intercontinental ballistic missiles.

Wars have been fought because of miscalculation. Are we certain that Russia, China or North Korea will not miscalculate with nuclear weapons in a crisis? We have had accidents with nuclear weapons. Do we have reason to believe there will be no accidental launch in the future? The amount of material that is necessary to make a simple device that would kill tens of thousands is baseball-sized. Can we reasonably expect to control indefinitely the tons of this material in a dozen countries without losing a baseball to ISIS?

What does good public policy look like when dealing with nuclear weapons? It looks like actions that reduce uncertainty, increase transparency and security, and decrease numbers. It is called “arms control.” We had a fifty-year history of successfully negotiating treaties aimed at managing the nuclear weapons threat this way. But that is not where our public policy is headed now.

At the beginning of the George W. Bush Administration, we walked away from the ABM Treaty and ever since have been pursuing a variety of programs to build a defense against ballistic missiles: building missiles to shoot down missiles. Of course, normal people would prefer to have such a defense to protect them, rather than to depend upon deterrence, the promise of massive retaliation after suffering an attack. But national missile defense has not proven to be an achievable goal and pursuing it has not been cost-free. In a world in which no side can mount an effective defense, all sides rely on deterrence and the other side’s vulnerability to retaliation as the source of their security. But if one side decides to pursue defense to achieve its security, it promises to destroy the other’s source of security. Washington’s pursuit of national ballistic missile defense for the last twenty years has, as much as anything else, driven Russian and Chinese strategic nuclear weapons acquisition decisions.

It is now only months since the U.S. withdrew from another arms control agreement, the Intermediate Nuclear Force Treaty. We did this because we claimed that Russia had deployed a missile that was prohibited by this thirty-year-old treaty. Although the treaty had successfully banned a whole class of missiles for decades, rather than look for a way to preserve it, we withdrew from it and immediately promised to build and field a new missile, one that would have been prohibited by the treaty.

Paul Warnke, who was a wise man, observed many years ago that the Russian-American arms competition was like “Two apes on a treadmill.” It should be clear that the simile is apt once again and does not reflect a sound public policy to deal with this threat to national security.

Robert Gallucci is a professor at Georgetown University. He was an Assistant Secretary of State for Political-Military Affairs in the George H. W. Bush Administration, and Ambassador-at-Large and chief negotiator of the Agreed Framework with North Korea in the Clinton Administration. He also served as president of the MacArthur Foundation.