Cowboys and Kalashnikovs: Comparing the Mexican-American War to the Conflict in Ukraine 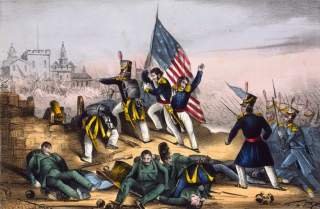 Porfirio Diaz, who dominated Mexico at the turn of the twentieth century, once famously diagnosed the dual source of his country’s misfortunes. "Poor Mexico,” he lamented, “so far from God, so close to the United States."

Diaz knew of what he spoke. The nineteenth century was a particularly unhappy one for U.S.-Mexican relations. By 1848, Mexico had been impelled to cede—by force of arms or its implied threat—what is now the state of Texas, and subsequently the entire southwestern United States. For Mexico, this period involved a disastrous loss of fertile, if sparsely populated, territory. For the United States, it was an unsurpassed geostrategic bonanza, and was arguably the single most important event in transforming the country into a transcontinental great power. A messianic, national-chauvinist, white-supremacist fervor—the animating concept of which, “Manifest Destiny,” was first popularized in 1845—drove the United States to annex Texas that same year, and to fight its great expansionary war of 1846-1848.

Indeed, Texas was the catalyst for the whole affair. In the early 1820s, the Mexican government invited Americans to settle the Mexican state of Coahuila y Tejas, as long as they agreed to certain stipulations (such as conversion to Catholicism and the banning of slavery). The settlers often refused, leading to tensions with Mexican officials. In 1830, further American immigration to Tejas was forbidden. A few years later, federal officials in Mexico City began to attempt to concentrate power in the capital, disturbing regional autonomy. Incensed, “Texians,” as they were then known, waged a secessionist campaign against the Mexican government, winning independence in 1836.

The final status of Texas was never assured: some Americans wanted a friendly but independent buffer state, while others favored direct incorporation into the union. Others still—especially abolitionists, since an independent Texas or American Texas would both presumably be ardent slave states—thought poorly of the whole affair, and would very likely have been satisfied with continued Mexican suzerainty over the whole southwest. (Henry David Thoreau spent his famous night in jail because of his refusal to pay taxes to an unjust U.S. government—that is, one fighting what he considered an immoral war in Mexico.)

It was the question of slavery that kept Texas out of the union for nearly a decade, but once admitted—under President James Polk, a slyly belligerent nationalist—westward expansion took on an inexorable cast. In April 1846, Polk had U.S. troops cross the previously agreed-upon Mexico-Texas border, the Nueces River, and journey much farther west, to the Rio Grande. When Mexican troops then attacked, Polk used this as pretext for war (claiming that the American soldiers were assaulted on domestic soil). By September 1847, victorious U.S. troops were occupying Mexico City. Negotiations there between the belligerents led to the aforementioned transfer (for a price) of California and the rest of the desert southwest.

Think about the dynamics of this war. A smaller, weaker state, internally divided, with poor institutions, shares a large land border with an expansionist regional power that (either through crimes of commission or omission) foments instability there. A large number of ethnonational kin of the stronger state live on the "wrong" side of the border; that is, they are on land not technically incorporated into that country’s territory. Attempts at centralization from the corrupt and inefficient federal government of the weaker state lead to the secession of a hitherto autonomous region populated by co-ethnics of the stronger state. That state then provokes the weaker one into a war it does not want to fight, knowing it will likely lose, but has no choice but to prosecute anyway.

As in Mexico, so in Ukraine. Poor Ukraine, one might even say: so far from God, so close to Russia. Ukraine, too, suffers from poor institutions, and a weak and dreadfully corrupt government. And it continues to fall prey to the depredations of a very powerful state directly across its borders—Russia—a transcontinental empire with significant material, geostrategic, and demographic interests in it, not to mention certain emotional ones. In fact, the history of Ukraine is far more bound up in Russia’s own than Mexico’s ever was for the United States. Nearly one in five Ukrainians considers himself ethnically Russian; a much larger percentage, up to one in three speaks Russian as her native language. And here is a major disjuncture with the U.S.-Mexico case: no American statesman could ever claim, with even the thinnest shred of plausibility, that Texas played a central role in the ancient development of the American nation—which is exactly what Russian nationalists today claim about Ukraine’s history as part of the medieval “Kievan Rus,” which in their eyes prefigured the modern Russian state. For the entire modern era, Ukraine was seen as an integral part of the Russian empire: and from at least the eighteenth century onward, it was.

Take the twentieth century alone. For example, as Tony Judt writes in Postwar, Soviet Ukraine, while only covering 2.7 percent of Soviet territory, accounted for a full 18 percent of its population. With both fertile agricultural land and productive industrial centers, it was responsible for 17 percent of Soviet GNP, and produced 40 percent of all Soviet agricultural output by value. Moreover, the Russian Soviet leadership often hailed from Ukraine itself: Nikita Khrushchev grew up around Donetsk and rose to power through the Ukrainian Communist Party; Leonid Brezhnev was born and raised in Dniprodzerzhynsk; Konstantin Chernenko was in fact ethnically Ukrainian, the child of “kulaks” who had been deported to Siberia. Ukraine was not merely one of the constituent republics of the USSR, it was by far the most important, behind only Russia itself. (There is no analogous claim in the U.S. case in terms of Texas, which was a marginal region filled with marginal people.)

Historical parallels are always in danger of collapsing under the weight of their many divergences. And, for all their similarities, these two cases cannot strictly be seen as morally equivalent: first and foremost, it is anachronistic to graft twenty-first-century international political norms onto nineteenth-century behavior. Predatory territorial annexations, although often lamented—especially by those victimized by them—were far more acceptable in the international political climate in the nineteenth century (and even the first half of the twentieth century) than they are in the twenty-first. Were these instances of national theft immoral in an absolute sense? Very likely. Were they nevertheless widely tolerated at the time, even expected? Yes. We have to be able to denounce and understand simultaneously—with understanding being different than justification.

Still, even accounting for these normative differences, U.S. policy makers and the U.S. public at large could learn from our own past behavior to understand the dynamics of imperial expansion. Russia is not the first great power—nor will it be the last—to intermingle arguably legitimate interests (such as the protection of its co-ethnics beyond its borders) with raw avarice and expansionary zeal. Sometimes, such actions are even carried out in democratic conditions, with an eye toward electoral gain. This was the case of U.S. President Polk vis-à-vis the annexation of Texas, who correctly foresaw how popular this action would be, especially in his native South. The Mexican-American War was itself quite widely approved of—as was Polk’s saber-rattling toward the British, which led to their relinquishing of claims to what is now Oregon and Washington in 1846. There is an important lesson here. Just because a country’s actions are execrated abroad doesn’t mean support for that action is manufactured at home: Vladimir Putin’s annexation of Crimea was greeted enthusiastically by much of the Russian public. It was no less “populist,” in its own way, than Polk’s policies.

Another, rather depressing conclusion one can draw is that regional powers, whether nascent democracies (as in the U.S. case) or autocracies (as in the Russian one), often behave in remarkably similar ways. They also both create spheres of influence. In 1823, the United States, through the Monroe Doctrine, declared the rest of the entire Western hemisphere off limits to interference from foreign powers. The United States, in essence, announced veto power over the domestic politics of foreign countries in the region. In the twentieth century, this veto sometimes translated into direct military occupations—such as in Cuba (twice, from 1898-1901 and again from 1906-1909), the Dominican Republic (twice, from 1916-1924 and from 1965-1966), and Haiti (once, from 1915–1934—a nineteen-year affair). When outright occupation was viewed as imprudent or too brazen, the United States simply had local surrogates carry out its policies: it armed violent counterinsurgencies (such as in El Salvador and Nicaragua in the 1980s) and engineered military coups (such as in Guatemala in 1954 and Chile in 1973), among many other unsavory interventions both covert and overt.

In a more direct, contiguous and uninterrupted fashion—and with incomparably more repression and sociopathic violence, especially under Joseph Stalin—the USSR exercised similar control over Eastern Europe from 1947-1989. (In Ukraine, Stalinist Terror and a state-induced, homicidal mass famine began far earlier, in 1932/33.) The current conflict in eastern Ukraine is a continuation of Russia’s longstanding objective of regional dominance, objectives that very much predate the Soviet Union. But Donetsk is not Prague, or even Vilnius. It is more like Tijuana—if Tijuana were populated largely by English-speaking, ethnic Americans. The tragic dimension of Russian designs on Ukraine should not be understated, but it must be properly contextualized. All wars are not created equal—not even those haunting European capitals with the specter of Russian irredentism, that protean ghost.