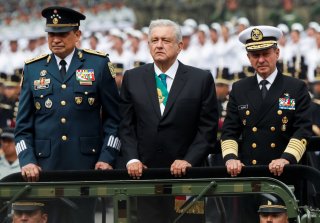 Are Latin America’s armed forces again becoming politically active after decades in which they have largely stayed in the barracks and confined themselves to their normal professional role? We are seeing some ominous signs from Mexico and Brazil—the region’s two largest countries—and, ironically, it is these countries’ elected presidents who are involving the military in their political projects. Mexico’s Andres Manuel López Obrador (generally known as AMLO) is an avowed leftist and opponent of Mexico’s elite. Brazil’s Jair Bolsonaro, a former army captain, is the scourge of the Left. Yet despite their ideological differences, both have sought to pry their nations’ armed forces away from neutrality.

Mexican political leaders had worked for decades to separate the armed forces from political life. Traditionally, Mexico’s military has been respected but kept relatively small and restricted to classic security activities. This has included combating the relatively small Zapatista rebellion in southern Mexico and, beginning under AMLO’s predecessors Felipe Calderón and Enrique Peña Nieto, engaging in anti-drug operations.

When AMLO ran for the presidency in 2018, he campaigned against the military’s role in the counternarcotics effort. This was part of his larger approach to the drug issue, which he argued could not be solved through punitive means but only by increasing social welfare spending—a policy which he termed “abrazos, no balazos” (hugs, not gunshots). This policy, of course, appealed to his leftist constituency which was historically suspicious of the military.

But while he did indeed hit the brakes on aggressive counternarcotics enforcement, the military has by no means been idle. Actions against the drug cartels have slowed, but not ceased, and AMLO has had no choice except to use the military when the absence of state presence in some areas has become glaringly obvious. Parallel to this, he has also called out the military for operations to combat urban crime.

Perhaps the most dramatic step has been the creation of the “National Guard,” a new paramilitary uniformed police body to replace the previously corrupt and ineffective Federal Police. While such entities are found in many countries and range from well-regarded institutions in established democracies such as Spain’s Civil Guard and Italy’s Carabinieri, they can be weapons of repression such as Vladimir Putin’s Rosgvardia in Russia and Hugo Chavez and Nicolas Maduro’s own National Guard in Venezuela.

AMLO wanted his National Guard to be explicitly linked to the military and under the authority of the Secretariat of National Defense (SEDENA), the ministry, always headed by an active-duty general, in charge of the army. But despite AMLO’s preference, the legislation creating the National Guard put it under the civilian-led Secretariat of Security. However, he has recently revived his goal of moving it back under the defense umbrella. But while AMLO himself remains popular, 2021’s midterm elections left him with a reduced majority in Congress and it is unclear if he will be able to gain this transfer.

AMLO’s National Guard, however, remains thoroughly identified with the armed forces. It was created initially by drawing on personnel from the army and navy’s own military police units. While some members were drawn from the now-defunct Federal Police, they are very much in the minority, and allegations have surfaced that the ex-police are treated as second-class citizens within the Guard, for instance being forced to sleep rough while the ex-soldiers are able to spend the night in barracks, and are being encouraged to resign. Senior leadership is largely drawn from those who crossed over from the military.

The guard has been tasked to maintain patrols in Mexico City (where it is building four new barracks) and elsewhere, a decision which has caused concern. Such patrols raise memories of the army’s 1968 deployment to confront protests which led to the “massacre of the Plaza of Three Cultures,” in which university students were gunned down by army units. While nothing comparable has taken place, the National Guard has faced allegations of corruption and human rights violations, and it is unclear if this militarized national police force is likely to do any better in meeting Mexico’s law enforcement needs than its civilian predecessors. Even so, its role has been expanded to include immigration enforcement as poverty-stricken Central Americans seek to transit Mexico en route to the United States.

We’re with the “Transformation”

But domestic security is not the only area where AMLO has sought to carve out a role for the military. He has sought to engage it in his main policy effort: unwinding the economic liberalization which took place under his predecessors and creating a Mexican welfare state based on 1960s-era state-led development concepts. The military, which he has termed “the Mexican people in uniform,” is to have a crucial role in the country’s “fourth transformation” (the previous three having been other perceived key historical moments).

His program includes high-profile infrastructure projects—a new oil refinery, a second airport for Mexico City, and a high-speed passenger rail line linking Mexico City with the Caribbean tourism areas. In the face of both labor and environmental objections and attendant lawsuits, he has declared them to be projects of national security interest placed under the authority of SEDENA, with the goal of legally protecting them from such challenges or from possible privatization by a future administration. The military has taken charge of running the new airport, including providing security. In addition to these flagship projects, the armed forces were given the task of building hundreds of branches of the new “Bank of Well-Being,” a state institution aimed at providing support to low-income Mexicans. Relatively few branches of this bank have yet been built.

AMLO’s bear hug of Mexico’s armed forces has been reciprocated. At the 2021 anniversary of the Mexican Revolution, SEDENA head General Luis Sandoval explicitly stated that the military was committed to the implementation of Mexico’s “fourth transformation,” calling for the Mexican people to be “united in the national project which is on the march.” Subsequently, human rights organizations and the political opposition sharply criticized these comments, concerned that they marked a break from the tradition of the military staying out of politics.

From Captain to President

If Mexico’s armed forces have become entangled in partisan politics, the process has gone even farther in Brazil under President Jair Bolsonaro. While Mexico’s army was edged out of politics by the 1940s, Brazil had a military government that assumed power in the mid-1960s for twenty-one years under the banner of anti-communism and nationalism. While repression and attendant human rights violations waxed and waned, the arrests and disappearances are hardly forgotten.

The departure of Brazil’s military from politics was eased by the fact that the first civilian presidents came from center-right backgrounds, and even when Luiz Ignacio Lula da Silva (generally known as Lula) took office, a modus vivendi was maintained, eased by the fact that Brazil’s commodity boom allowed military funding to remain high, including the purchase of high-performance jet fighters for the air force and the maintenance of a program to develop a nuclear submarine for the navy. Even after the economy soured and charges of unauthorized spending raised against Lula’s hand-picked successor Dilma Rousseff led to her impeachment and succession by a more conservative figure, the question of the military role in politics did not really arise.

This all changed with Bolsonaro’s ascent to the presidency in 2019. A former army captain, he had previously served in Congress where he was regarded as a fringe figure. Indeed, while pro-military, his pet issue had been the defense of junior officers, not something likely to appeal to the generals running the military establishment. His campaign and subsequent presidency have been marked by harsh anti-leftist rhetoric, accusing the Workers Party of Lula and Rousseff of being communists.

Bolsonaro has used intentionally provocative language to make clear his identification with past military governments. He has invoked the memory of Colonel Alberto Ustra, who had led the military government’s secret police, praising him as a “national hero.” He has said that “the dictatorship’s mistake was torturing and not killing.” His son Eduardo touched a sensitive nerve when he suggested that Brazil needed a return to “Institutional Act Five,” the military government’s decree which sharply curtailed basic civil liberties.

As president, Bolsonaro has kept close ties to the military, though not without using his prerogative to dismiss top commanders seen as less than fully supportive. He also placed serving officers in cabinet positions unrelated to defense. Perhaps most controversially, he maintained a general with no relevant background as minister of health during much of the Covid-19 pandemic.

Still, he has taken care to be protective of the military. As inflation has eaten away at Brazilians’ purchasing power, he has made sure that the salaries of the armed forces have been maintained. And major military purchases such as the Air Force’s ongoing fighter jet procurement are going forward despite rising deficits. And in a particularly high-profile gesture, when a former officer now serving in Congress was convicted of making seditious remarks, Bolsonaro immediately pardoned him.