Crime in a Time of the Coronavirus 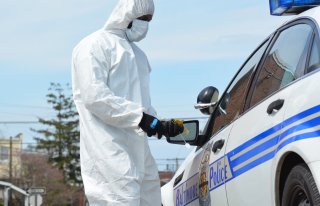 The tide of violent crime that consistently caused chaos in Baltimore slowly receded in the wake of an unexpected deadly pandemic. The coronavirus had quickly created previously unthinkable levels of desperation, suffering, and panic.

People went from interacting with one another in crowded spaces to hiding inside their homes where they could privately nurse their newfound insecurities from job loss, economic instability, and the fear of an untimely demise simply by contracting the coronavirus through social interaction. When they did venture out into the not-so-free world, it was solely for groceries and exercise. The bars were closed. The nonessential businesses were closed. The majority of the churches had closed. The liquor stores were still considered essential though. The drug market was still functioning. And although violent crimes, such as shootings, may have been occurring at a slower pace, they still drove the waves of social dysfunction during the coronavirus crisis.

The sea of sins in Baltimore didn’t disappear along with the economy.

At night, when there were fewer police officers on the streets and fewer people around to witness the occasional atrocity, a small wave of them rolled across the city: a cash register stolen here; a home invasion committed there.

The signs of a new undercurrent stirring beneath the city became more evident after the Baltimore Police Department began implementing new policies to reduce the risk of exposing its officers to the coronavirus.

On March 16, it placed restrictions on the types of vehicles that could be admitted into its main tow yard. On March 17, it announced in a department memo that it would be directing citizens with low-priority complaints to a phone line in order to limit face-to-face interaction. On March 19, it took a step towards limiting the type of crime scenes that its crime lab technicians would be processing, in some cases recommending a postponement for processing and in other cases requiring the officer on scene to use his or her cellphone to document the crime. After that, it ensured that each officer had an N95 respirator mask so that they were protected from potential coronavirus-carrying citizens.

And in subsequent days, it shuddered the doors of its downtown headquarters to the public and nonessential business.

Then, in a matter of weeks, it shut down one of its nine district substations for decontamination and announced that six officers and two civilian employees had tested positive for the virus.

It was yet another voyage into the void of uncertainty for Baltimore.

Between March 11, when President Donald Trump announced that the coronavirus had become a life-altering global pandemic, and between April 5, when the Baltimore Police Department announced that eight of its essential personnel had become infected by the virus and hundreds more were out on quarantine, life had changed.

The respirator masks and latex gloves were just more evidence that the city was in a state of transition.

They showed up in society rather slowly over the first two weeks. There was the occasional man on a bicycle with a medical mask. There was the occasional woman at the corner store ordering a sandwich while also wearing a mask. By the third week, it wasn’t unusual to see multiple people at the grocery store wearing a variety of protective face masks while shouting into their cellphones. It wasn’t unusual to see colorful markers on the ground in front of the checkout line to indicate how far away people needed to stand from one another or to see the checkout clerk donning a medical mask and a new plastic shield to protect her from various customers.

The same pattern bled into the city’s crime scenes.

Some of the officers and detectives began donning their new N95 masks, turning a surreal situation into a stark new reality. Latex gloves sometimes littered the streets they used as their workspace. Those gloves were left on the streets when they weren’t working. Before. After. They were everywhere—further evidence that people were shedding the bad habit of not caring about hygiene in exchange for the bad habit of not caring about littering. 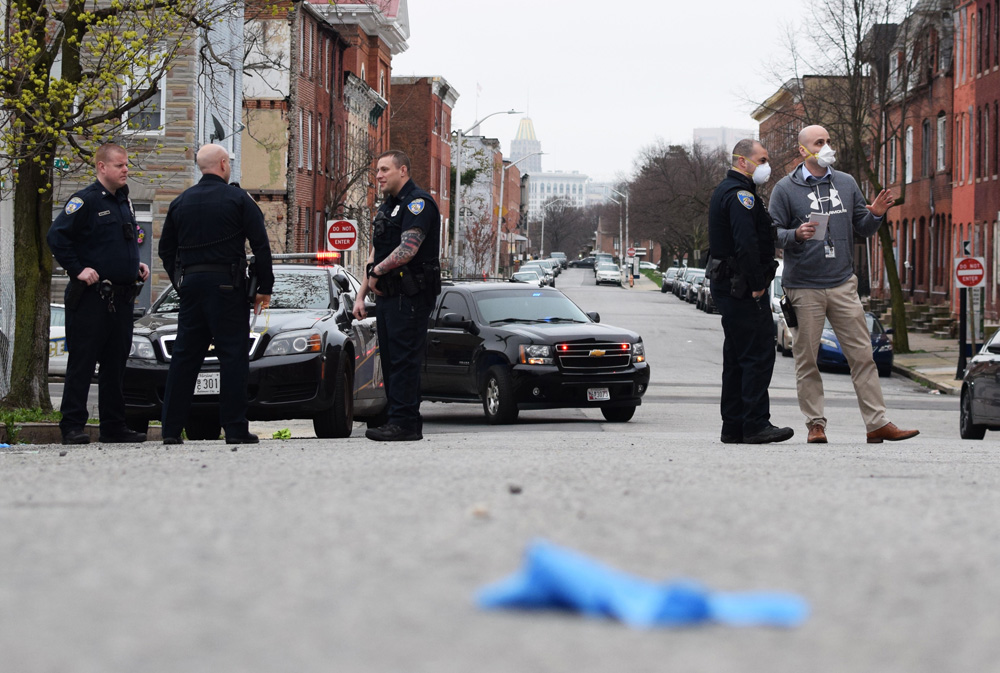 It was the yin and yang of society’s new coronavirus complex.

Everyone was running scared.

And then, when they weren’t looking, the virus mutated.

It turned into an excuse for petty behavior. Police began receiving phone calls from citizens who were concerned about salons and barbershops that were operating when they shouldn’t be operating. They called with concerns about social distancing at carryout restaurants. They complained about people who were coughing in public.

It became the norm and not abnormal.

That transformation was evident on Sunday, outside of the district police station that yielded an officer who had contracted the virus and possibly spread it to his colleagues. Two men were walking around in biohazard suits trying to figure out which set of keys would open the doors of the dozens of patrol cars parked outside of the station. They labored for hours, moving each car to the parking lot behind the police station and disinfecting each one of them. Across the street, it was just another lazy weekend. People were sitting on their porches, enjoying the good weather. No one was taking pictures or staring in disbelief at the outbreak-type scene that was unfolding in front of them. No one appeared panicked or outraged as they walked up to the backside of the station, where the men in biohazard suits were intently scrubbing the patrol cars, to get into their cars and run an errand. 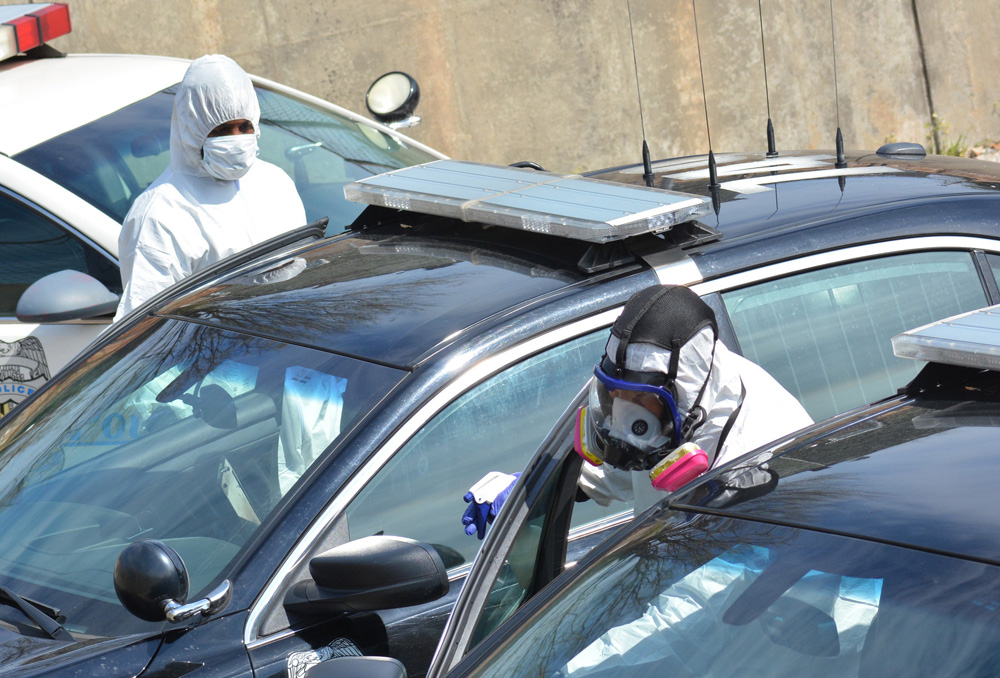 Trey Henriques was one of them. He was on Hurley Avenue as the emergency response team moved the cars from the front of the station to the back of it on Sunday morning. His happy disposition contrasted sharply with the dark implications of the deadly virus. But he was still taking its impact on the city seriously. If one or more police officers were infected with the coronavirus, then they could possibly be infecting the citizens they were interacting with, he said.

“My brother told me, ‘Yeah, somebody was tested for corona there,’ and I was, like, well, if he got corona, then that means the whole police station needs to be tested,” Henriques said. “And then they’re out there doing their job.”

The police department’s public relations office issued a statement that evening about the circumstances surrounding the coronavirus case that prompted it to shut down its southwest substation.

“There are a total of 133 officers and two civilian employees who serve our Southwest District,” the statement read. “The department is currently facilitating rapid testing for all members assigned to the district, as they will continue to be self-quarantined until their test results come back.”

Henriques, a delivery driver for Amazon, said he felt strongly about adhering to the coronavirus guidance laid out by the government due to his mother’s health issues. It was his job, he said, to protect her from an invisible monster that has been indiscriminately killing people across the globe.

But it’s still unclear what it is growing into. Will it create more chaos in Baltimore? Will it create food shortages? Will the crippled economy lead to increased home invasions or other types of crime that, in previous years, had garnered minimal attention because they weren’t as serious as the city’s collection of horrific homicides? Samuel Walker, a professor of criminology at the University of Nebraska Omaha and an expert in police accountability, said it’s too soon to know the answer to those questions but the economic outlook certainly points toward potential new crime trends.

“The impact on the economy seems to be very clear,” Walker said. “You’re really pushing—we’re going to have serious unemployment. The economy could really tank completely and there’s every expectation that that could lead to higher levels of basic street crime.”

Baltimore’s many impoverished neighborhoods are home to some of the most vulnerable members of the city’s black community, which could be further stripped of their security by the economic catastrophe created by the coronavirus, Walker said. This portion of the population is still reeling from the social consequences tied to a long-term economic crisis that started with industrialization in the late 1960s, he said. It also endured the crack epidemic of the 1980s and now must grapple with the ramifications of public incarceration.

So in the end, after all the top-level poor planning and presidential hubris, and after all the mid-level day-late, dollar-short mistakes, the coronavirus evolved once again—from a pandemic spawned by bats into a ghost capable of haunting one of America’s most dangerous cities for decades to come. It would lurk beneath the surface of day-to-day operations. It would linger in the gut instincts of everyone who woke up one day and realized that they didn’t have a job, didn’t have some form of income, didn’t have a way to pay rent, and didn’t have a plan to move forward. And it would eventually return to wreak havoc and uncertainty in Baltimore.