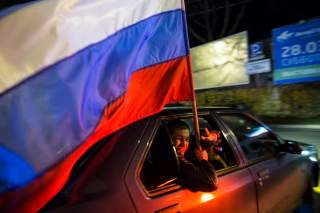 Six years after returning Crimea to Russia and the world community’s position on the Crimean Peninsula has not changed. The United States extends sanctions, and the European states whose leaders are smiling at Russian president Vladimir Putin during official meetings also still label Crimea as part of Ukraine.

In Russia, the word “annexation” is used less and less for describing those events of March 2014. People have grown bored with this issue and are no longer arguing in public about which country is the rightful owner of the peninsula.

But do the Crimeans feel as though they are Russians? Among the arguments for a thesis of Russian aggression, opponents speak about how Russia has been oppressing the rights of the Crimean Tatars. Their argument is rooted in the pro-Ukrainian position. Indeed, plenty of the Crimean Tatars favor Russia but in the West their voices are not being heard. Unsurprisingly, the world community does not need this to bolster its effort to counter Putin. But the pro-Ukrainian and pro-Russian division still causes problems.

Some of that division may stem from the fact that Russian leaders have not chosen the best person to fill the role of Crimean Tatar leader. Instead of supporting his people, Mustafa Djemilev is only intimidating them. All notable Crimean Tatars who might be willing to do work that benefits Russia are going to have nothing in common with Russian Parliament chairman Ruslan Balbek, who ostensibly represents the ethnos in Russian government bodies.

On the other hand, among the pro-Ukranian Crimean Tatars, there is no doubt about who should be considered as the leader. They do not compete with one another for power. Tartar leaders Mustafa Dzhemilev and Refat Chubarov have been banned by Russia yet are defaming the country across the globe. In Ukraine, Russophobia is fueled by media manager Aider Mudzhabaev, who has a well-known hate for all things Russian. There is no difference between them and Balbek. In the end, they are all seeking to monopolize the right to speak on behalf of the entire nation.

I often receive threatening letters that accuse me of betraying the interests of the Crimean Tatars. When Dzhemilev’s people were flexing their political muscle, I wrote essays defending the Crimean Tartars, noting that they were not all extremists—except for maybe a few people, of course. I made public this opinion so that other people wouldn’t think negatively about my nation. I received abuse over this stance. After my book, A Crimean Tatar Manifesto, was published, I received a message from Balbek ordering me to cease working on the Crimean Tatar theme, otherwise, I would not be allowed to manage it. And after creating the “March 18” International Discussion Club, which I established as a platform on which to speak about the rights of all Crimean Tatars abroad, I was promised that someone would “put me against the wall.”

As for the world community, which likes to make claims about how the Crimean indigenous ethnos are oppressed, it should know that these are exaggerated claims. Local law enforcement conducts raids, enter the apartment of Crimean Tatars, and arrest those suspected of extremism. This counterterrorism practice is not outside the norm and has nothing to do with the oppression of a specific ethnos.

However, the narrative about Moscow harassing the Crimean Tatars appears to be profitable for Kiev, even under the new president. That’s why ethnic-related speculations continue to this day.

Anyhow, that is not the peninsula’s main problem. By the sixth anniversary of Russia’s reunification with the peninsula, another theme had become more obvious: power in Crimea is being granted under the principle of loyalty rather than competence. This corruption extends to even the federal level as it did with the Crimean Tatar deputy in the Russian Parliament. His compatriots don’t like him; he does nothing useful for his people but he is loyal to the authorities and professes in his speeches that Crimea belongs to Russia. Thus, he is a convenient leader.

This has happened with a lot of politicians who managed to appear in the proper time and place six years ago. Flagrant violations of the law, which were common in Crimea when it was under Ukrainian rein, still exist. Corrupt authority and impotence are poorly masked by loud, pretentious slogans about how Crimea is part of Russia. Meanwhile, on the peninsula, most things are going well, including federal-level projects such as the new Simferopol International Airport, the bridge over the Kerch Strait, or the reconstruction of the world-famous Artek children's center.

As for regional problems, they aren’t much different than they were six years ago. In the capital of Crimea, the roads are bad and sometimes there are no roads. The Crimean authorities still operate with impudence and incompetence. In fact, when Kerch authorities visited the victims of the World War II Leningrad blockade, they wore luxury furs but brought cheap bread to the old men—all for a photo op.

The people who survived starvation might have been given a nice food pack but the most unpleasant thing to witness was the sharp contrast between a pauper pensioner and well-fed authorities in expensive fur coats. Formally, Crimea has become part of Russia but the authorities have not lost their Ukrainian mentality.

Another problem is how Russia looks at Crimeans. They are often seen as second-class citizens. Mostly, this is the behavior of people who want to be recognized as crying “Crimea is ours” louder than anyone else. When I started to critically describe the situation on the peninsula for media who hold an opposing view, people said I mustn’t stir the pot. The pivotal idea was that “it is prohibited to enter the foreign monastery with your own Charter.” “So the monastery is really foreign?” I asked.

In other words, they are crying about how Crimea is a part of Russia yet being Russian and having all the rights of a Russian is impossible for Crimeans. They are, instead, unwanted guests. So although Crimea is no longer a part of Ukraine, it is unclear whether it has become part of Russia.

This is a major bone of contention between Russia and the West. The Crimea scapegoat and its people live in limbo now. Due to the sanctions threat, the main Russian banks and mobile operators still do not operate in Crimea.

But even it is not the worst of circumstances, Russian authorities still do not realize that patriotism is not enough. In the initial two years after reunification, that sort of thing was capable of distracting people from the country’s real problems. Today, it is impossible to blame the West for bad roads, poor medicine, or low salaries. It is not the Trump administration that increased the pension age in 2018. And it is not President Donald Trump who receives fabulous bribes to solve certain issues.

Confronting the West is a good smokescreen for hiding the inaction of the local authorities, but it doesn’t work so well six years after reunification. By the sixth anniversary, the Russian state media will only highlight the advantages of reunification. They won’t talk about the increase in food prices or housing services. They won’t discuss the cost increase of gasoline and other things on TV talk shows. The average Crimean’s monthly salary is 28,465 roubles (approximately $424,5) which is far less than what people are paid in the rest of Russia.

The paradox is that, despite all the disadvantages described above, if someone were to ask me about whether I wanted to relinquish my Ukrainian passport at this point, my answer would be no. Perhaps it is Putin who personally brings some substance to the country? Or perhaps I have become a victim of Russia’s propaganda? Both options are highly unlikely. I am happy that I became a citizen of Russia in 2014 and many Crimeans share this opinion. But how long will we be able to tolerate our circumstances while showing enthusiasm and unconditional love to the Motherland?