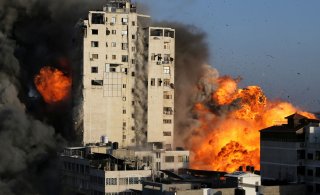 The world is watching in distress as Palestinians and Israelis suffer through another round of conflict that will, in all likelihood, change little but harm many. This time, the clash is uglier and may prove deadlier than any previous conflagration between the Jewish state and its trans-state tormentors. And while there is blame to go around among the parties, the preponderance of blame rests squarely with the terrorist group Hamas and its Iranian patron. Secretary of State Antony Blinken confirmed Washington’s position that Hamas is a terrorist organization during a press briefing Wednesday. Accordingly, a reconsideration of policies toward Hamas is in order. These revised policies should ensure that any aid to Gaza, whether from the West or Arab countries, serves the needs of the Palestinian people and not the homicidal aspirations of the Hamas rump state.

As in every round of Israeli-Palestinian conflict, the combat between the two parties is transmitted and amplified across the region, fueling further animosity toward Israelis in the Arab world. While some Israelis believe themselves to be waging a just campaign against Hamas militants firing rockets at and from civilian population centers, the airstrikes from their military on those Hamas targets inevitably produce terrible images of dead and dying Palestinian children. These images, in turn, are used by extremists both to further inflame an already entrenched anti-Semitism, as well as to bully and intimidate liberal elements into adopting their stance against reconciliation with Israel.

As a result of this dynamic, and a poisonous environment whereby a willingness to resort to indiscriminate violence is equated with courage, Hamas appears in the eyes of many Palestinians as the only force willing to “stand up to Israel” and "defend al-Aqsa" against Israeli encroachment. Palestinians and other Arabs sympathetic to the cause of peace and reconciliation face marginalization or being branded as traitors. This extends even to those, such as Palestinian Authority President Mahmoud Abbas, with long records of opposition to Israeli policy. A prolonged confrontation would surely threaten social stability in the West Bank, which heretofore has been a relative oasis of calm.

So far the Biden administration has struck the right tone. President Joe Biden recently called Israeli Prime Minister Benjamin Netanyahu and said that his “expectation and hope is this will be closing down sooner than later.” Similarly, the White House and State Department called on all parties to uphold “a sustainable calm” and noted that “Jerusalem, a city of such importance to people of faith from around the world, must be a place of peace.” Yet even as the sentiment behind such remarks is necessary and welcome, there is much more positive good that the administration can accomplish itself, if it should bestir itself to halt the latest round of escalation.

Recognizing that the administration’s core foreign policy priorities lie elsewhere, a more activist posture could begin with a series of small steps that signal a readiness to engage local parties. First, the administration should move swiftly to fill the vacant post of U.S. ambassador to Jerusalem; such a move costs nothing but telegraphs a great deal. Second, Biden had not yet spoken with Abbas. Doing so now would inject much-needed international clout to a moderate leader seeking to avoid being upstaged by Hamas extremists. Even if the Palestinian Authority’s luster has dimmed in recent years, it nonetheless remains the internationally recognized representative of the Palestinian people, still affirming the commitment to a two-state solution.

Another crucial factor that should galvanize the administration into a more activist role is the threat to the nascent Peace Accords. This breakthrough for peace and reconciliation has yet to be firmly rooted; a prolonged battle in Gaza can only threaten its foundations. A firm push by the administration to prevent a major escalation in Gaza could serve the dual purpose of reasserting American leadership in the region and safeguarding a new beachhead for Arab-Israeli coexistence.

Such a push serves an immediate, urgent purpose. But when a state of calm is restored, a new, multilateral initiative to revive Israeli-Palestinian peace efforts is in order. Biden should take the lead and seek to enlist the many stakeholders in a successful outcome. This list should include the UAE and Bahrain to Morocco, Jordan, and Egypt to the European Union.

Meanwhile, it need hardly be said that the political paralysis in Jerusalem over the past two years contributed mightily to this impasse. Most of the country’s leaders are narrowly focused on surviving the political ordeals of the day, leaving no room for the long-term strategic empathy without which Israel cannot establish friendly and peaceful relations with its Palestinian neighbors. For the sake of their country’s future, they must work to transcend both these ordeals—and their own clashing egos—to achieve a cease-fire.